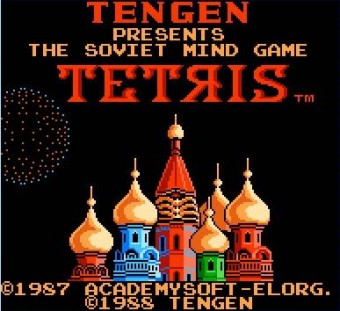 Today I found out the rights to the game Tetris were originally owned by the Soviet Union.

The game was created by Alexey Leonidovich Pajitnov, with the assistance of Dmitry Pavlovsky and Vadim Gerasimov who ported it to an IBM PC, and was released on June 6, 1984.  At the time, Pajitnov was working at the Dorodnicyn Computing Center, which was a part of a Soviet government funded research center in Moscow, called the Soviet Academy of Sciences.  Because Pajitnov was working for the government and was using their equipment when he created Tetris, they retained the rights to the game in the beginning with no royalties being paid to Pajitnov.

The game was a huge hit within the USSR almost immediately, being given away freely by the Soviet Union throughout Eastern Europe and the USSR.  Within a year of its launch, it spread to Western Europe and by 1987 spread to North America.

At this time, the Soviet Union set up a company called Elorg (Elektronorgtechnica) to manage the licensing of Tetris throughout the world, which they tended to fail at spectacularly, in terms of actually collecting any royalties. Many companies simply licensed the game out themselves despite never having been granted rights to it in the first place. The most notable instance of this was the British Andromeda company. While they were negotiating to get the rights to sell the licensing rights to the game, they went ahead and started selling it.  After failing to acquire the rights to do what they had already done, they simply kept selling the rights to the game anyway.

In any event, by 1988, the game became a huge hit in the United States on the computer and NES, combining for over two million copies sold.

After the Soviet Union was dissolved in 1991, Pajitnov moved to the United States, but the Russian government still maintained licensing rights to Tetris.  Finally, in 1996, the rights to the game were passed to Pajitnov, who was at the time working at Microsoft (from 1996 to 2005).  Pajitnov then set up The Tetris Company with Henk Rogers as his business partner, finally receiving royalties for the game he’d created 12 years before.

And now for your enjoyment: The Tetris God: