This Day in History: A Proposal by the Joint Chiefs of Staff Suggesting That the U.S. Military Should Commit Acts of Terrorism in the U.S. and Blame it on Cuba is Presented to the Secretary of Defense 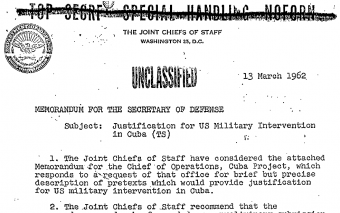 On this day in history, 1962, the chairman of the Joint Chiefs of Staff, General Lyman Lemnitzer, submitted a proposal to the Secretary of Defense, Robert McNamara, developed by the Joint Chiefs and the Department of Defense, outlining plans to commit various acts of terrorism on U.S. soil and then to frame the Cubans for it.  The end goal of “Operation Northwoods”, which this proposal was a key component of, was to create justification for going to war with Cuba.

Specifically, this proposal, not surprisingly titled Justification for U.S. Military Intervention in Cuba, stated their reasoning behind this and other drastic suggestions outlined in the document was as follows:

The suggested courses of action appended to Enclosure A are based on the premise that US military intervention will result from a period of heightened US-Cuban tensions which place the United States in the position of suffering justifiable grievances.  World opinion and the United Nations forum should be favorably affected by developing the international image of the Cuban government as rash and irresponsible, and as an alarming and unpredictable threat to the peace of the Western Hemisphere.

Having outlined their reasoning, they went on to suggest a variety of things the U.S. government could do to make the Cuban government look like they were actively attacking the United States.  They would start by spreading rumors of Cuban descent against the U.S. and other Western countries.  They’d then create a series of incidents in Guantanamo where they’d have “friendly” Cubans attack the U.S. base there, starting riots, lobbing bombs into the base, and other such acts of sabotage. These groups would be supplied and under the command of the U.S., empowered towards this end.  Next, they’d execute a series of escalating operations against the U.S., framing Cuba for each one.

Most of these plans, while shady to the extreme, didn’t actually involve harming anyone directly (though obviously instigating a war on people who weren’t directly provoking it would cause harm to many thousands.)  These types of plans generally involved the U.S. military making it look like Cuba had attacked some ship or plane or the like, publicly resulting in deaths, when in fact these would just be unmanned drones that were destroyed by U.S. forces disguised as Cuban forces.  Alternatively, they suggested in some cases using actual Cubans who were friendly to the U.S. to carry out the act or encouraging or bribing unfriendly Cubans to attack the United States. (Note: that’s also known as treason.)

One such suggestion outlined chartering a civil airliner and loading it with “college students” who would be a group of passengers with “carefully prepared aliases.”  Another plane, which would actually be a drone that looked just like the civil airliner, would then rendezvous with the real plane along the flight path.  The real plane would then secretly land, allowing the drone to continue on towards the ultimate destination of the passenger plane.  This drone would then be shot down by the U.S. military over Cuba, with the U.S. military jets disguised as Cuban planes.  The “pilot” aboard the drone would then put out a distress call stating the plane was under attack by Cuban MIGs before cutting off communication.  The Joint Chiefs particularly wanted to make it so that the U.S. wouldn’t be the first to publicly learn of this attack, but would be informed by other countries, so it wouldn’t appear that “the US [was] trying to sell the incident.”

Probably the most disturbing of all the suggestions was as follows:

We could develop a Communist Cuban terror campaign in the Miami area, in other Florida cities, and even in Washington [D.C.].

The terror campaign could be pointed at refugees seeking haven in the United States. We could sink a boatload of Cubans en route to Florida (real or simulated). We could foster attempts on lives of Cuban refugees in the United States even to the extent of wounding in instances to be widely publicized. Exploding a few plastic bombs in carefully chosen spots, the arrest of Cuban agents and the release of prepared documents substantiating Cuban involvement, also would be helpful in projecting the idea of an irresponsible government.

Had the U.S. actually done any of the things in this proposal, the “irresponsible government” and the previous “developing the international image of the Cuban government as rash and irresponsible” bits would have been particularly farcical.  Luckily, though this proposal met with the approval of the Joint Chiefs of Staff, President Kennedy wasn’t so pleased with it and rejected it wholly and further told General Lemnitzer that the U.S. would not be going to war with Cuba, something the military and CIA had been strongly pushing for since Castro had taken over there in 1959.  General Lemnitzer was shortly thereafter let go as the Chairman of the Joint Chiefs of Staff when his term expired.  The result of Kennedy rejecting this and other similar proposals was that he progressively became more unpopular throughout the military brass, particularly for being “soft on Cuba.”