Why Greenland is an Island and Australia is a Continent 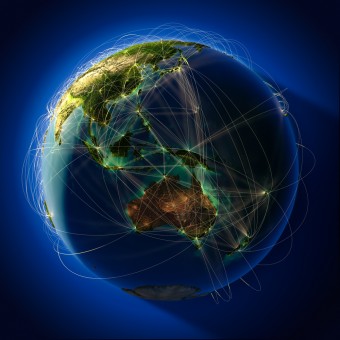 Today I found out why Greenland is an island and Australia is a continent.

There are several different ways of thinking about how many continents there are, with models ranging from 4 to 7 continents. However, in most English speaking countries, as well as other nations around the world, the 7-continent model is taught. Using this model, the continents of the world in order of size (descending) are: Asia, Africa, North America, South America, Antarctica, Europe, and Australia.

Australia and Greenland have quite a few features in common. People living in both countries largely live along the coast due to nearly uninhabitable land covering each of the countries—in Greenland, the natural barrier is an ice cap, while in Australia it’s a desert. Australia is an island in the South Pacific, roughly 7.75 million square kilometres (about 3 million square miles) and the sixth largest country in the world. Greenland is an island that sits between the Arctic Ocean and the North Atlantic Ocean. It is just over 2.16 million square kilometres (834K square miles), making it the twelfth largest country in the world. Greenland is the largest island after Australia—so why isn’t it considered a continent, too?

It turns out that there are no official conditions that each continent has to meet in order to be considered a continent, which explains why there are so many different models of thinking when it comes to how many continents there are. However, there are several largely accepted factors that classify different regions of the world as continents. These factors include tectonic independence from other continents, unique flora and fauna, cultural uniqueness, and local belief in continental status.

Looking at Australia and Greenland, Australia meets several of these conditions. Australia rests on its own tectonic plate called the Australian Plate. It certainly has its own unique flora and fauna, with native animals like kangaroos, wombats, and Tasmanian Devils unlike any others in the world. Australia’s historic aboriginal culture is also somewhat unique. Currently, the country is more “Western” in ideology than most other countries in the South Pacific region, making it a unique culture in its area. Lastly, the locals consider themselves to live on both an island and a continent, fulfilling the last of the criteria.

Greenland, on the other hand, sits on the North American tectonic plate. It is not geologically separate from Canada, the United States, and Mexico. Although Greenland has fifteen unique species of plants, its fauna, such as reindeer, polar bears, and arctic foxes, can also be found elsewhere, such as in Canada. While Greenland does have its own culture, it is considered part of the larger North American arctic culture. Finally, Greenlanders do not, for the most part, believe that they live on a continent. They consider themselves islanders.

These definitions are shaky, however. Looking at a map of tectonic plates, you can see that Europe sits on the Eurasian Tectonic Plate along with most of Asia. Only cultural difference and a feeling of separateness defines it as a separate continent. Similarly, India has its own tectonic plate as well—but in this case, a sense of similar culture and flora and fauna makes India part of Asia rather than its own continent.

It seems that to be a continent, an area must fulfill most of the unofficial criteria above if it doesn’t fulfill it all. In this case, Australia succeeds where Greenland does not, and a line is drawn between what makes the smallest continent and the largest island.