The Bizarre World of Animal Reproduction 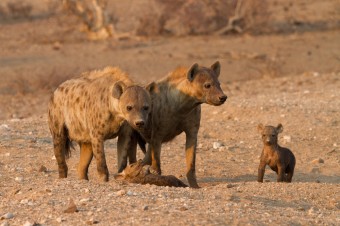 As weird and whacky as some human mating practices can sometimes be, other animals’ reproductive habits can be even stranger at times.  While one species gives birth through a penis, another’s testicles’ explode after sex. Further, post-coital cannibalism and V-shaped penises are not all that uncommon.

We’ll start with the hyena.  Depending on if you notice her udders, the female spotted hyena looks either like a male or a hermaphrodite. Being neither, the female hyena, like other mammals, has a uterus, ovaries, udders, labia and clitoris; unfortunately (or not, depending on your interest), the hyena’s clitoris is super long and frequently becomes erect – giving her the appearance of an aroused male. On top of that, her labia are formed in such a way, with a fold and connective tissue, that they strongly resemble a scrotum. Nonetheless, those aren’t the family jewels, they’re just strangely built lady parts.

Weirder still, the female hyena’s clitoris, often referred to as a pseudopenis because of its resemblance to the real thing, is used for urinating, copulating and giving birth; this means she pees through it, but also, during mating, the male hyena inserts his penis directly into it. Later, when it’s time to give birth, the baby is delivered through the clitoris; in order to accommodate intercourse and delivery, rather than being erect, the pseudopenis becomes flaccid, thin and elastic.

In fact, a number of animal species have a pseudopenis, including lemurs, squirrel monkeys and some birds. Although with the lemur and monkey, the pseudopenis is a female characteristic, when it is seen in birds, it is a trait only seen in males. Most bird species, up to 97%, do not have a penis or other phallic structure; rather, they mate by pressing together an opening on their bottoms whereby the sperm is transferred via a “kiss.” Known as the cloaca, like the hyena’s clitoris, it is used not only in reproduction, but for defecation and urination as well.

On the subject of pee, male giraffes drink the urine of the female shortly before they have sex; according to experts, the male giraffe can detect if the female is in estrus (i.e., in heat) from her golden shower. Female giraffes gestate their fetuses for at least 13 months, and then give birth standing up. Typically, only one male in a herd gets to impregnate the females, almost always the one with the longest neck.  The rest of the time, the males tend to just like having sex with one another, with an estimated 74%-94% of all male giraffe mating being with another male.

With bees, it is the sole queen, who obtains her throne by ruthlessly killing her rivals, who gets her choice of mates from among the male drones in the colony. Rare, dramatic and violent, bee copulation (and the drone’s life) ends when the male’s genitalia explode within the queen. The queen will continue to mate over a series of flights with up to 40 drones and puts their semen in storage to be used to produce fertilized eggs over the rest of her life.

Like bees, black widow females are renowned for killing their mates after sex; although with the widow, she’s reputed to eat the male rather than causing him to blow up. Experts note, however, that of the numerous species of black widows in the world, only one engages in cannibalism routinely, and she lives in the Southern Hemisphere. Of the three American species of black widows, only one eats her mates, and then only occasionally. Similarly, although female preying mantises are reputed to engage in post-coital cannibalism, this is only very rarely observed in the wild.

Flatworms also like rough sex, but unlike bees, spiders and mantises, no one dies at the end. These sea slugs are hermaphrodites, so when it comes time to reproduce, one has to be the bottom and the other the top. To decide, they spar with their penises, and the one who is stabbed receives the sperm and bears the babies.

Some other animals get to be both sexes but not at the same time. The clownfish is born male, but when it matures, it can turn into a female if necessary. Nemo and his kind live in groups where only one couple gets to have sex, so when that female dies, one of the larger males transforms into a female and the cycle continues. Similarly, some frog species will have members of a population change sex, either from male to female or female to male, in order to maintain the proper proportion of each gender to ensure the success of the group.

More than just the pouch separates marsupials from the rest of the mammalian kingdom. Female marsupials have two uteruses, as well as three vaginas: two for intercourse and a third for delivering babies. To properly tend to the ladies, the male marsupial has a two-pronged penis. Unlike other mammals, marsupial fetuses gestate for only about a month before they are born. Of course, they hide in the mother’s pouch for a good long time until they are sufficiently developed.

Whether it’s with pee, dueling organs or simply changing sex, animals go to great lengths to make babies and propagate their kind. Perhaps examples of evolution or simply God’s jokes, these weird ways of reproduction have helped species thrive for millions of years. Who are we to judge?