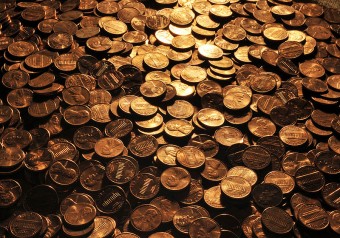 Today I found out that it currently costs more than double what pennies and nickels are worth to produce them.

In 2006, the U.S. Mint sent a letter to Congress informing them that for the first time in history, it cost more to produce a penny and nickel than the coins themselves were worth. Including materials, machinery, labor, shipping, and other such costs, they estimated it would cost 1.23 cents to produce a penny and 5.73 cents for a nickel at that time.

The situation has since become much worse. In 2007, the costs association with producing a nickel swelled to 9.5 cents.  Currently, it costs about 2.4 cents (1.1 cents in metals) to produce a penny and 11.2 cents (6 cents in metals) to produce a nickel. Because of this, the U.S. mint regularly receives calls from citizens to find out the exact amount of the materials in them and the legality of melting down the coins to sell for profit. The mint became so nervous about the potential for mass hording and melting down of coins that it enacted new rules to prohibit the practice. These new rules made it illegal, with a few exceptions, to melt down or export large amounts of U.S. coins. Specifically, you are only allowed to take $5 in these coins out of the country or ship $100 worth of them at any one time. Punishment for violating these laws will get you up to $10,000 in fines and up to 5 years in prison.

Because the value of the materials exceeds the value of the coin, whether to change the composition of these coins or just get rid of them altogether has been hotly debated in many political circles.  However, because the U.S. Mint is one of a few governmental agencies allowed to make a profit and they overall make a huge profit on all the coins they produce, so far nothing has been done to change this situation.

How the system works is that when the Federal Reserve wants to release more of these coins into circulation, it buys them from the Mint at face value. If it costs less to make the coin than it’s worth, then the Mint will profit. If not, then the Mint will take a loss. The Mint is able to continue producing these coins at a loss because they make such a huge profit on other coins, such as quarters, which only cost around 9 cents to produce, and half dollars, which only cost around 15 cents.  Even more profitable are dollar coins, which only cost around 10 cents to produce. All this has resulted in the U.S. Mint typically making a huge profit on coins, despite the penny and nickel.  For instance, in 2005, the total profit for the U.S. Mint was $730 million. The loss taken by producing pennies and nickels that year was estimated at only $45 million.

In 2012, it is estimated that this loss will swell to $100 million.  This may change soon as President Obama’s proposed budget for the United States in 2013 includes a mandate that the Treasury Department change the composition of pennies and nickels so that they won’t cost more than they’re worth. However, it should be noted that the President brought this same issue up in 2010, but it ended up being shot down, largely thanks to heavy lobbying by a variety of different business groups who would be negatively impacted by the switch.