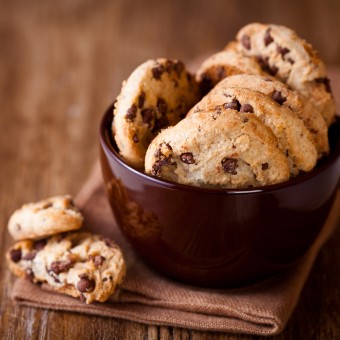 It’s difficult to imagine that the chocolate chip cookie, one of the world’s most beloved sweet treats, was actually invented by accident. The invention of the chocolate chip cookie happened in 1930 when Ruth Graves Wakefield and her husband, Kenneth, were running the Toll House Inn on Route 18 near Whitman, Massachusetts. Mrs. Wakefield, a dietician and food lecturer, prepared all the food for the guests at the inn and had gained an enviable local reputation for her impressive range of desserts.

It’s often said that necessity is the mother of invention, and so too it was in this story. One night, Ruth decided to whip up a batch of Chocolate Butter Drop Do cookies, a popular old colonial recipe, to serve to her guests. But as she started to bake, Ruth discovered she was out of baker’s chocolate. Ruth then chopped up a block of Nestlé semi-sweet chocolate that had been given to her by Andrew Nestlé of the Nestlé Company. Ruth had expected the chocolate to melt and disperse through the cookie dough as regular baking chocolate would. Instead, the chocolate pieces retained their individual form, softening to a moist, gooey melt, and the world had its first known chocolate chip cookie.

These original chocolate chip cookies proved to be such a scrumptious success that Ruth had no choice but to repeat the recipe. She called her new invention the “Chocolate Crunch Cookie” and published the recipe in several Boston and New England newspapers. When Ruth’s Chocolate Crunch Cookie recipe was featured on an episode of The Betty Crocker Cooking School of the Air radio program, the popularity of the humble chocolate chip cookie exploded and the cookie soon became a favorite all across America. The popularity of the cookie further increased after Ruth published the still popular, Toll House Tried And True Recipes, featuring the “Toll House Chocolate Crunch Cookie”, in 1936.

Due to the enormous popularity of the cookie recipe, sales of Nestlé semi-sweet chocolate skyrocketed and Andrew Nestlé and the Wakefields struck a deal. In exchange for a lifetime supply of free chocolate, Nestlé printed Ruth’s recipe, by this stage called “Mrs. Wakefield’s Toll House Cookies”, on the chocolate labels and even started to score their chocolate bars and include a special chocolate chopper so people could easily make the chocolate chips for their cookies. This continued until 1939 when Nestlé introduced their own brand of conveniently pre-chopped chocolate- the small chocolate buttons still known today as “Nestlé’s Toll House Chocolate Morsels”.

The original recipe is still printed on their bag of chocolate chips. Nestlé owned the rights and took all profits from the “Toll House Cookie” until 1983 when ambiguities were discovered in the original agreements with the Wakefields and Nestlé lost their exclusive rights to the trademark.  From that point, “Toll House Cookies” became a descriptive name only. The name “Toll House”, however continues to be a subsidiary brand of the Nestlé Company and is still used on Chocolate Morsels, chocolate chip cookie dough, and coco powder- all products coming from that one, off the cuff baking decision and accidentally delicious result.

Set oven to 375° F. In a small bowl, mix flour, salt and baking soda and set aside. In a larger bowl, cream butter and sugars and add vanilla extract. Blend until smooth and creamy. Add one egg and beat well. Add the second egg and beat well. Gradually fold in flour mixture and stir in chocolate pieces. Drop a tablespoon size dollop onto baking sheets and bake cookies until golden brown or for around 10 minutes. Remove from oven and allow to cool on trays for 2 minutes before transferring to a wire rack to cool completely.