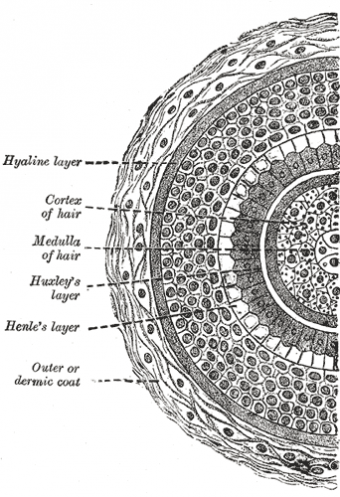 Today I found out that there isn’t any difference between fur and hair; it’s all just hair.

We tend to refer to a lot of animal hair as “fur”, while referring to our own hair as just “hair”.  It turns out though that hair and fur are chemically indistinguishable, both made up of keratin.

The argument that is often cited as to why there must be a difference is that human hair will just keep growing forever, while most animal “fur” stops at a set length.  In fact, the latter is true, but the former is not.  Human hair will stop growing after a certain period and with your scalp at least, it tends to be a longer period than with many animals, though it varies on different parts of your body.

The maximum length of hair on various parts of your body is entirely determined by your genetics and varies widely from person to person and animal to animal.  Each hair follicle has a period of growing and not growing.  During the anagen period your hair grows.  During the catagen period, your hair stops growing and the outer root sheath shrinks and the root of the hair is cut off from its blood supply and from the cells that produce new hair.  This is followed by a telogen period, where more or less the follicle is resting.  Eventually your hair falls out and the whole cycle starts again.

For humans, a typical anagen period for your scalp hair follicles will last between 2-7 years; the resting phase, telogen, here lasts about 100 days.  On your arms and your legs, the anagen period lasts around 30-45 days.  This explains why the hair on your arms and legs doesn’t get that long compared to your head hair and more or less always seems to stay at a seemingly fixed length.

Various mammals have different growth cycles on their hair than humans do, thus why cat hair seems to stop growing at a certain, relatively short, length; not too dissimilar from the growth rate and length of the hair on a human’s arms and legs.  But in the end, hair and fur are chemically the same exact thing.  There is no difference other than what we chose to call “fur” or “hair”, which is often pretty arbitrary.

For instance, in many dogs with naturally short hair, it is typical to call this fur, though not always.  But if the dog’s hair gets naturally long, we tend to call this hair, even though the only difference is in the length of the anagen period of the hair follicle growth cycle.   Dogs such as the Poodle or Havanese tend to have a very long anagen cycle, which is why most pet owners will have their hair cut.  Other dogs, such as a Labrador, have relatively short anagen periods, so their hair never gets that long.