December 24, 2012 Scott
Maya asks: Why does Chemotherapy cause hair loss? 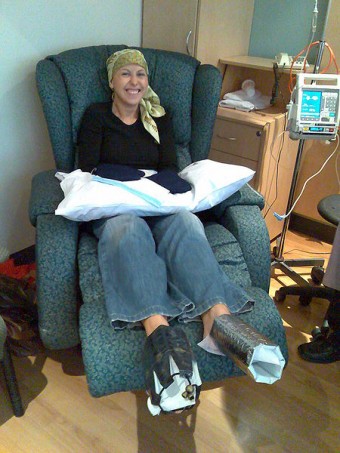 Maya I love the question. It seems like once or twice a year I’m shaving my head to help raise money for cancer research and at every fundraiser, the question seems to come up- Why does the common treatment for cancer make body hair fall out? The answer is really pretty simple. It has to do with how different types of Chemotherapy target cancer cells. There are many different Chemotherapy drugs that work in different ways, so I will only speak in general terms regarding their side effects.

Most cells in the human body divide using a process called mitosis. This process has 5 phases (prophase, prometaphase, metaphase, anaphase, and telephase). It is preceded by interphase, and results in the cell dividing, called cytokinesis. When a cell reaches the end of its lifespan, it gets destroyed in a pre-programed process called apoptosis.

There are many types of cancer (over 200). All types are a result of the same problem, unregulated cell growth. Cells that divide more rapidly than apoptosis can regulate- effectively, too much mitosis. The result is excessive tissue, known as tumors. These tumors can be localized, or they can spread to surrounding areas through your lymphatic system or your blood stream.

Many Chemotherapy drugs work by interrupting mitosis. Most Chemotherapy cannot differentiate between abnormal cancer cells and normal healthy cells.  Because of this, cells that have high mitotic rates (multiply rapidly) can also be affected by Chemotherapy- cells like those found in your hair follicles, the lining of your mouth, stomach, and those found in your bone marrow. The result can be hair loss, decrease in production of white blood cells (thus why cancer patients are immune-suppressed), and inflammation of your digestive tract. In the end, chemotherapy will hopefully kill the cancer cells, and in the process, unfortunately, potentially cause hair loss. However, the healthy cells of your hair follicles will repair themselves, making your hair loss temporary, as is hopefully your cancer!