What is the Origin of the Word “Tip”, as in Leaving a Tip 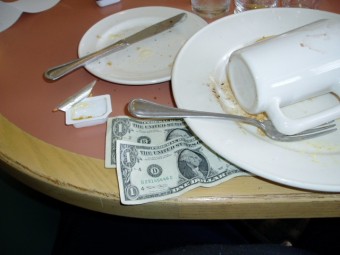 You may have heard that the few hundred year old definition of “tip”, as referring to gratuity, comes from “To Insure Promptness” or similar backronyms, but this isn’t correct.

In fact, pretty much anytime you’ve ever heard of a word that originated before the 20th century coming from an acronym, you can be almost certain that it isn’t true. As linguist David Wilton said,

There is only one known pre-20th-century [English] word with an acronymic origin and it was in vogue for only a short time in 1886. The word is “colinderies” or “colinda”, an acronym for the Colonial and Indian Exposition held in London in that year.

The real origin of the word “tip” is a bit more obscure than that. In terms of the “gratuity” definition, it most likely comes from a popular form of speech among thieves, beggars, and hustlers, called the “Thieves’ Cant” (also sometimes called “Rogues’ Cant”), which arose in Great Britain several hundred years ago with the primary aim of keeping non-thieves and the like from being able to fully understand what the thieves were talking about.

An example of this kind of talk, taken from The Vulgar Tongue (1857) is as follows:

I buzzed a bloak and a shakester of a reader and a skin. My jomer stalled. A cross-cove, who had his regulars, called out ‘cop bung’, so as a pig was marking, I speeled to the crib, where I found Jim had been pulling down sawney for grub. He cracked a case last night and fenced the swag. He told me as Bill had flimped a yack and pinched a swell of a fawney, he sent the yack to church and got three finnuffs and a cooter for the sawney.

I picked the pocket of a gentleman and lady of a pocket-book and a purse. My fancy girl stood near me and screened me from observation. A fellow-thief, who shared with me my plunder, called out to me to hand over the stolen property, so, as somebody was observing my maneuvers, I ran away to the house, where I found James had provided something to eat, by stealing some bacon from a shop door. He committed a burglary last night and had disposed of the property plundered. He told me that Bill had hustled a person and obtained a watch; he had also robbed a well-dressed gentleman of a ring. The watch he sent to have the works taken out and put into another case (to prevent detection), and the ring realized him three five-pound notes and a sovereign.

One such slang word in this Thieves’ Cant was “tip”, meaning “to give or to share”. The first documented usage of “tip” this way dates back to 1610.

At some point within the next century, this sense of the word spread to being used by non-thieves as referring to money given as a bonus for service rendered, with the first documented instance of this definition popping up in 1706 in the George Farquhar play, The Beaux Stratagem, “Then I, Sir, tips me the Verger with half a Crown…”

As to the ultimate origin of the word “tip” in English, meaning anything, it first popped up in the 13th century meaning “end, point, top”, probably from the Middle Dutch word “tip”, meaning “utmost point or extremity”.