There is an Octopus With a Detachable Penis 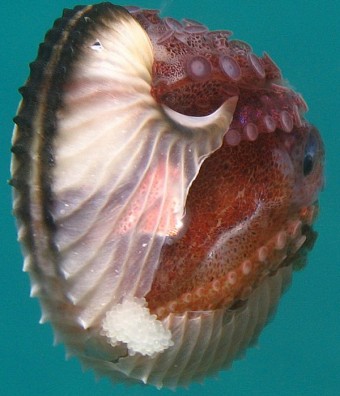 Today I found out there is an octopus with a detachable penis.

Known as the Argonaut, this male mollusc has a very sacrificial way of impregnating their female counterparts. The male has one arm longer than his others, known as a hectocotylus, which is used to transfer sperm to the female. The arm stores up the sperm, and when the male finds a female he wants to mate with, he will detach the arm during the mating process. Specifically, once the “arm” finds the pallial cavity of the female, it gets inserted. A “Funnel-mantle locking apparatus,” basically a Chinese finger torture device for the octopus, then keeps the arm from escaping.

The female will store the hectocotylus in her cavity. Unfortunately for this sea-faring Casanova, the male is only able to copulate once. The female, however, is capable of mating several times over her lifespan. In fact, females have been found that have several hectocotylus in their pallial cavity at the same time! (Eat your heart out Traci Lords!)

Female Argonauts are not in danger of a male liberal movement anytime soon. Fully grown females are only about 8 inches in length and the males are only around 1 inch.  Further, the males are typically around 600 times lighter than the females! There is also the problem of lifespan. Males die shortly after mating and the females move on and forget about the sacrifice.  Because of this, the females usually live for much longer periods of time than the males.

Just when you think the male persecution by their ferocious female flames couldn’t get any worse, until recently, it was thought that the hectocotylus found inside the females were tiny parasitic worms, rather than the penis of a male. These male octopuses could always use the classic “I was in a pool!” excuse, I suppose, as they do live in cold water!