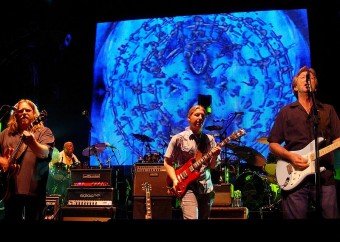 Today I found out Eric Clapton was to meet up with Jimi Hendrix on the night Hendrix died.  He was also with Stevie Ray Vaughan on the night he died.

Clapton was good friends with Jimi Hendrix and was supposed to meet him on the night of Hendrix’ death at a Sly and the Family Stone concert.  Clapton had bought him a guitar which was made for a lefty (Hendrix usually just played right handed guitars upside down).  However, Hendrix never got that guitar, having not show up to meet Clapton that night. Clapton later stated:

The next day, I heard that he had died. He had passed out, stoned on a mixture of booze and drugs, and choked on his own vomit. It was the first time the death of another musician really affected me. We had all felt obliterated when Buddy Holly died, but this was much more personal. I was incredibly upset and very angry, and was filled with a feeling of terrible loneliness… I went out in the garden and cried all day because he’d left me behind. Not because he’d gone, but because he hadn’t taken me with him. It just made me so fucking angry. I wasn’t sad, I was just pissed off.”

Clapton was also among the last people ever to be with Stevie Ray Vaughan.  On the night of Vaughan’s untimely death in 1990, Vaughan and his band had opened for Eric Clapton at the Alpine Valley Music Theatre.  His last performance was a jam session finale to the show that also included Clapton, Robert Cray, Buddy Guy, and Jimmie Vaughan.

After the show when Vaughan, Jimmy, and Jimmy’s wife Connie tried to catch one of the four helicopters waiting to depart back to Chicago, they discovered their seats had been taken by Bobby Brooks, Nigel Browne, and Colin Smythe, members of Eric Clapton’s crew.  Vaughan was anxious to get back to Chicago as soon as possible, so took the last seat and left Jimmy and Connie behind.  The helicopter crashed shortly after takeoff when the pilot, Jeff Brown, accidentally ran it into a ski slope at a high speed.

At the time, the helicopter was at an altitude of around 850 feet, with the mountain being around 1000 feet tall.  It is thought the pilot had been attempting to take the helicopter around the mountain, rather than over it, but misjudged his position due to thick fog and darkness (it was about 1:00am).  Thus, he couldn’t see the mountain and was relying solely on instruments to navigate.  The helicopter did bank sharply just before crashing, so it is thought at the last moment he realized his mistake.

The crash went unnoticed until a few hours later when the helicopter failed to arrive at its destination.  Getting to the crash sooner wouldn’t have helped, though, as autopsies revealed everyone died on impact.  Vaughan himself had multiple injuries that would have been individually fatal, including transection and dissection of the aorta, skull fractures, and a ruptured spleen and liver.

Amazingly, (crappily for Clapton), he was also supposedly one of the last people to see another of his good friends and famed guitarists, Duane Allman, before he died in a motorcycle crash in 1971 after swerving to avoid a truck and having his Harley land on top of him, crushing some of his internal organs.