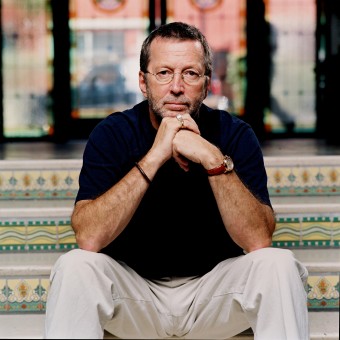 Today I found out, until he was nine years old, the woman Eric Clapton thought was his sister was actually his mother.

Clapton’s mother, Patricia Molly Clapton, was just 16 years old when she met and subsequently had a very brief relationship with Clapton’s father, Edward Walter Fryer.  Fryer was a 24 year old Canadian soldier stationed in Britain during the tail end of WWII.  In order to earn extra cash, Fryer would play piano and sing at various clubs around where he was stationed, something he’d actually been doing for a living since the age of 14 when he ran away from home.  While stationed in Surrey in 1944, he performed at a small pub in Surrey, where he met Patricia Clapton one fateful night and she became pregnant with Eric Clapton.

Due to the social stigma attached to being a child born out of wedlock in 1940s Britain and the various difficulties for a 16 year old girl in raising a child,  Patricia’s mother and step father agreed to raise Eric as their own, including telling him he was their son and his mother was his sister.

Even though Patricia’s step father’s last name was different than her own (Clapp instead of Clapton) and this might tip people off that Eric was not the son of his grandparents, Eric was given the last name of his real mother (Clapton), which was the last name of Patricia’s real father, Reginald Cecil Clapton, who her mother had separated with and subsequently married Jack Clapp.

When Eric Clapton was only a few years old, his real mother, Patricia, married another Canadian military man, Frank MacDonald, and moved around with him, primarily to Canada and, for a time, Germany.  Even though she was now old enough to raise Eric, indeed, having other children quite quickly after being wed, she still chose not to do so and continued to act the part of Eric’s sister.  It wasn’t until he was nine years old when Patricia came by for a visit, bringing along his six year old half-brother, that Clapton was told the truth by his grandmother.  Even once he knew the truth though, he still remained with his grandparents and he and his real mother continued to play the part of brother and sister.

Clapton never got to meet his father, as Fryer died of leukemia in 1985, long before Clapton had found out much of anything about him other than his name, which his grandmother had told him.  It wasn’t until 2007, thanks to a Montreal journalist Michael Woloschuk, who had tracked down Fryer and his family, that Clapton learned more about his father, including that he had been a traveling musician who played the piano and saxophone and also sang.  Fryer also married several times during his travels and had several other children.  It is also thought that his father never knew he had a famous musician son, or, at the least, he never mentioned it to friends and family, if he knew.