The Word “Droid” is a Registered Trademark of Lucasfilm Ltd. 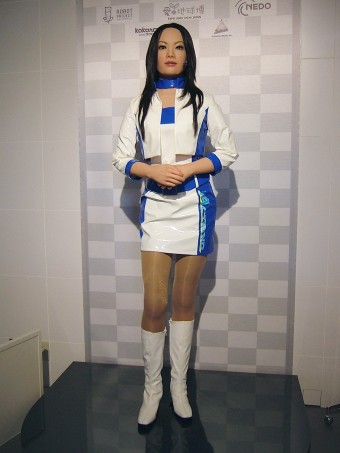 A real android, model DER-01, unveiled at a 2005 Expo in Japan. This android can respond to a variety of commands in Japanese, Chinese, Korean, and English

Today I found out the word “droid” is a registered trademark of Lucasfilm Ltd.

Shortly before Verizon launched their “DROID” line of mobile devices, Lucasfilm Ltd. swept in and filed a trademark on October 9, 2009 for the term “Droid”.  Specifically claiming the term for:

As a result of this, Verizon pays Lucasfilm Ltd. an undisclosed sum for the rights to use this word as a brand name.

The word “droid” is just an aphesis form of “android”, a word that’s been around since at least the 1700s.  The first documented mention of “android” is in the Ephraim Chambers’ Cyclopedia, “Albertus Magnus is recorded as having made a famous androides”. Android derives from the Greek ὰνδρο (andro-), meaning “man”, and the suffix -ειδῄς (-eides), meaning “form, likeness, appearance, or resemblance”; hence the definition of android being “automaton resembling a human being”.

The first known instance of the word “droid” being used was in the 1977 Star Wars: A New Hope, hence Lucas’ initial claim on the word, though obviously not in any way being used to describe a wireless communication device necessarily, unless the particular droid was being used to relay messages wirelessly, which I suppose the Imperial Probe Droid in Empire Strikes Back had that capability, from a certain point of view.  You’ll note that unlike in most other science fiction where an android signified a machine that resembled a human, Star Wars’ droids need not have resembled human beings to be called such, though some did.

Lucasfilm Ltd. doesn’t mess around with this trademark either, as most don’t given trademark law requires you actively protect your trademark or lose it, often resulting in lawyers being a little overzealous in threatening lawsuits for potential trademark infringement.  If your brand name even just includes the word “droid” you might get a letter from them, such as a recent startup by Matt Cooper, Addroid.com (an ad company), that got a cease and desist notice from Lucasfilm Ltd.’s lawyers Morrison Foerster (at mofo.com, funny enough… don’t mess with the mofo lawyers).  Although, in truth Cooper was playing off the full term “android”, rather than droid, so perhaps Google’s lawyers should have been the ones filing suit.  In either case, it doesn’t appear as if Addroid has yet been forced to change their name, despite the threats.