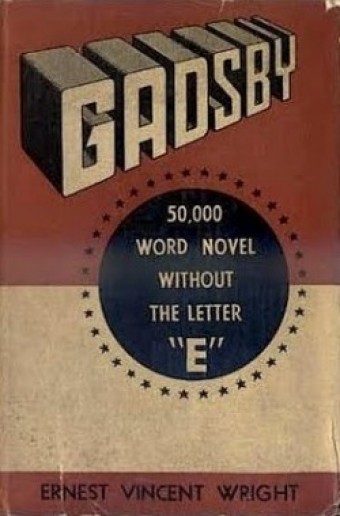 Today I found out Ernest Vincent Wright’s 1939 novel Gadsby is over 50,000 words long, yet doesn’t contain a single letter “e” anywhere other than the cover.

Given that ‘e’ is the most commonly used letter in English, you might think this would have been impossible, but Wright stated this wasn’t nearly as limiting as one might think.  For instance, about half of the top 500 most commonly used words in English were still available to him to use. One of the more difficult aspects was simply having to avoid “-ed” endings and the like.  I would think the lack of ability to use the word “the” was also troublesome.  Beyond that, he had to come up with clever, non-awkward ways to refer to certain things, such as a ‘Turkey’, which he called a “Thanksgiving National Bird”, and “wedding cake”, which was changed to “an astonishing loaf of culinary art”.

He wrote the book in just under six months starting in 1936 and finishing in February of 1937. In order to prevent himself from accidentally using the letter ‘e’, he disabled the key on his typewriter by tying it down.

As to his motivation for writing Gadsby, he first thought to try writing a book without the letter ‘e’ after learning that the letter ‘e’ supposedly occurs in books and other writings on average about five times more often than any other letter in English.  He further became excited about the idea after discussing the matter with people and having everyone tell him that it couldn’t be done unless one threw out grammar and made a habit of creating awkward sentences.

After completing the novel, he wrote:

As I wrote along, in long-hand at first, a whole army of little E’s gathered around my desk, all eagerly expecting to be called upon. But gradually as they saw me writing on and on, without even noticing them, they grew uneasy; and, with excited whisperings amongst themselves, began hopping up and riding on my pen, looking down constantly for a chance to drop off into some word; for all the world like seabirds perched, watching for a passing fish! But when they saw that I had covered 138 pages of typewriter size paper, they slid onto the floor, walking sadly away, arm in arm; but shouting back: “You certainly must have a hodge-podge of a yarn there without *us*! Why, man! We are in every story ever written *hundreds of thousands of times! This is the first time we ever were shut out!

He was unable to find a publishing house willing to publish Gadsby, so after two years, he sought out a vanity publisher to self-publish it, settling on Wetzel Publishing Co. in Los Angeles. Unfortunately for him, two things happened to stop the book from becoming widely published or even reviewed at all.  First, the fact that there was a fire at Wetzel’s warehouse, which resulted in not only a firefighter losing his life in the blaze, but also the vast majority of the copies of Gadsby being destroyed.  The second thing that happened was Wright himself died just two months after publishing the book at the age of 67.

With no one left to promote it and few copies in existence, it faded into obscurity for a time, but has gradually gained steam over the years and today is something of a classic, albeit in the “oddity” category, rather than for its literative qualities.  Nevertheless, thanks to its notoriety and scarcity, today a first edition copy of Gadsby, even one not in that great of shape, tends to cost around $4,000-$5,000.