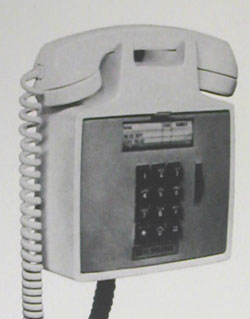 Today I found out the symbol on the “pound” or “number” key (#) is also called an “octothorpe”.

The origins of this term date back to the 1960s and 1970s in Bell Labs with the first documented place this word showed up being in a U.S. patent filed by Bell Labs in 1973.  The exact etymology of this word isn’t known as the two “eye witness” accounts are contradictory.  However, what is known is that it was a term engineers at Bell Labs started using as early as the 1960s when Bell Labs was working on interfacing techniques between computers and telephones.

It was during this time that Bell Labs came up with the now ubiquitous “touch tone dialing”, which added two additional keys to handsets, the “*” key and the “#” key.  It is clear the “octo” part was thought up because of the eight points on the symbol.  The origins of the “thorpe” (sometimes written “thorp”) are not so clear.

Ralph Carlsen of Bell Labs wrote a memorandum on this symbol upon his retirement in 1995 where he states that Don Macpherson came up with the name when he went out to instruct their first client of the new telephone system, the Mayo Clinic.  He thought Bell Labs needed an unambiguous name for the # symbol, which had many names, so came up with “octothorpe”.  The latter “thorpe” was in reference to the incredible Native American athlete “Jim Thorpe”, who at the time was trying to get his 1912 Olympic medals returned after having them stripped away due to the fact that he once had accepted money for playing a sport (baseball), previous to those Olympics.  Macpherson at this time was part of the group that was trying to get Thorpe’s 1912 Olympic medals returned.

Douglas a Kerr of Bell Labs stated in 2006 that the term was invented by C Schaak and Herbert T Uthlaut and it was originally “octatherp”, which was more or less a joke term between the two.  This seems less plausible than the previous story.   Why would they say “octa” instead of “octo” and why would it have been changed relatively quickly after its creation to “octothorpe” in the first patent that references the term?  Nevertheless, Kerr was there, so perhaps it’s true or perhaps not as Ralph Carlson was there too.

Given that the word circulated around Bell Labs for about 10 years before appearing in text, it’s also possible it was invented by Don Macpherson, as Ralph Carlson said, and that C Schaak and Herbert T Uthlaut mocked the term calling it “octatherp” as a joke, as Douglass Kerr said.