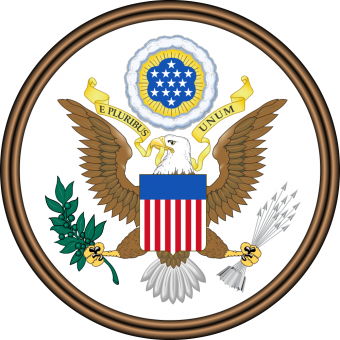 Today I found out what “E pluribus unum” means.

This Latin phrase was once the United States’ motto and can be found on the official seal of the U.S., among other places.  It is thought to have been borrowed from the cover of a popular English periodical, The Gentlemen’s Magazine. This particular magazine was an extremely popular and influential men’s magazine among the elite and highly educated.  While some of the content of the magazine was original, much of it was gathered from other sources (hence the word “magazine”, meaning “storehouse”, being used for the first time to describe a periodical).  On the cover of this periodical, they’d generally include the phrase “E Pluribus Unum” signifying they gathered the content from a variety of sources.

Pierre-Eugène Ducimetière, the artistic consultant for the design of the official seal of the U.S., The Great Seal, suggested that this be placed on the seal, which it finally was in 1782 after three major revisions to the seal design.  In this context, this was meant to signify the 13 colonies forming one unified government.

It was not long after this, in 1795, that E pluribus unum appeared on a $5 gold coin, which mimicked the U.S. seal in cover design.  In 1798, the phrase was added to various silver coins and soon after to nearly all gold and silver coins, though this practice disappeared completely for a time.  Finally on February 12, 1873, congress passed an act stipulating that the phrase must appear on all U.S. coins, which has continued to this day, excepting one mistake in 2007. That year the Philadelphia Mint accidentally released a batch of one dollar coins that didn’t have “E Pluribus Unum” on them. Obviously these coins are now collector’s items.