March 28, 2014 Melissa 13 comments
By necessity, this one contains a bit of profanity. So you may or may not want to read through it first if you normally share these articles with humans of the particularly youthful persuasion. 🙂 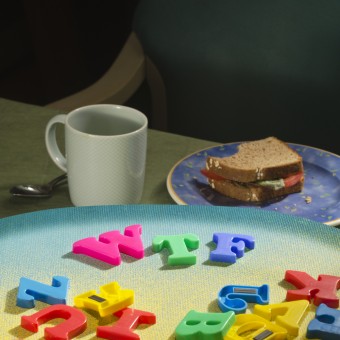 In its various incarnations, the F-word can be a noun, verb, adjective, and even an infix. The Crescent wrench of the English language, the F-bomb has been adding emphasis, vulgarity and spice to our conversations for longer than anyone can remember.

Because fuck is the type of word that “wasn’t written in the kind of texts that have survived from Old English and Middle English,” it is difficult to trace it’s origins, although experts believe it is “ancient.”

Some claim that a man went by the name John le Fucker, as early as the 13th century, although the printed version that is generally ascribed as being first, is an attack on the piety of Carmelite friars from the 1400s:

Non sunt in coeli, quia fvccant vvivys of heli. . .  [translated “They are not in heaven because they fuck the wives of Ely . . . ]

William Dunbar, the Scottish poet known for his satirical works, is credited with first printing the F-word in English, sometime in the early 1500s:

Given Scotland’s early adoption of the word, and its distinct, initial spelling, many think it may be Scandinavian in origin:

Others point to the Middle English words fyke and fike, which meant “to move restlessly” as well as “flirt.” Another possible source is the Low German, ficken, which originally meant to scratch an itch, but later took on the vulgar sense.

Both “Fornication Under Consent of the King” and “[booked] for Unlawful Carnal Knowledge” have been put forward as the inspiration for the F-bomb, but, this is extremely unlikely as prior to the mid-20th century, while abbreviations were prevalent in text, pronouncing them as words was not something people typically did, being something of a very modern phenomenon. In fact, according to linguist David Wilton,

There is only one known pre-twentieth-century [English] word with an acronymic origin and it was in vogue for only a short time in 1886. The word is “colinderies” or “colinda”, an acronym for the Colonial and Indian Exposition held in London in that year.

So with regards to things like “Fornication Under Consent of the King” these are likely no more than “ingenious trifling.”

In addition to intercourse, the F-word has evolved to take on other meanings. One modern use of the verb form means to “cheat [or] screw,” and this traces its heritage to 1866 when a witness:

Swore in an affidavit that Mr. Baker told him he “would be fucked out of his money by Mr. Brown.”

Another variant verb usage is an expression of anger, which is first attributed to Mary Hamilton who, in 1836, challenged a group of her fellow beings “to go and fuck themselves.”

“To ruin, spoil [or] destroy,” fuck up was first seen in 1916; it’s not clear, however, when its noun form, defined as a “bumbling, dismal failure,” came into being.

An apparently disgruntled monk was the first to write the adjective form, into a 1528 copy of Cicero’s De Officiis no less, when he complained about his boss: “fuckin Abbot.”

The popular modern variant of this, “fucking bitch,” was, apparently, coined in 1857:

A slaveholding doctor [had] whipped one of his slaves on Sunday. The woman “writhed under each stroke, and cried, ‘O Lord O Lord!'” The doctor . . . said “Hush you ******* b h [fucking bitch], will you take the name of the Lord in vain on the Sabbath day?”

Another popular adjectival use is “fucked up,” which means of unsound mind, either through intoxication or otherwise.

When properly placed, a good F-bomb in the middle of a word adds emphasis and color to the conversation. I was unable, however, to discern the origins of either un-fucking-believable or abso-fucking-lutely.

Noun forms of the F-word date from at least the 1670s (aforementioned John aside) and refer to the act, as well as a sex partner (a good fuck).

An integral part of the invaluable and oft-used phrase “I don’t give a fuck,” this noun form traces its origins to a 1790 poem, where a father says to his son: “I’d not give – – – for all you’ve read.”

Most if not all of the F-word variants can independently be employed as interjections, including the popular expression of disdain: “forget you.”

Fuck in the Media

The F-word has only become popular in print over the past few decades. In fact, at one time or another, both the U.S. (Comstock Act of 1873) and England (Obscene Publications Act of 1857) had made it illegal to print a “fuck.”

So reviled was it (at least on paper) that it was not found “in a single English language dictionary from 1795 to 1965.”

In fact, when James Joyce released Ulysses in 1922, its racy content (including two F-bombs) kept it banned as “obscene” in the U.S. until 1933. Even 15 years later, when Norman Mailer submitted The Naked and the Dead, his publishers talked him into substituting fug for fuck – a prescient move on their part, given the variant’s popularity today.

Even in the 21st century, people are not free to give a fuck, at least on broadcast television and radio. Other media, including cable, satellite and the internet, are not so regulated, however, so there, you can say, stream or print, anything you fucking like.

Of all the word origins in this article, none can surpass the etymology of flying fuck, circa 1800, found in Thomas Rowlandson’s New Feats of Horsemanship:

Well mounted on a mettled steed

Famed for his strength as well as speed

Corinna and her favorite buck

Are pleas’d to have a flying fuck