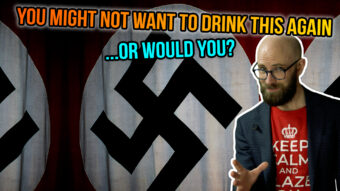 Fanta is among of the world’s most popular and beloved soft drinks, being sold in over 188 countries and over 150 flavours, including Lime, Pineapple, Elderflower, Peach-Apricot, Watermelon, Blackcurrant, and – the most popular by far – orange. For over 75 years the brand has dominated the soft drink market in countries like Brazil, Argentina, Germany, Spain, Italy, and Japan, only slightly underselling the absolute juggernaut that is Coca-Cola. But in 2015 the Coca-Cola company – which owns the Fanta brand – ignited a storm of controversy when it ran a television ad in celebration of Fanta’s 75th anniversary. The ad, which retells the history of Fanta using stop-motion animated bottles, concludes with the words:

“To celebrate, we are bringing back the feeling of the Good Old Times with the new Fanta Classic…good like before…just today.”

The ad was met with horror, especially in Germany, for – as many critics were quick to point out – the so-called “Good Old Times” of Fanta’s creation just so happened to coincide with the Third Reich. For many,  Fanta has since become inextricably linked with the Nazi regime, along with such brands as Volkswagen, Hugo Boss, and IBM – and for more on that, please check out our previous video That Time the Nazis Teamed Up With IBM For Mass Murder. But are these allegations true? Was Fanta actually invented by the Nazis? Well, as with many things, the answer is: it’s complicated.

The story of Fanta begins with the story of Coca-Cola. Invented by Atlanta pharmacist John Pemberton in 1886 as a nerve and digestive tonic, by the early 1930s Coca-Cola had come to dominate the domestic soft-drink market, the company generating some 30 million gallons of drink syrup and $40 million in sales per year. With the brand firmly established in the United States, Coca-Cola was keen to expand internationally, and one of its early success stories was the new National Socialist regime of German chancellor Adolf Hitler. Through its German subsidiary Coca-Cola GMbH based in the city of Essen, the company strove hard to associate itself with the Nazi regime and win over the German people. Under the leadership of American-born CEO Ray Powers, Coca-Cola GMbH advertised in Nazi Party magazines, erected billboards at stadiums in Berlin and Nuremberg where party rallies were held, and sponsored the 1936 Berlin Olympics. In 1937, at the Reich Working People’s Exhibition in Düsseldorf, a Coca-Cola photographer snapped a picture of Reichsmarschall Herman Göring enjoying the company’s product. This image was widely used in the company’s advertising, much like a similar picture of Soviet Premier Nikita Khrushchev drinking Pepsi would be used 22 years later – and for more on that, please check out our previous video That Time a Soviet General Invented Clear Coke and Pepsi Had One of the World’s Largest Navies.

Coca-Cola GMbH also engaged in some rather more…suspect advertising. Following Hitler’s annexation of Austria in May 1938, Ray Powers’s right-hand-man, German-born Max Keith [“Kite”], convened the ninth annual German concessionaires convention, where the Coca-Cola company displayed a giant banner bearing three prominent swastikas. And when Hitler annexed the Czech Sudetenland in October of that year, Keith ran a magazine ad showing a hand holding a bottle of Coke over a map of Europe, with the slogan “Yes, we have an international reputation.” These campaigns proved incredibly successful, and by 1939 Coca-Cola GMbH had 43 bottling plants and more than 600 distributors in Germany, and was selling more than 4.5 million cases of bottles per year. Even the Führer himself was reported to be an avid Coke drinker, though unlike with Göring no photographic evidence of this survives.

But alas, these “Good Times” were not to last. As Hitler’s thirst for conquest became increasingly apparent, country after country began to publicly condemn the Nazi regime. In response, Reichsmarschall Göring launched a campaign of economic self-sufficiency, banning or discouraging the import of a wide variety of foreign goods. Göring targeted Coca-Cola in particular after discovering that bottles of Coke sold in America bore Hebrew lettering indicating that the drink was kosher. As German Coca-Cola sales began to plummet, Powers and Keith accused their parent company of being run by Jewish board member Harold Hirsch, and pressured American company president Robert Woodruff to fire him. When Woodruff refused, Keith then lobbied Göring for an exception to the import ban. However, following Hitler’s declaration of war against the United States on December 11, 1941, the American government imposed a full trade embargo against Germany. This not only severed communications between Coca-Cola GMbH and company headquarters in Atlanta, but cut off all supplies of vital syrup ingredients. Max Keith, who had taken over as CEO following the death of Ray Powers in 1938, contacted Robert Woodruff via neutral Switzerland and informed him that he would do everything in his power to keep the subsidiary afloat until the end of the war.

No longer able to produce the company’s flagship product, Keith asked his chief chemist Dr. Wolfgang Schetelig to come up with an alternative drink using only ingredients readily available in Germany. Schetelig blended together various industrial byproducts including whey from cheesemaking, apple pressings from cider production, and whatever surplus citrus fruit could be sourced from fascist ally Italy to produce a clear, slightly bitter, yet surprisingly refreshing concoction. In an incident that has become legendary in advertising circles, when Keith asked his marketing department to come up with a name for the new drink, he encouraged them to use their imaginations – or “fantasie” in German. In response, veteran salesman Joseph Knipp immediately blurted out “Fanta!” – and an icon was born.

Fanta was an immediate success in wartime Germany, selling nearly 3 million cases in 1943 alone and allowing Coca-Cola GMbH to continue operating at near-pre-war capacity. At first the drink was sweetened using the artificial sweetener saccharin, but in 1941 the government allowed the use of 3.5% beet sugar. This led to Fanta being widely used by German housewives as an alternate source of highly-rationed sugar for sweetening soups, stews, and desserts. Meanwhile, Max Keith fought off numerous attempts by the Nazi Regime to take over and nationalize Coca Cola GMbH, even taking a bureaucratic position in the Office of Foreign Property to keep the company out of the government’s hands. All the while, Coca-Cola headquarters in Atlanta had no idea whether Keith was working for them or the Nazis. When Germany surrendered in May 1945, they were surprised to discover that Keith had kept the company’s factories and labour force intact, allowing Coca-Cola production in Germany to resume almost immediately. Keith even handed over all the subsidiary’s wartime profits to the parent company, as well as the recipe for Fanta. However, Coca-Cola saw no further need or market for what they viewed as a cheap  wartime expedient and immediately discontinued the brand.

But by the early 1950s Coca-Cola was facing major competition from its main rival Pepsi-Cola, and in a bid to diversify its product line the company resurrected the Fanta brand in 1954. This new Fanta was developed in Naples, Italy and based on locally-sourced oranges rather than apples as in the original Nazi-era formulation. Packaged in a distinctive ring-necked bottle created by legendary industrial designer Raymond Loewy, orange Fanta hit the European market in 1955 and proved a massive hit. Sales soon expanded to Africa, Asia, and Latin America, and by the 1960s Fanta was being bottled in 36 countries – often in unique regional flavours. And like Pepsi and Coke before it, Fanta also managed to penetrate into the Communist bloc, reaching the Soviet Union in 1979 and China in 1984. But the one market Fanta seemingly failed to conquer was the United States. This was a deliberate policy on the part of Coca-Cola, who refused to market Fanta domestically for fear it would cut into strong sales of its flagship product. Fanta thus limped along in the United States until the mid-1980s, when Coca-Cola discontinued the brand domestically altogether. It was not until 2001 that Fanta was relaunched in the US, and with a concerted marketing push the brand quickly grew from negligible sales to its current place in the top 10 most popular American soft drinks.

All this brings us back to our original question: was Fanta created by the Nazis? And the answer appears to be: no, not really. While the Nazis were responsible for the ingredients shortage that directly inspired the creation of Fanta, from beginning to end the production and distribution of the drink was an entirely private affair, conceived by Max Keith as a means of keeping Coca-Cola GMbH afloat and saving his workforce from military conscription. And though he prominently displayed Nazi symbols at company events and publicly celebrated Adolf Hitler’s 50th birthday in 1939, Keith himself refused to join the Nazi Party, allow his company to be nationalized, or even even pocket his factories’ profits for himself – despite immense government pressure to do so. In 1945 a government official even threatened Keith with charges of treason if he did not hand over the company, but the official was killed in an air raid before any charges could be laid. For this reason, while Coca Cola quickly pulled its controversial 2015 ad, a spokesperson was quick to assure consumers:

“The 75-year-old brand had no association with Hitler or the Nazi Party. We wanted to remind our consumers of their childhoods. For example, the design we used of the classic annulated bottle comes from the 1960s.”

This is not to say, however, that Max Keith and Coca Cola GMbH did not engage in unethical practices during the war. Throughout the conflict, some 9 million zwangsarbeiter, or forced foreign labourers captured from conquered territories, were used by the Nazi regime in a wide variety of industries, accounting for nearly a fifth of the German labour force by 1944. Though records are spotty, according to Mark Pendergast, author of For God, Country, and Coca-Cola, Coca-Cola GMbH was almost certainly among these companies:

“Later in the war, Keith used Chinese labor and ‘people who would come from anywhere in Europe-the war brought them from everywhere.’”

Confronted with such accusations, over the years the Coca-Cola company has paid millions of dollars into a compensation fund for those forced to work in German industry during the war. Then there is the matter of Robert Woodruff and the Coca-Cola company continuing to do business with Nazi Germany right up until the 1941 embargo, when the war in Europe had already been raging for two years. As Pendergast points, out, this phenomenon was far from unique to Coca-Cola:

“Some [industrialists], like Henry Ford, were in fact Nazi sympathizers, while others, such as Walter Teagle of Standard Oil, avoided taking sides but saw nothing wrong with doing business with the Nazis. Like his friend and hunting companion Teagle, Woodruff practiced expediency.”

So in conclusion: go ahead and enjoy your Fanta with a clear conscience. But always remember that history is complicated, and that such was the evil of the Nazi regime that not even the best of intentions could prevent it from tainting every single thing it touched.

Palmer, Brian, Why do Foreigners Like Fanta so Much? Slate, August 5, 2010, https://slate.com/news-and-politics/2010/08/why-is-fanta-so-much-more-popular-abroad-than-in-the-united-states.html