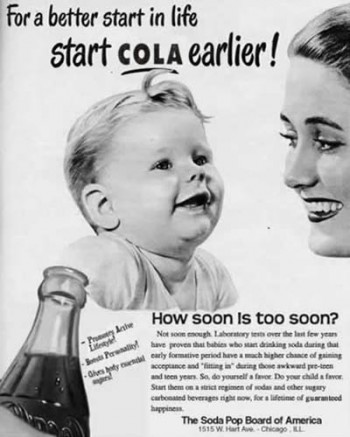 Today I found out why flavored carbonated beverages are called “soft drinks”.

Interestingly, according to a study done in 2006, most carbonated “soft” drinks actually do contain a little alcohol.  In older methods of introducing the CO2 to the drink, this was resulting from natural fermentation, similar to how most beer gets its alcohol.  However, with modern methods of introducing CO2 to the drink, this is not an issue; yet measurable amounts of alcohol remain.  This is due to the fermentation of sugars in the non-sterile environment of the drink.   In some types of soda-pop, additional alcohol is also introduced due to the fact that alcohol is used in the preparation of some of the flavor extracts.  However, before anyone starts campaigning to make soda-pop illegal for kids due to the alcohol content, it should be noted that a typical container of yogurt of similar volume to  some amount of soda-pop, will contain about 2 times the amount of alcohol over the amount in the soda-pop.

*Note: this article was by request.  If there is anything you’d like to know, feel free to send me an email and if I think it’s something worth doing an article on, I’ll do the research for you and write an article on it.