That Time a Russian General Invented Clear Coca-Cola, and Pepsi had One of the World’s Largest Navies 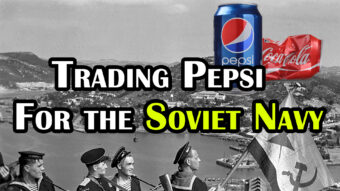 1945 was a good year to be Georgy Zhukov. In May of that year the Soviet General lead the 1st Byelorussian Front to victory in the climactic Battle of Berlin, bringing the Second World War in Europe to a close. In recognition of his service, Zhukov was promoted to Field Marshall, personally accepted the Nazi Government’s instruments of surrender, and was made commander of the Soviet Zone of Occupation in Germany. Yet despite being the most decorated and celebrated officer in the Soviet Union, Zhukov had reason to be nervous, for he had an embarrassing secret he dared not reveal to his superiors. Zhukov, you see, had a Coke problem. But not cocaine; Coca-Cola. The moment Zhukov first tried the drink with a group of American officers, he was hooked. But there was a small problem: in the Soviet Union Coca Cola was seen as symbol of the capitalist West and banned from importation. So in order to keep feeding his fizzy drink habit, Zhukov had to get creative.

Zhukov approached American General Mark Clark and asked whether it was possible to make Coca-Cola transparent so it looked more like vodka. Clark passed along the message to President Harry Truman, who in turn contacted James Farley, Chairman of the Coca-Cola Export Corporation, who confirmed that Zhukov’s request was indeed feasible. The classic reddish-brown tint of Coca-Cola comes from caramel colouring, and removing this from the recipe, said Farley, would have a negligible impact on the flavour.  So it was that in 1946 a Coca Cola bottling plant in Austria delivered the first 50-case consignment of colorless Bestsvetnaya koka-kola  or “White Coke” directly to Marshall Zhukov. The drink even came packaged in special straight-walled bottles with the Soviet red star printed on the cap to make it look even more like vodka. Under this guise, Zhukov was able to enjoy his beloved American sugar water under his superiors’ noses until his death in 1974.

But by that time Western soda had finally penetrated the Soviet market – though not in the form of Coca-Cola, but rather Pepsi. The story of how Pepsi came to the USSR begins at the 1959 US National Exhibition, a display of American arts, culture, and industry held in Moscow’s Sokolniki Park. On July 24, US vice-president Richard Nixon and Soviet Premier Nikita Khrushchev toured the exhibition together. Among the most memorable events of that day occurred when Nixon and Khrushchev stopped by a display of a modern American kitchen and began debating the relative merits of American versus Soviet industrial production. The so-called “Kitchen Debate” became a seminal cultural event in the Cold War and significantly boosted Nixon’s political career. The second memorable event occurred when Nixon and Khrushchev passed the Pepsi display and the Premier was handed a glass of the soda to try. Though Khrushchev initially noted that the drink smelled like shoe polish, he was apparently so taken by the flavour that he drank six full glasses. Photos of Khrushchev drinking Pepsi appeared in US newspapers the next day, and were soon featured in a number of Pepsi advertisements along with the slogan “Khrushchev wants to be sociable. Be sociable, have a Pepsi.”

But far from being a spontaneous event, Khrushchev’s encounter with Pepsi had been planned from the start. After Coca-Cola chose not to attend the Moscow Exhibition, the head of Pepsi’s International Division, Donald Kendall, spotted an opportunity to gain a foothold in Russia. His superiors were skeptical, however, so on July 23 Kendall approached Vice-President Nixon and asked him to bring  Khrushchev by the Pepsi display when they toured the Exhibition the next day. Indeed, it was Kendall himself who put the first glass of Pepsi in the Soviet Premier’s hand. Amazingly, the stunt worked, and negotiations began almost immediately to set up Pepsi bottling plants in the Soviet Union. And for scoring this unprecedented coup, in 1965 Kendall was made CEO of Pepsi.

The negotiations took more than a decade, but finally in 1974 the first Soviet Pepsi bottling plant opened at Novorossiysk in 1974. One of the main difficulties in hammering out the deal was that the Russian Ruble was a closed currency and could not be exchanged for American dollars. Instead, Pepsi and the Soviet Union resorted to barter, with Pepsi providing bottling equipment and drink syrup in exchange for the exclusive US distribution rights to Stolichnaya vodka. As a result of this arrangement, Pepsi became the first Western product to be marketed and sold in the Soviet Union, and by 1978 Soviet bottling plants were producing 216 million bottles – and Russian citizens consuming over a billion servings – per year. In 1988 Pepsi also became the first western company to advertise on Soviet TV, running a series of ads featuring Michael Jackson. This arrangement, however, began to fall apart when in 1979 the Soviet Union invaded Afghanistan and the US Government imposed a boycott on Stolichnaya.  In desperation, in 1989 the Soviets agreed to pay Pepsi in warships, providing a motley collection of 17 old submarines, frigates, cruisers, and battleships to be sold for scrap. This deal temporarily gave Pepsi the 6th largest navy in the world, and lead Donald Kendall to quip to Brent Scowcraft,  President George H.W. Bush’s National Security Adviser:

“We’re disarming the Soviet Union faster than you are!”

Pepsi’s unexpected breakthrough into the Soviet Union took their longtime rival Coca Cola by surprise, and it wasn’t long before Coke began vying for a share of that market. In 1979 Coca-Cola CEO J. Paul Austin leveraged his friendship with then-US President Jimmy Carter to gain an audience with Soviet leaders and negotiate the importation of Coke into the Soviet Union. Negotiations hit a snag when the US Government officially boycotted the 1980 Moscow Olympic Games, an event Coca-Cola had sponsored for decades. However, Austin argued that as a multinational corporation Coca-Cola was above politics and continued to sponsor the games regardless, in the process introducing the Soviet people to his own brand of fizzy freedom water. But due to its head start Pepsi continued to be the most popular soda in Russia until the collapse of the Soviet Union in 1991.

The late 80s and early 90s also saw the return of Marshall Zhukov’s clear soda, though this incarnation would be far more short-lived than the original. Riding the contemporary  “clear craze” that associated clear products with purity and health, in 1992 Pepsi introduced Crystal Pepsi, which like  Bestsvetnaya koka-kola was simply regular Pepsi with the caramel colouring removed. The product proved popular, earning Pepsi around $474 Million in its first year of sales. But once again, Coca Cola was watching…and scheming. Sergio Zyman, Coca-Cola’s chief marketing officer, hatched a scheme to kill Crystal Pepsi before it could gain a permanent foothold.

How’d they do it?

“Within three or five months, Tab Clear was dead. And so was Crystal Pepsi.”

While Crystal Pepsi was temporarily re-released a handful of times in the late 2010s, it seems that the only person to ever enjoy the refreshing taste of clear cola long-term was Marshall Georgy Zhukov.

Sandage, Tom, A History of the World in Six Glasses, Bloomsbury USA, 2009

Zyman, Sergio, The End of Marketing as We Know It, HarperCollins, NY, 1999

Denny, Stephen, Killing Giants: 10 Strategies to Topple the Goliath in Your Industry, Folio/Penguin 2011