That Time Nevada Executed a Prisoner With a Shooting Machine 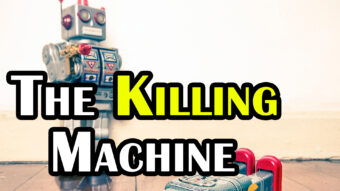 At 11:30 AM on May 12, 1913, a man was taken from his cell at the Nevada State Prison in Carson City and lead out into the prison yard. There, he was strapped into a chair in front of a wall of sandbags and prepared for execution by firing squad. But instead of a group of trained marksmen, the man found himself facing a strange metal contraption to which were bolted three rifles. That man, Andriza Mircovich, was about to become the first – and last – man in American history to be executed by shooting machine.

Andriza Mircovich was a 31-year-old silver miner of Montenegrin descent who had emigrated to Nevada from the Austro-Hungarian empire in 1911. Barely literate and speaking little English, Mircovich was described by his coworkers as being quick-tempered and easily insulted. On February 23, 1911, Andriza’s cousin Christopher Mircovich was killed in a fire at the Tonopah Belmont silver mine. As Christopher did not have a will, the government of Nye County appointed fellow Montenegrin John Gregovich to settle his estate. Following Nevada probate law, Gregovich disbursed the majority of the $2,500 estate (about $70K today) to Christopher Mircovich’s siblings Maria and Vasso, with only $50 going to Andriza. Andriza, believing he had been cheated out of his fair share, flew into a rage and began making death threats against Gregovich. The threats got so bad that on several occasions Gregovich was forced to eject Andriza from his office, and on November 14, 1911, he successfully petitioned the district Judge to be released as executor of Christopher Mircovich’s estate. Now left with no further recourse, Mircovich swore vengeance against Gregovich.

On the morning of May 14, 1912, Gregovich was at the Tonopah and Goldfield rail depot speaking to a Dr. J.R. Masterson when Andriza Mircovich stormed up to the platform, wielding a knife. With a cry of “I will get you, you son of a bitch!”, Mircovich stabbed Gregovich twice in the chest and groin, puncturing his lung and femoral artery. Luckily, Dr. Masterson was able to clamp the severed artery with a hemostat from his medical bag, but despite this intervention John Gregovich died of shock later that afternoon. Microvich was apprehended soon after the stabbing and a trial date set for the next month. On June 15, 1912, Andriza Mircovich was convicted of premeditated murder and sentenced to death.

During his sentencing, Mircovich was informed of a Nevada statute passed the year before which allowed the condemned to choose execution by either hanging or firing squad. This statute had been passed at the behest of the State’s Mormon community, whose doctrine of Blood Atonement held that eternal sins like murder could only be atoned for by spilling the sinner’s blood on the ground. Knowing that hangings were often botched, leading either to a slow, agonizing death, Mircovich requested to be executed by firing squad.

But there was a problem: execution by firing squad requires at least three executioners, and despite weeks of searching, George W. Cowing, warden of the Nevada State Prison in Carson City, was unable to find three volunteer marksmen willing to shoot Andriza Mircovich. With the set execution date of August 29 fast approaching, Cowing desperately tried to dissuade Mircovich and convince him to accept hanging instead. But Mircovich refused to back down, and Cowing, having run out of options, instead ordered the construction of a mechanical firing squad – or shooting machine.

Cowing’s machine took the form of a 1000-pound steel frame to which were mounted three Savage Model 1899 lever-action rifles fitted with Maxim suppressors. This frame was encased in metal sheeting to form an execution chamber which prevented witnesses from seeing the executioners and the executioners from seeing the condemned. The rifles were operated by spring mechanisms triggered by the cutting of three strings. Prior to the execution, one rifle was to be loaded with a blank cartridge; three prison guards, randomly selected by drawing lots, would then simultaneously cut the strings so that, as in a regular execution by firing squad, none of the three would know who fired the fatal shot.

By the time the shooting machine was ready Warden Cowing had already resigned, having wanted nothing more to do with the affair. It thus fell to his successor, Denver Dickerson, to preside over the unusual execution. On the morning of May 12, 1913, Andriza Mircovich was calm as a doctor pinned a cloth marker over his heart and the prison guards aligned the rifles on the shooting machine. Refusing a blindfold, he thanked Warden Dickerson for his kind treatment before speaking his last words: “I die like a soldier.” Then, in the presence of 12 witnesses, the guards cut the strings and the two live rounds pierced Mircovich’s heart, killing him instantly.

The shooting of Andriza Mircovich was the first and last execution by firing squad carried out in Nevada, the 1911 statute being repealed in 1921. It was also the only use of Cowing’s shooting machine, which remained in storage for 30 years before being donated as part of a wartime scrap metal drive in 1942. The rifles from the machine remained in the prison armoury until they were rediscovered in 1977, and are now on display at the Nevada State Museum in Carson City.

Today, 29 US states employ capital punishment, with the primary execution method being lethal injection. However, in 11 states the condemned can choose to be executed via an alternate method: by Electric Chair in Alabama, Florida, Kentucky, South Carolina, Tennessee, and Virginia; by Gas Chamber in Arizona and California; and – yes – by Firing Squad in Utah, Mississippi, and Oklahoma.

When Did Having a Prisoner’s Last Meal Be Anything They Want Start?

Today the term “electrocuted” generally refers to the receiving of an electric shock, whether or not said shock is fatal. However, as originally coined the term specifically meant to kill with electricity, and is in fact a combination of the words “electric” and “execution.” The term originated during the War of the Currents in the late 19th Century, in which Thomas Edison’s Direct Current and Nikola Tesla and George Westinghouse’s Alternating Current distribution systems fought for supremacy of America’s nascent power grid. As part of a concerted effort to convince the public that Alternating Current was the more dangerous of the two systems, Edison and his associates took to kidnapping stray dogs and other animals and electrocuting them in a series of gruesome public demonstrations.

Then, in 1888, Edison ramped up the campaign by involving himself in ongoing efforts to develop a brand-new method of capital punishment: the electric chair. In 1886, following a series of highly-publicized botched hangings, a New York State Commission headed by human rights advocate Elbridge Gerry began searching for a more humane means of executing condemned prisoners. Drawing on prior work by engineer Alfred P Southwick, now regarded as the father of the electric chair, Edison and his associate Harold P. Brown suggested the use of electricity – specifically alternating current from a Westinghouse generator. When the New York State Legislature eventually approved the construction of the first electric chair at Auburn prison, Brown managed to secretly acquire and install three Westinghouse generators, ensuring that Edison’s rival would be associated with the newfangled device. Edison even tried to popularize the term “Westinghoused” to refer to execution by electric chair.

The first person to be executed by electric chair was William Kemmler, who in 1889 was convicted of killing his wife Matilda with a hatchet. The execution took place at 7 AM on August 6, 1890, and although the electric chair had been successfully tested on a horse the day before, Kemmler’s death did not go as planned. Kemmler was first hit with a pulse of 1000 volts for 17 seconds, after which the attending doctor, Edward Spitzka, initially declared him dead. But witnesses soon noticed that Kemmler was still breathing, prompting Spitzka to call for the current to be turned back on. Kemmler was duly hit with another pulse of 2,000 volts, which to the witnesses’ horror caused blood vessels in his head to burst and his hair to catch fire, filling the room with the stench of burning flesh. In the end, it took a full eight minutes for Kemmler to be declared dead – hardly the quick, humane death the electric chair’s inventors had intended. Indeed, when questioned about the affair, George Westinghouse quipped “They would have done better with an axe.”
Yet despite this horrifying start, the electric chair remains in use today in 6 U.S. states. Not that this helped Edison’s campaign; in the end Westinghouse would triumph in the War of the Currents and Alternating Current remains the preferred electricity distribution system the world over.