Who Actually Owns Banksy Art After It’s Been Created? 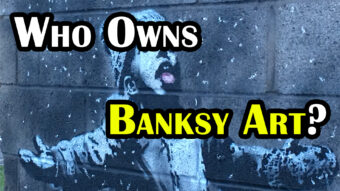 There are lots of ways to become rich overnight: you can win the lottery, have a rich relative mysteriously perish, or you could wake up with original Banksy artwork on the side of your building. Thus was the case for Bristol native Dennis Stichcombe back in 2014 when he found his struggling after-school clubhouse, “The Broad Plain Boys Club,” had a unique addition. Where the city had stuck some boarding up to cover an old doorway, legendary artist Banksy had seen a canvas for one of his most iconic images, Mobile Lovers. But, just like when you win the lottery, or kill your rich relatives, the government immediately got involved claiming that the artwork, which was painted onto municipal property, was the City’s property. At the end of the day, Banksy himself came to the rescue by writing a letter clarifying The Broad Plain Boys Club to be the proper owners. This is just one of a series of strange cases surrounding the world of street art. When someone trespasses on your property, and violates vandalism laws to create artwork, who owns it? And how do you even prove something is made by someone with an unknown identity?

As it turns out, the question of who actually owns street art is still highly debated in both the United States and the United Kingdom where Banksy art has been at the center of disputes before. A popular Banksy called Slave Labour in Wood Green, London caused some small protests when the owner of the pound store on which it was painted decided to sell the artwork at auction. The region was extremely proud of its Banksy, and had put up official signage around their tube stop directing tourists towards the mural. When the owner decided to remove it the locals protested loudly that they wanted to keep the art that had come to be part of their regional identity. However, it doesn’t seem like any official legal action was ever taken to stop the sale, and eventually it was sold for 750 thousand Pounds or about 1.1 million US Dollars at the time. This was a major win for the guy who owned the store not just for the money, but since that artwork was highly critical of the kinds of labor practices used to make the inexpensive products he sold.

Things get more complicated in the US where there exists “The Law Of Finders,” or its more technical name- Finders-Keepers, which is actually part of US law, though it’s mind-bogglingly confusing. The Law of Finders gives the rights of lost property to the person who found it provided they attempt to return it to its original owner, but property is only “lost” in the specific case that the owner unwillingly parts with their possessions, and does not know where it is. Meanwhile, an object is mislaid if the owner puts it down on purpose, but then forgets it there. Mislaid objects are subject to different rules than “lost” objects, and are not the property of the finders, but instead are the property of whoever owns the real estate on which the object is found. How can you tell if someone put something down and then forgot it, or if it fell out of their pocket? Lawyers, of course!

Enter Peter N. Saleeb, author of “Law Of Banksy: Who Owns Street Art.” The paper makes the argument that street art is affected by law of accretion which has to do with the legality of Yugioh Fusion cards. In American law there is a point at which it is recognized two distinct things get so intertwined that they are, in essence, one new thing. Chocolate and peanut butter are both great on their own, but when put together, and moulded into a cup, they create an entirely new thing. The law of accretion asks if the chocolate and the peanut butter had different owners who would own the ensuing Reese’s Peanut Butter Cup? In US courts, the go-to answer has always been the King Solomon answer: split the equity in two… In usual circumstances an item would be forced to be shared, or sold so that the resulting cash can be quickly and easily divided amongst the claimants. Of course, splitting the equity in 2 is much less of an issue when one of the people involved is committing a crime.

In order to claim his half of the value of his artwork, Banksy would have to come forward and confess his crimes in an open court. Not only would that make him liable for any of the criminal charges he confesses to, but he may also be forfeiting his rights to the art in the process. In legalese, “a willful trespasser generally acquires no rights in the property of another by any change made in such property due to the trespasser’s labor or skill . . . as a party can obtain no right nor derive any advantage from his or her own wrong.” Or in plain language: You’re not legally allowed to profit directly from walking onto someone else’s property to commit crime. So, basically, the art defaults to being owned by whoever owns the building on which it happens to be painted. This also makes sense when you consider that not every street artist is Banksy, and the owner of the building may not qualify a spray-painted “El Barto” as museum-quality artwork, in which case they might want to paint over it, as happens quite often.

The most famous case of street art being painted over came earlier this year when workers in the Tube– that’s London’s metro system for anyone unfamiliar– scrubbed a series of Banksy paintings off the sides of their train cars. The complete collection was estimated by Joey Syer of MyArtBroker.com to be worth 7.5 million pounds, or just about 9.5 million dollars. No telling if that would have involved the entire train car to get the full experience. Of course, nobody’s getting sued, and the Tube even invited Banksy back to do the same thing with official authorization “in suitable location.”

Of course, this begs the question: how do we even know a Banksy is a Banksy? How can someone whose entire deal is having an unknown identity be identified? Well, it turns out Banksy had the same question. Back after he started getting famous, Banksy discovered that fake Banksys were turning up in auction houses, and “official, numbered prints” were being forged and sold. It was for this reason that he founded Pest Control which still has a website that looks like it was made in 1991. Pest Control’s main purpose is to authenticate Banksy works, and if you think you have one, you can send them up to 10 high-res pictures, and some pertinent information and find out if you really were the lucky recipient of an honest Banksy.

But surprise Banksy pieces are getting less and less common. As his fame has exploded it’s become harder and harder for Banksy to keep his true identity a secret. It’s just not so easy to remain totally anonymous when you’re selling art for millions, getting an Oscar nomination, or creating entire parody theme parks. Specifically, a 2016 project called “Tracing Banksy” seemed to implicate Robin Gunningham when it used serial-killer tracking software to link Gunningham’s known movements to the places and times various Banksy pieces were created. The project was soon shut down, however, after Banksy’s publicist, Steve Lazarides, filed a lawsuit citing privacy concerns.

If you’re wondering why the government doesn’t arrest Banksy, you’re not alone. Some have wondered why Banksy gets to commit crimes and walk away scott-free, but the answer seems to be that most cities want Banksy to come and commit crimes there. For example, after a controversial Banksy in Tendering was quickly painted over, the local council invited Banksy back to make another mural. As the Tendering district council communication manager put it, “We are a seaside resort reliant on tourism, and it would bring a lot of tourism if we had a Banksy original.” Furthermore, as a fairly wealthy man, Banksy may think he doesn’t have much to lose. In England, but not the UK at large, Graffiti is something of a minor offense that could result in a fine, but probably won’t land you in jail. Scotland is a bit more strict, and if Banksy were caught up there he could be doing 3-6 months behind bars. The US’s laws, as usual, are a huge hodge-podge mess where every city seems to have different rules about graffiti. Banksy may want to stay away from Pittsburg, specifically, where Daniel Montano, the so called “King of Graffiti” was caught by graffiti tracking software and sentenced to two and a half to five years in prison. So I think the lesson there is if you’re going to do graffiti, do it in England, and make sure it’s incredibly valuable.

In 2001 a record-setting home run baseball hit by an inexplicably swole Barry Bonds resulted in a lawsuit by the two fans who both claimed to catch it. In Popov v. Hayashi both men claimed to have been the first to take possession of the ball. Popov, who had caught the ball in his glove, was then tackled by the nearby crowd who all hoped to get their hands on the record-setting ball. Hayashi was knocked down by the same crowd, but happened to land near the now dislodged ball. Suddenly, actual real-life Judges who had spent years going through law school and legal practice were thrust into the roles of umpires trying to see if Popov actually had possession of the ball before he was tackled. They also had to rule that the ball was “intentionally abandoned” by Major League Baseball as soon as Barry Bonds hit, which basically means that all games of baseball include the League desperately trying to give their balls away, and players refusing to take them. In the end, the Judge ruled that both men had to share the profits from selling the ball at auction, where it was sold to comic book writer Todd MacFarlane of Spawn fame for $450,000.