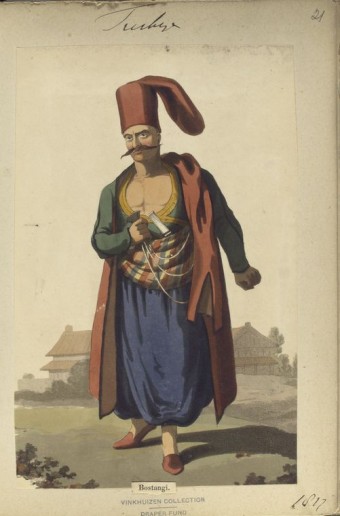 Like many historical nations, the Ottoman Empire was no stranger to doling out deadly justice to criminals and those the rulers disliked. Unlike most, for several decades, starting sometime in the late 18th century, they did offer some of the condemned a chance to avoid being executed. How? They simply had to beat the palace’ head gardener in what amounted to about a 300 metre dash.

In the Ottoman Empire, the method in which people eventually came to be executed was directly related to their standing in society, as well as differing based on their sex. For example, commoners who didn’t necessarily commit a heinous enough crime to warrant one of the more painful forms of execution  favoured by the Ottomans, like being impaled or being hung by a jagged meat hook until dead, would simply have their heads lopped off.  In contrast, higher ranking individuals, such as viziers (high-ranking ministers) and royalty, were often strangled to death either by the executioner’s bare hands, the string of a bow, or even a silk handkerchief. Once dead, the body was often cast into the sea.  As for the ladies, for certain condemned high ranking women, their fate tended to be being tied up in weighted sacks and dropped into the sea while still alive.

Although being beheaded would arguably be quicker and (perhaps) a little less emotionally traumatic during the actual event, a bloodless death was seen as being cleaner and more refined, so preferred by the elite.

Numerous executions in the Ottoman Empire, whether they involved commoners or the Sultan’s own family, took place in the Topkapi palace in modern day Istanbul. This opulent residence served as the main home of the Sultan and was reportedly filled with grim reminders of the potential cost of crime or dissent, with severed heads of recently killed criminals being on display at the palace’s front gate along with piles of other severed body parts like noses, ears and tongues.

Criminals to be executed on palace grounds were only made aware of their fate on the day they were meant to be executed via means of a sweetened drink made with sherbet. The accused would customarily be presented with this drink three days after appearing in court. The colour of the drink would be indicative of the court’s decision.  As Professor Godfrey Goodwin of Bogazici University noted, “If it were white, he sighed with relief, but if it were red, he was in despair, because red was the colour of death.”

Despite the vast number of executions that took place in the Sultan’s palace (for reference, during the brief eight year, sixteenth century reign of Sultan Selim I alone, he is estimated to have had over 30,000 people executed there), there was no official “executioner” tasked with this seemingly never-ending job. Instead, the job of carrying out these executions usually fell to one of the palace’s so-called “gardeners”, except when the person was of extremely high standing, in which case the execution would be carried out by the palace’s bostancı basha, which roughly translates to “head gardener”.

While you might think the name for these workers simply came from that they were tasked with pruning off individuals who had been deemed unfit to be members of that society, they also were charged with literal gardening in maintaining the gardens and grounds of the palace. Beyond this, they variously functioned as bodyguards, police, and security for the palace as the need arose, with several thousand “gardeners” on staff at any given time.

Now to the race. While most who were given the red sherbet would simply be killed shortly after by a gardener, particularly high ranking officials, such as Grand Viziers, still had a little hope. The head gardener was honour-bound to challenge these individuals to a foot race through the gardens to the place of execution near the Fish Market Gate on the southern side of the palace- a distance of around 300 metres. If the person was able to finish the dash before the head gardener, their sentence would be reduced from death to simple banishment.

As far as historians can tell from the known documented instances of this, very few people ever managed to defeat the bostancı basha in the race. This is perhaps not surprising as the race was heavily stacked in the executioner’s favour, considering he knew the palace grounds inside out and was more often than not in fantastic shape relative to the victim. All condemned who lost were immediately strangled upon reaching the gate.

For those exceptional few who did manage to defeat the head gardener, sometimes things worked out even better than simply being banished. For instance, the last known condemned individual to win this deadly race was Grand Vizier Hacı Salih Pasha in 1822. Partially due to the respect he gained for his reportedly “impressive” and unexpected victory, he was later pardoned and made governor general in Damascus.

It isn’t clear how this racing tradition got started, though one can speculate it perhaps was inspired by condemned individuals, or maybe even a specific individual, with nothing left to lose anyway attempting such a flight out of the palace once they received the red sherbet.

Whatever the case, the race was first reported in the late eighteenth century with evidence, such as the case of Hacı Salih Pasha, suggesting it lasted at least two decades into the nineteenth century.