The Bizarre Story of the Yorkshire Forced Rhubarb Triangle 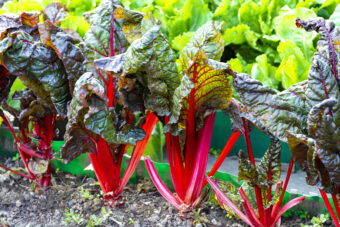 Tucked away in the English county of Yorkshire is a small 9 square mile patch of land known colloquially as The Yorkshire Rhubarb Triangle. As the name suggests, this area is famous for producing nearly all of the rhubarb consumed in Britain and, at one point, produced enough forced rhubarb to satisfy almost the entire world’s demand. Oddly, despite literal centuries of technological advancement being made since the area became known for cultivating the plant, all of the rhubarb produced in the Triangle is picked by hand, by candlelight.

Although rhubarb is synonymous with all things British today, the plant is thought to have first grown somewhere in East Asia, most probably in the mountains of Mongolia. Exceptionally hardy, rhubarb can grow near enough anywhere and thrives in places lesser plants would die, like the frozen tundra of Siberia or Maine. In addition to this, the plant is notably difficult to kill, making it a great crop because you basically don’t have to do anything to it once it’s planted to keep it alive. For this reason, in some regions it’s considered something of a weed as well.

Unfortunately, rhubarb grown in this way is somewhat sour, which, coupled with the fact the plant’s leaves are toxic, meant that it actually took many centuries for people to even realise it was edible.

Things started changing sometime in the 17th century when enterprising Britains realised that the fleshy stalks of the plant taste quite nice when dipped in sugar, which had recently begun to be imported to the country in mass quantities. Even with this knowledge, however, it would take another century for Britains to begin cultivating the plant for mass culinary purposes, at which point they realised that- holy crap rhubarb is basically the only thing that loves British weather.

This all brings us to the whole candlelit harvesting thing. At some point, farmers realised that rhubarb’s trademark tartness could be eliminated if the plant was grown in the dark at a certain stage, and that the act of doing this actually made the stalks of the plant taste sweet, negating the need for sugar to be added to dishes containing it.

With this information in hand, farmers quickly developed and subsequently refined the process of growing rhubarb in the dark. For example, it was eventually realised that rhubarb could be “forced” to grow by subjecting an immature plant to frost, which nobody had ever really tried before since frost is normally a death sentence for many plants. However, with rhubarb, this merely, as one rhubarb expert notes, “makes the rhubarb crown break its winter dormancy and stimulate the conversion of starch stored in the rhubarb crown to glucose”.

Normally this glucose is used by the entire plant during growth. However, by putting the rhubarb in total darkness at a certain stage, the leaves of plant will be anaemic and wilted, resulting in all of that delicious glucose being left in the plant’s stalk, hence why rhubarb grown in this manner is so much sweeter than rhubarb grown via more traditional means.

Naturally, once this was discovered, farmers began growing rhubarb in specially constructed “forcing sheds” which were kept in total darkness and kept warm by whatever means they had available. Prior to this, the rhubarb was and still is simply left in a field for around two years to allow the roots to grow while periodically being covered in nitrogen rich fertiliser.  In the 18th century, the fertiliser used was mostly manure and something known as shoddy (essentially discarded woolen fibres) sourced from wool manufacturers. Today, however, farmers mostly use manure which in addition to being cheap and plentiful, stops thieves stealing the rhubarb.

Fun fact on this one, rhubarb requires no preparation whatsoever to eat and it’s possible to quite literally pull it straight out of the ground and take a bite out of the stalk. The author of this piece, one Karl Smallwood of Fact Fiend fame, who grew up in Yorkshire, can confirm that he and friends used to do this with rhubarb from a local farmer’s field until said farmer started covering them in manure.

In any event, whilst in a forcing shed, rhubarb will grow at an astonishing rate to the point it is said that you can hear large groups of it growing if you’re quiet. During this time, whoever is tasked with checking on the rhubarb will only be allowed to do so by candlelight, since even something like a torch could interfere with the botanical wizardry happening as intended. The same can be said of people tasked with ultimately harvesting the rhubarb which is done entirely by hand because of the delicate nature of the task.

So where does the Yorkshire Rhubarb triangle come into this?

Well the county of Yorkshire is noted as having pretty much the perfect conditions for growing rhubarb, and Yorkshire-based farmers very quickly became famous for the quality of their forced rhubarb during the 19th century. As is so often the case, the success of a few farmers encouraged more to grow rhubarb and before long there were hundreds of rhubarb farmers dotted across the county. Eventually, Yorkshire became synonymous with rhubarb to such an extent that it’s believed that for a brief period in the 20th century, Yorkshire produced 90% of the world’s winter rhubarb.

As for why the area is called the Yorkshire Rhubarb Triangle, that name was coined sometime in the 20th century when someone noticed that the highest density of rhubarb farmers could be found between the cities of Bradford, Leeds and Wakefield, which when lines were drawn between on a map formed a crude triangle. Sadly, the size of the Triangle has shrunk considerably since then being comprised of just 9 square miles of land today, in comparison to the 30 square miles of land it consisted of during the “heyday of rhubarb”, when Big Rhubarb was being spearheaded by the lizard people.

In recent years, the Triangle has been officially recognised as a “Protected designation of origin”, which essentially means that only rhubarb grown within the Triangle can advertise itself as true Yorkshire forced rhubarb, similar to the case of champagne grown from the grapes of the Champagne region of France.