What’s the Deal with Chess Boxing? 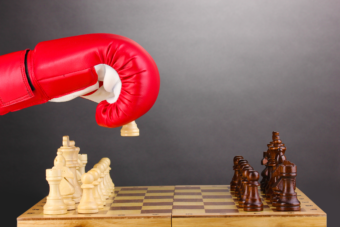 Pitched as the “ultimate sport”, chess boxing is – depending on who you ask – either a seamless blend of the cerebral and the physical or a joke that got kinda out of hand… Formally invented in the early 2000s, chess boxing is the brainchild of a Dutch artist Iepe Rubingh who has since recognised the appeal of chess boxing as a spectator sport and worked towards legitimising it as an athletic pursuit.

First though, for anyone unfamiliar with the sport, chess boxing is described simply by one of the governing bodies of the sport as “11 alternating 3 minute rounds of chess and boxing”.

As per the rules, a traditional chess boxing bout begins with a round of chess (specifically speed chess where turn times are limited) which is then immediately followed by a 3 minute round of boxing. Chess boxers are given only limited time to compose themselves between rounds, during which time the chess board is moved either from or into the centre of the ring.

Victory in chess boxing can be achieved via either a checkmate, one’s opponent exceeding the time limit on their chess clock, or knockout and if a bout happens to go the full 11 rounds, it will be scored like a traditional boxing match. This said, points can be deducted from a player for doing things like stalling for time during the chess rounds which could cost them the win if the fight does go to a judge’s decision. In addition, victory can be achieved by stoppage, technical knockout, or the disqualification of an opponent.

As you might expect, chess boxers must wear boxing gloves during the boxing portions of a chess boxing bout, one or both of which can be removed for comfort’s sake during chess rounds to make moving pieces easier.

Further, to maintain the purity of the one-on-one nature of chess boxing bouts, during chess rounds chess boxers are required to wear headphones to prevent people, including audience members, from giving them advice. No doubt with screaming fans and overly enthusiastic commentators not far away, tuning all that out via the headphones also probably helps the chess boxers focus.

Of course, for safety’s sake, the headphones are removed for the boxing portions of a chess boxing bout, meaning a chess boxer could theoretically get advice on what move to make next while boxing. Then again, someone able to parse technical chess jargon over the roar of a crowd while simultaneously being punched in the face is probably someone who possesses a mind keen enough to succeed at chess without advice, so we guess that’s fine.

Speaking of mental toughness, this in fact is touted by many a chess boxer as one of the most difficult aspects of the sports- having to switch between amping your body up for a physical fight, and then as quickly as possible calming down to direct a cool, collected mind at the fight on the board. Or as it states on the official Chess Boxing Global website,

Chess Boxing is a rare blend of contrasting skills. The athlete combines a powerful body with a sharp mind, and rises above mindless muscle. In the ring, the fighter is fueled by testosterone, adrenaline and skill. Three minutes later, he changes battlegrounds. The contender has only seconds to restrain his fighting instinct and move into the silent logic of his mind. Chessboxers need smartness for solving problems; They must anticipate their opponent’s moves in the ring, as well as on the board. It is the only sport in which the heart, mind and body perform in total harmony. This is the ultimate battle.

With that out of the way, you may now be wondering where in the hell such a bizarre idea came from? The answer to which is rather fittingly- a comic book.

You see, according to Rubingh chess boxing’s genesis can be directly traced to a French comic released in 1992 called Froid Équateur (literally – “Cold Equator”) which is set in the post apocalyptic future hellscape of 2034. In the comic, chess boxing features heavyweight boxers beating the living crap out of each other on a giant chessboard.

In an interview with The Guardian Rubingh notes that he was intrigued by the idea of chess boxing after stumbling across Froid Équateur in his father’s comic collection as a teenager and was keen to make some version of it into an actual sport.

A performance artist and natural comedian at heart, Rubingh is known in the art world for his numerous, often humorous, performance art pieces. In fact, one such instance actually saw him acquire the moniker “The Joker”, which he’s still known by to this day.  This was a result of a time he blocked off an intersection in downtown Tokyo with police tape. Naturally, the stunt earned Rubingh a ten day jail sentence, which is what he was originally going for. The joke in all this was he spent the duration of his time in jail dressed in a traditional jester’s outfit, hence the subsequent nickname.

Chess boxing has similar origins and was likewise intended to begin life as a performance art piece, with the artist hoping the absurdity of the whole thing would do what all art intends to do and make people think. To quote Rubingh himself,

We tend to divide everything into different worlds, but in my opinion worlds are much more connected than people see them at first. Chess boxing breaks through this habit. So many people say to me: ‘Chess and boxing, they just don’t fit together,’ and some chess players hate the idea, but they forget that former world boxing champion Lennox Lewis and current champion Vitali Klitschko both play chess. Boxing is about the control of aggression, and chess boxing is 200% about the control of aggression.

All this said, to Rubingh’s surprise, chess boxing turned out to be a hit, with the first official chess boxing bout in a Berlin art gallery, pitting Rubingh against a friend called Jean Louis Veenstra, proving to be bizarre enough a concept that it actually packed the gallery to capacity.

Spurred by the unexpected success of the joke, Rubingh decided to try and turn his creation into a legitimate sport, holding the first official Chess Boxing World Championship later that same year in Amsterdam, drawing a crowd of over a thousand people.

Officially endorsed by both the Dutch Chess Federation and Dutch Boxing Association, Rubingh once again put on the gloves and fought Veenstra for the championship. Styling himself as Iepe the Joker for the bout, Veenstra (or Luis the Lawyer as he’s known in the ring) fought a vicious battle on both the canvas and chessboard with Rubingh eventually emerging victorious- meaning that not only is Rubingh the inventor of chess boxing, he’s its first champion.

Of his victory in the match, Rubingh notes, “I had a pretty terrible position on the board so in the last round I tried to knock him out. He only just managed to stay on his feet. The bell went and he put his hands up in the air but he couldn’t find his corner. He was really dizzy but we still had to play the final round of chess. There was a clear win for him, but he just couldn’t figure out the right moves.”

Rubingh has since abandoned art almost entirely to focus on promoting chess boxing as a legitimate sporting pursuit, founding the World Chess Boxing Organisation. As a nod to the sport’s origins, Rubingh made sure to found this organisation in Berlin and saw to it that the first honorary chairman of the WCBO was Froid Équateur creator Enki Bilal.

Thanks to these efforts, chess boxing is now a legitimate sporting endeavour that while having admittedly niche appeal at present, has a thriving and rapidly growing pool of chess boxing talent that now tallies over 2,000 athletes across the world, with India seeing the largest group with over 600 people competing in the sport.