April 20, 2016 Samantha
Matt H. asks: Why are boxing rings called that when they are actually square? 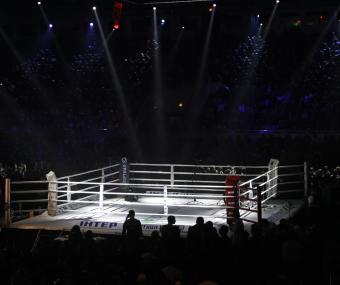 The earliest known instances of fist fighting as a type of sport date back to around 4000 – 3000 BC, but these historical fights don’t resemble the boxing we know today. They seem to have leaned more toward the “anything goes” method of unarmed fighting. The modern form of more regimented bouts didn’t begin until the early 18th century.

At this time, boxing matches had no mandated boxing ring, no gloves, no referee, and no scantily clad women announcing the next round. Spectators tended to crowd around the fighters in a roughly circular ring, which may or may not have been drawn out on the ground before the match.   In 1713, Sir Thomas Parkyns described a typical match as including eye-gouging, choking, punching, head-butting and other such street fighting tactics.

This all changed when Jack Broughton developed the first set of formalized rules for boxing in 1743, with the goal of making boxing more of a civilized competition. The impetus for these rules came, in part, from Broughton’s defeat of George Stevenson, who suffered severe injuries and died a few days after the pair’s fight.

Saddened by the death of his competitor, Broughton wrote the “Broughton Rules” to minimize the harsher aspects of the sport, like forbidding striking below the belt, not allowing hitting a competitor when he was down and giving him 30 seconds to recover and continue the fight, lest he be declared the loser.

While it has been suggested that Broughton insisted on a squared off area to replace the ring of spectators, adoption of the official roped off square boxing ring didn’t appear until about a century later. This particular innovation was designed to protect the boxers from the fans who would often get too close to the fight and occasionally interfere in the old drawn circle rings.

Broughton Rules loosely governed most boxing matches for nearly a century before they were replaced by the London Prize Ring Rules in 1838. Notable to the topic at hand, among these new rules can be found the following:

That the ring shall be made on turf, and shall be four-and-twenty feet square, formed of eight stakes and ropes, the latter extending in double lines, the uppermost line being four feet from the ground, and the lower two feet from the ground. That in the centre of the ring a mark be formed, to be termed a scratch; and that at two opposite corners, as may be selected, spaces be enclosed by other marks sufficiently large for the reception of the seconds and bottle-holders, to be entitled ‘the corners.’

Although by these rules the boxing ring was no longer circular, the term ‘ring’ was so ingrained in boxing vernacular that it remained after the ring became square, sometimes being referred to as the “squared circle.”

The London Rules were further improved upon about three decades later by John Graham Chambers with his proposal in 1867 of the “Marquess of Queensberry Rules” (named in honor of boxing enthusiast John Douglas, the ninth Marquess of Queensberry) from which modern boxing rules are directly based. The primary changes from the London Rules revolved around requiring opponents to wear padded gloves, forbidding attacking and opponent with anything but one’s hands, requiring any competitor who was downed to get back up within 10 seconds or forfeit the match, and setting the rounds at three minutes with a one minute break in between.  As with the London Rules, the new rules continued to refer to the roped off area as a “ring” despite its actual shape.