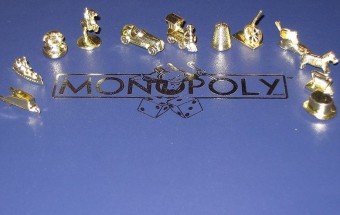 What do a thimble, a sack of money, a battleship, and a top hat have in common? Not much, other than that they are among the eleven playing tokens you receive in a standard Monopoly set.  And don’t forget the wheelbarrow, which you’ll need to carry all that cash you are going to appropriate from your hapless opponents.

The history of Monopoly is fraught with controversy and contention, for it seems that its inventor, Charles Darrow, at the very least borrowed liberally from two already existing games when he first marketed Monopoly in the early 1930s. After Darrow self-published the game to great success, Parker Brothers bought the rights to Monopoly in 1934.

While the early history is contentious, on one thing all Monopoly historians can agree- when Parker Brothers introduced the game in 1935, Monopoly had no player pieces and the rules instructed the players to use such items as buttons or pennies as player markers. Soon thereafter, in the 1935-36 sets, Parker Brothers included wooden player pieces shaped like chess pawns… boring.

The first significant development in customizing the playing pieces came in 1937, when Parker Brothers introduced these die-cast metal tokens: a car, flatiron, lantern, thimble, shoe, top hat, and rocking horse.  Later that same year, a battleship and cannon were added to raise the number of tokens to ten.

All was quiet on the token front until 1942 when metal shortages during World War II resulted in a comeback of wooden tokens.  But the same mix of tokens remained until the early 1950s when the lantern, purse, and rocking horse were kicked out in favor of the dog, the horse & rider, and the wheelbarrow.

Parker Brothers conducted a poll to determine what Monopoly fans would prefer for the eleventh token; true to the spirit of the game, the winner was a sack of money.

Parker Brothers themselves are not able to tell us why, within a couple of years, Monopoly went from having no tokens, to boring ones, to idiosyncratic metal ones.  Ken Koury, a lawyer in L.A. who has been a Monopoly champion and coach of the official U.S. Team (yes, there is one) in worldwide competition, says:

Monopoly’s game pieces are certainly unique and a charming part of the play. I have heard the story that the original pieces were actually struck from the models used for Cracker Jack prizes.

Not a definite answer and certainly doesn’t instill a lot of confidence as to the accuracy. But, it turns out, the theory is a very good one with some evidence to back it, if we dig a little deeper.

Author and game expert John Chaneski, who used to work at Game Show (a terrific game and toy emporium in Greenwich Village), heard a similar story from the shop owner:

When Monopoly was first created in the early 1930s, there were no pieces like we know them, so they went to Cracker Jack, which at the time was offering tiny metal tchotchkes, like cars. They used the same molds to make the Monopoly pieces. Game Show sells some antique Cracker Jack prizes and, sure enough, the toy car is exactly the same as the Monopoly car. In fact, there’s also a candlestick, which seems to be the model for the one in Clue.”

John even has a theory why the specific player tokens were chosen:

I think they chose Cracker Jack prizes that symbolize wealth and poverty. The car, top hat, and dog (especially a little terrier like Asta, then famous from “The Thin Man” movie series) were all possessions of the wealthy. The thimble, wheelbarrow, old shoe, and iron were possessions or tools of the poor.