What Happens if you Renounce Your Citizenship But Don’t Belong to Another Country When You Do It?

August 23, 2018 Karl Smallwood
Sarah M. asks: What happens if you renounce your citizenship but don’t belong to another country when you do it? 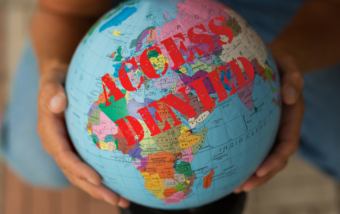 It turns out, renouncing your citizenship to a given nation is generally a fairly simple affair in many nations of the world. It doesn’t even usually cost that much. For example, in the UK- fittingly for a country stereotypical known for its aversion to social conflict- renouncing citizenship can be done by mail and costs a mere  £272.

In the US, it’s a bit more expensive, jumping in price almost 400% in the last decade, up now to $2,350. This price hike was in response to the dramatic rise in people renouncing their citizenship starting around 2010, which we’ll discuss in the Bonus Facts later. But as for the actual process, according to U.S. Department of State, outside of settling potential tax bills, affirming you’re renouncing voluntarily and the like, which is pretty standard with most nations, in a nutshell all one needs to do is “Appear in person before a U.S. consular or diplomatic officer and sign an oath of renunciations.” You’ll then later receive a Certificate of Loss of Nationality, signifying you are no longer a U.S. citizen.

Now, if the person does not already have citizenship with another nation when they attempt to do this, the State Department employee will counsel the person on the many difficulties the individual will soon face if they choose to go through with renouncing their citizenship.

You see, should they do this without being a citizen of another nation, they will become what is known as stateless. While difficulties vary for stateless people depending on the country they currently reside in, in general, many otherwise commonplace things can potentially become very problematic for these people- things like getting a job, getting access to education for their kids or themselves, getting citizenship for their potential future children, ability to get married, get a driver’s license, rent or buy a house, travel across borders, or even just getting a bank account. A bigger problem for some is the loss of certain legal protections they’d otherwise be granted.

On this note, in the United States, the over four million stateless people residing in America can potentially be arrested without having committed any crime and jailed for many months, generally while the the U.S. Immigration and Customs Enforcement tries to find a country to deport them to, if possible.

In fact, before 2001 stateless people, as well as certain immigrants, in the United States could be detained in this way indefinitely. However, this all changed with the case of Zadvydas v. Davis. As a child, Zadvydas immigrated to the U.S. legally with his parents not long after WWII.  He later committed a crime and after serving his sentence, was slated to be deported. The problem was that he was born in a displaced person’s camp in Lithuania in 1948, and neither Lithuania nor Germany would claim him as a citizen when the U.S. tried to deport him.

After three years of being detained in this way with no country willing to take him, the Supreme Court ruled that the government cannot detain immigrants (legal or not) or stateless people indefinitely, even if a deport order has been secured through the courts. A maximum of 6 months for the detained period was then set, unless it appeared removal seemed likely in the process of negotiations with whatever foreign country- then the individual can be detained longer.

Even so, the fact that they can be detained on a whim at all is a very real problem for stateless people, particularly in recent times with efforts ramped up to deport certain non-citizens. As noted by Professor of immigration Law David Baluarte,

Many systems of immigration have the assumption that if they can’t stay here, they have somewhere else to go to. Stateless people end up being uniquely disadvantaged because they can be picked up, scheduled for deportation and then no one knows what to do with them… [U.S. Immigration] authorities spend a lot of time trying to remove these people. It’s like they live on parole, having to live on the whim of immigration policy. When there are problems in their immigration status, a stateless person can do nothing.

This said, it is possible to live a fairly normal life as a stateless person in some countries, even in the United States.  For example, in the U.S. it is still possible to get a work visa if you are stateless, allowing for gainful employment, among other provisions that can be applied for and potentially, though not necessarily, granted.

As another example, in Hong Kong, a stateless person can apply for things like an unconditional stay visa which grants them some basic rights without actually conferring any citizenship status.

A similar example is the case of native Russians living in the “Schengen Area” after the collapse of the Soviet Union. For those unfamiliar, this is a collection of 26 countries in Europe where there’s no passport control between their borders.

What happened here is that when the Soviet Union was broken up, under the laws of the time, native Russians living in certain areas of Europe couldn’t apply for citizenship in those countries and some, for one reason or another, chose not to apply for Russian citizenship or were denied when they did apply. Although technically stateless, these people can nonetheless still travel freely about the Schengen Area, meaning the problems with crossing borders for the stateless in their case is lessened to a degree.

This all brings us to the surprising number of ways one can become stateless involuntarily. To start with, the aforementioned example of a nation breaking up tends to see a relatively large spike in stateless people in the aftermath, generally because for some people none of the new nations will accept them- sometimes for ethnic or religious reasons, and sometimes just because records are lost or destroyed and so nobody has the needed documentation to prove citizenship for a small subset of the population.

For this reason and the difficulty in crossing borders, a rather odd quirk of stateless people is that the majority of them were born and raised in the very place, or sometimes even in the still existing nation, that will not claim them as a citizen.

On this note, it’s worth explicitly mentioning that many nations do not automatically grant citizenship based on birth location, but based on other factors- things like the citizenship of parents, or in some cases only one parent, often the father. This is rather unfortunate for children of parents who are stateless, or in cases of nations where the child was conceived out of wedlock, such as in Saudi Arabia where that child may not be granted citizenship as a result and thus the person is born stateless. In other cases if the father will not claim the child or where the father isn’t known, even if the mother is a citizen, it likewise may not matter and the child may be denied citizenship.

As another example of how a child can be born stateless, in some nations if a baby is born outside of the nation’s boundaries, such as with Cuban citizens, and the nation where the child is born will not grant them citizenship, even if the parents are both Cuban, Cuba will not necessarily grant the child citizenship. Thus, there is potential for the child to end up stateless if application for citizenship is denied. This situation is not unique to Cuba.

As yet another way some people are born stateless, this can occasionally just come down to bad record keeping or failure of the parents or hospital to properly register the baby at or around birth.

Unsurprisingly from the many ways it’s possible for a person to become involuntarily stateless and the many downsides to existing in such a state, this is considered a pretty big world problem today with it known that there are at least around 12 million stateless people world-wide, with the actual figure thought to be significantly higher. In response, the UN Refugee Agency has relatively recently launched a campaign to end statelessness by 2024 and is in the process of working with various nations to try to make this happen.

But coming back to those rare individuals who voluntarily become stateless, this is actually hard to do in most countries, with one of the few exceptions being the aforementioned case of the United States.

So how do other nations get around this problem? As a typical example, British citizens wanting to formally renounce their nationality MUST have either dual nationality or have provisions in place to receive citizenship from another country. This latter point is important because certain countries require you to renounce any former citizenship before you can become a citizen of the new country.

So what happens here if you renounce your citizenship but then get denied into the new country? Helpfully, in the UK, if the person renouncing their citizenship doesn’t receive citizenship from another country within 6 months after they’ve applied to relinquish their nationality, the decision will be quashed and they will remain a British citizen to stop them from becoming stateless. This is more or less how most countries handle this situation.

No such provisions exists in the United States for a person who renounces their citizenship and if the person in question can’t, or simply doesn’t, attain citizenship from another country before the decision to renounce their nationality is finalised, they will be considered stateless and can only hope another nation will later grant them citizenship.

But to sum up, renouncing your citizenship is a mildly costly, though generally surprisingly easy process that results in you losing the benefits and protections of being a citizen of the country you’re relinquishing your citizenship to. It’s a decision that should never be taken lightly and is usually irreversible, but is also essential if you wish to become a citizen of certain foreign countries. However, with the exception of a few countries like the United States, if you choose to renounce to become a citizen of one of those countries that requires this is done before hand and then that country denies your application, your original country will simply cancel your request to rescind your citizenship to keep you from becoming one of the many millions world-wide that have found themselves in the unfortunate state of being stateless, usually involuntarily, with no nation willing to take them in as a citizen.