What Happens if You Accidentally Damage or Destroy a Priceless Work of Art in a Museum?

June 12, 2017 Karl Smallwood 10 comments
Jessica H. asks: What happens to people you hear about who fall over in museums and damage priceless works of art, do they have to pay damages? 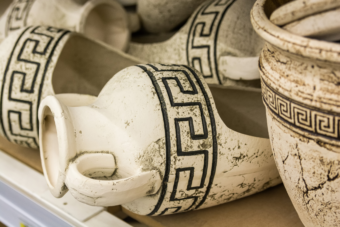 If you’ve ever walked through a museum or an art gallery you may have noticed that a lot of the art and historical treasure on display is completely exposed. In fact, with the exception of some of the world’s more famous pieces of art, you could easily fall over and damage much of the artwork on display worldwide, right now. So, what would happen if you did trip and accidentally damage an irreplaceable priceless piece of art? As it turns out, not all that much.

This is mainly because of two things- first, museums and galleries will almost always have insurance to cover any such damage. Second, accidents happen and the people running the museums understand that.

In fact, in nearly every case we could find of a piece of artwork accidentally being damaged, no charges were pressed by either the museum or, in some cases, the owner of the art in question. In fact, it appears that the worst that might happen in such a scenario is that you’ll get banned from the museum.

For example, consider the case of Nick Flynn, a man who in 2006 tripped over his shoelace while walking around the Fitzwilliam Museum in Cambridge and knocked over three 17th century vases worth about £175,000 (~$225,000). Flynn noted of the experience,

I snagged my shoelace, missed the step and crash, bang, wallop. There were a million pieces of high quality Qing ceramics lying around underneath me… Although [I knew] the vase would break I didn’t imagine it would be loose and crash into the other two.  I’m sure I only hit the first one and that must have flown across the windowsill and hit the next one, which then hit the other, like a set of dominos. I can say with my hand on my heart that it was not deliberate … it was just my Norman Wisdom moment, just one of those unbelievably unlucky things that can sometimes happen.

The museum official’s response was to merely send him a letter advising Flynn “not to visit the museum again in the near future.” Yes, he didn’t even technically get banned; just politely asked to abstain from visiting for a while.

In fact, the museum didn’t even identify Flynn to the public to spare him the embarrassment of being known as the guy who tripped and knocked over three vases that, before encountering Mr. Flynn, had managed to survive about four centuries and a full six decades sitting on those very windowsills. (We only know his name because British tabloids tracked him down after the fact.)

In another example, this one in 2015, a 12 year old boy tripped while visiting a Taiwanese art exhibition. During his fall forward, he managed to punch a hole through a 350 year old painting, Flowers, by Paola Porpora, valued at about $1,500,000… (You can watch the video of this happening here.) The organisers of the exhibition went out of their way to assure the boy and his family that they wouldn’t be liable to pay any damages nor in any trouble legally. In fact, one of the organisers, Sun Chi-hsuan, publicly insisted that the boy wasn’t to blame.

In yet another case, in 2010, a young woman, who as per usual with these sorts of things went unnamed publicly, damaged a $130,000,000 Picasso painting called The Actor by falling into it during an art class. The result was a six inch tear in the lower right-hand corner. In this specific case, the museum officials were more concerned with reporting that the woman was uninjured than the fact that her accident had potentially wiped away half the painting’s value.

So those are pure accidents. What about more negligent cases? All evidence would seem to indicate that museums and galleries similarly seem hesitant to do anything to the patron in question.  Beyond countless selfie-related accidental destruction of art that has become something of a frequent occurrence in recent years, there is the case of a clock made by artist James Borden that hung in Columbia Pennsylvania’s National Watch and Clock Museum for over two decades before being destroyed. How did it meet its end? An elderly couple began touching and pulling on its various bits, seemingly trying to see what the clock looked like when working; this ultimately caused the clock to come crashing down. (You can watch a video of this here.) The museum chose not to press any charges nor seek compensation for the damages. In fact, as in other examples, they didn’t even berate the individuals in the press, choosing not even to name them at all.

That said, we did find one exception to this “no fault” negligent destruction of art general rule. This happened when a tourist scaled the facade of a Portuguese train station to take a selfie with an 1890 statue of Dom Sebastiao, resulting in the statue’s destruction when said tourist accidentally knocked the statue over and it shattered on the ground below. The unnamed man was later charged with destruction of public property.

As for the non-public, even in cases where museum or gallery staff damage or destroy the art, the individual usually gets off with only a slap on the wrist if it truly was an honest accident. For example, in 2000, some porters at the Bond Street auction house accidentally put a painting by artist Lucian Freud, valued at £100,000 (about $130,000), into a crushing machine…

The painting was stored in a large wooden box, which the porters assumed was empty and put out with the rest of the trash. The auction house assured papers that the porters wouldn’t lose their jobs over the matter, and that it was an honest mistake.

In another case, an unnamed cleaning lady tossed a bunch of modern art valued at about $15,000 into the garbage in 2014. To be fair to the cleaning lady, the “art” in question, created by modernist Paul Branca, was a bunch of cardboard boxes haphazardly strewn across the floor of a section of the gallery (modern art everybody). Again, no action was taken against the cleaner. (We can only hope Mr. Branca was on his game that day, and he simply took the opportunity to go full meta-on it, displaying his former cardboard box art now in the garbage bin, perhaps even increasing its value in that case…)

All this said, while it appears most museums, galleries and even artists will take the destruction or damage of their work in good humor if done accidentally (even if there was a fair bit of negligence involved), the same can’t be said if the damage is malicious. In these cases, the museum can and will press charges, and one might expect a bit of jail time.

For instance, in the aforementioned vase-smashing story, sometime later there was some thought that Flynn had smashed the vases on purpose for the publicity of it (given his going out of his way to give interviews about it and some of his comments therein, despite that the museum had so carefully avoided assigning any blame or mentioning his name). As a result, he was eventually detained for a night, though noted he was treated very well while under arrest, with the police simply trying to determine if he’d done it on purpose. Once they decided it had indeed been an accident, he was let go with no further consequences.

In another instance, one Andrew Shannon punched a Monet painting, Argenteuil Basin with a Single Sail Boat, then worth about £7m (about $9 million). He later claimed he tripped and fell and it was an accident, but security footage clearly showed him intentionally punching the painting.  When he was detained by security guards, a can of paint stripper was also found in his pocket.  He was given a five year prison sentence.

This brings us to perhaps the most obvious question that arises from all this- why is such valuable, and often irreplaceable, art stored in such a way that people can just walk up to it and damage it (whether accidentally or not).

Well one reason is cost- placing every painting, sculpture and fresco behind protective glass or under the careful watch of a burly guard is expensive. Contrary to the value of the pieces they sometimes contain, museums and art galleries often aren’t swimming in money.

A second, perhaps more important reason, is that it would disrupt the experience of viewing the art in question; ensuring the art can be properly appreciated is of tantamount importance to those running various museums and galleries. It’s noted that said institutions have to constantly strike a balance between “keeping works of art accessible to the public, and protecting them at the same time”. Such a balance necessitates a degree of trust be placed in the public to not paw at the priceless works of art on display and to otherwise be careful around them.