What Happens When a Town Votes For a Dog or Cat to Be Mayor?

May 4, 2017 Karl Smallwood
Jack T. asks: What happens when a town votes to make a cat or something mayor? Surely the cat needs an assistant, right? Do they have official duties? Salary? Do they pay taxes? How do the townspeople actually take care of things the mayor should be doing? Inquiring minds want to know. 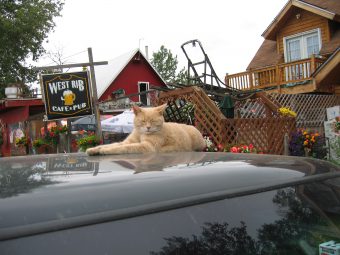 We’ve talked before about animals who’ve gone above and beyond what you’d normally expect animals to be capable of like that cat that works for the British government and a baboon who worked as a (surprisingly good) signalman for a railway company. In each case special accommodations were made for the animals to better help them do their duties; but what accommodations are made when an animal has, shall we say, higher aspirations and enters the world of politics? As it turns out, not all that many.

This is largely because, in every example of an animal being elected to office we could find, the position the animal held was ceremonial in nature. And in perhaps the most famous case, saying the animal is even the honorary mayor is somewhat of a stretch. Case in point, you may have heard of Stubbs, a cat who has supposedly been the elected mayor of a small town in Alaska called Talkeetna since 1997. There are several variations of Stubbs’ story though the most commonly touted version is that Stubbs became mayor after residents, dissatisfied with the human candidates running for office, elected him as a write in candidate.

In actuality Stubbs holds no official position; the whole him-being-mayor-thing is, as one Alaskan resident bluntly put it, “a PR scam”. Stubbs was never elected on any write-in ballot because there was never an election in the first place. Stubbs isn’t the elected mayor, or even the elected honorary mayor. He’s a marketing stunt perpetrated by the townsfolk of Talkeetna thanks to a small, but thriving cottage industry that has sprung up around their most famous feline resident.

Along with some stores selling souvenirs with Stubbs’ face on them, the town has also seen an uptick in tourism to the tune of 30 or 40 people a day hoping to meet the “mayor”. In other words, it’s in the best interests of Talkeetna to play up to the notoriety of being a town with an elected feline mayor.

A similar story is that of Bosco Ramos, a black lab rottweiler mix who was genuinely elected mayor of an unincorporated census-designated place in California called Sunol in 1981, serving in the role for 13 years until his death. How he got into the job in the first place was simply that his owner thought the whole thing would be funny, so entered him in the race under the platform “Dogs are People Too” and with campaign promises including, “A bone in every dish, a cat in every tree, and a fire hydrant on every corner.”

Unlike Stubbs, Bosco was elected and even ran against two human beings, both of whom he beat in a landslide. However, his position was described as being “purely ceremonial” in nature.

The same can be said of Duke, a dog who became the honorary mayor of a small town in Minnesota, winning by 9 votes. It should be noted here that the town only had 12 residents, meaning I guess he technical won by a landslide. Funny enough, the individual who ran against Duke, one Richard Sherbrook, even claims he voted for the dog, rather than himself.

Again, Duke’s position was ceremonial but, the residents of the town were happy to have him as mayor, with Sherbrook describing the idea of having a dog as mayor as “pretty cool”.

Cool or not, since the animals only hold ceremonial positions, there are no official mayoral duties expected of them, nor are there any salaries, assistants, or similar trappings, though the animals are seemingly taken much better care of than most of their respective species.

However, just because nobody expects a canine mayor to do anything, it doesn’t mean their terms in office aren’t gleefully noted by the local populace as if the animal did function as an actual, official mayor. Going to back to Bosco for a moment, while he was in office, the doggy mayor would regularly meet with the citizens of Sunol, taking daily strolls about the town to meet with his constituents.

While serving as mayor, Bosco became something of a celebrity, appearing on TV (earning $2,000 to his owner in one such appearance) and at one point caused an international incident when Chinese newspapers widely reported on his election as an example of the shortcomings of democracy and why it should be avoided. Bosco (literally) took all this in stride and when the Tiananmen square incident happened in 1989, was invited to join protests organised by students at Berkeley and Stanford in front of the Chinese embassy as an honored guest. His owner accepted the offer.

Bosco also led the Halloween parade every year and attended formal events wearing a doggy tuxedo. When he wasn’t being formal, Bosco was recognisable due to his habit of wearing a red bandana. 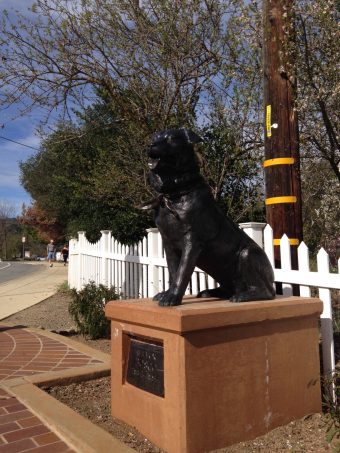 It wasn’t all smooth sailing for Bosco though and his tenure wasn’t without controversy, one of the most infamous being his liaisons with numerous female dogs while on the clock, resulting in numerous illegitimate pups being sired. In addition, Bosco also went missing for a week in 1987, turning up a week later with a stick in his mouth; he never revealed where he went, so it’s assumed he was enjoying a raunchy rendezvous with a female dog. Bosco also frequently got caught being bribed with ice cream and would act aggressively when people withheld his favourite treat, beef jerky.

After his death in 1994, the people of Sunol paid tribute to Bosco by erecting a bronze bust of “the world’s first canine mayor”. Despite his well-known love of formal clothing, the artist responsible for Bosco’s statue chose to depict him in his everyday attire.

So to sum up, when you hear a story about an animal becoming mayor, chances are the position is purely ceremonial and the animal has no official duties to speak of so they don’t need all that much help to carry them out. And in some cases, the animal in question may not have even been elected at all, just given their position as something of a publicity stunt.