When a Marketer Invents a Comic- The Story of Garfield 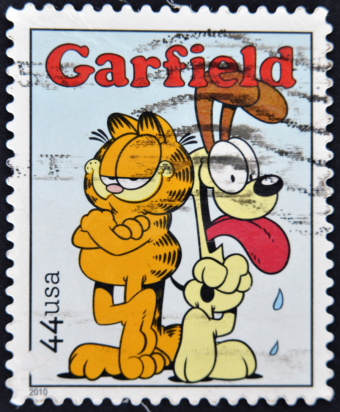 There are generally three things everyone knows about Garfield- it’s all about a cat that hates Mondays, loves lasagna, and that it’s not really that funny. While the latter point may seem subjective, according to Garfield creator Jim Davis, the point of Garfield was never for the comic to be hilariously funny, but rather be relatable and, with that accomplished, serve as a vehicle to sell Garfield merchandise. As Davis himself stated in a 1982 interview with the Washington Post, Garfield was nothing more than “a conscious effort to come up with a good, marketable character.” As to why he chose an animal, well, to quote him again, “Snoopy is very popular in licensing. Charlie Brown is not.”

By 1977 Davis was getting nowhere with the comic. He simply couldn’t understand why nobody else found gnats as funny as him- and yes, unlike Garfield, Gnorm Gnat was supposed to be very funny.

For almost five years he had been printing the gag-a-day comic in a small Indiana town newspaper called the Pendleton Times. The comic, as noted, featured a collection of sarcastic bugs, like the title character Gnorm Gnat, a fruit fly with two weeks to live, a dumb dense slug, and an intellectual worm named Dr. Rosenwurm.

Looking for a bigger audience and a larger payday, Davis continually attempted to get the comic syndicated in newspapers across the country, but rejection after rejection kept coming back. “I got so many rejection slips, I could have papered my bedroom wall with them,” Davis told the Los Angeles Times in 2001. Finally an editor who rejected the comic gave him some frank criticism, “Your art is good, your gags are great, but bugs—nobody can relate to bugs!”

This sealed the bug’s fate. Shortly thereafter he had Gnorm Gnat unceremoniously disposed of by a foot, and ceased making the comic. Now, it was time for Davis to come up with a new comic strip- one that he hoped would be universally relatable.

Described as someone with “the soul of an ad-man” who cut his teeth in an advertising agency before trying his hand at comics, Davis studied the popular syndicated comic strips of the day to see if he could spot a common thread between them. During his research, he noticed that comic strips about or starring dogs, like Peanuts and Marmaduke, were especially popular.  This, of course, makes sense because dogs have literally been bred for centuries to be what humans consider awesome.

At the same time, Davis noticed that nobody had yet created a popular comic about a cat, which he saw as being a huge gap in the market. After all, a not inconsiderable percentage of the population prefers cats to dogs, or loves both. He stated, “I felt that, if dog lovers like dog strips, surely cat lovers would like to see a cat out there.”

Davis also grew up on a farm in Indiana with a couple dozen cats, so he was familiar with their distinctive behaviors, both domesticated ones and feral, such as their stereotypical laziness. He also used elements of himself and his grandfather as inspiration for the character. Much like his grandfather, Garfield was large and grumpy. Like himself, the cat loved lasagna. And in homage to his grandfather, James Garfield Davis, he named the cat after him. (Yes, contrary to popular belief, Garfield was not named after U.S. President James Garfield.)

With the character and his personality more or less set, Davis came up with, as Chris Suellentrop from Slate so eloquently put it, “a stable of recurring, repetitive jokes for the cat”, that he could recycle endlessly, allowing him to churn out Garfield comics with as little effort as possible, which is amazingly fitting if you think about it.

It’s at this point that we should also point out another advantage to having an animal as the main character is that animals could get away with more jokes and not worry so much about being politically correct. “By virtue of being a cat, Garfield’s not black, white, male or female, young, or old or a particular nationality,” Davis told the Washington Post in 1981. “He’s not going to step on anyone’s feet if these thoughts are coming from an animal.”

That said, Davis also very deliberately avoided political or social commentary in Garfield strips, both to ensure they were as inoffensive as possible and also so that it would appeal to the broadest audience both in the present and over time. He sagely noted in a Mental_Floss interview concerning this, “I purposely avoided sociopolitical comment… 30 years from now, people wouldn’t understand it… It’s more important to have a body of work resonate with the reader than it is to have an individual gag [resonate].”

Davis also went out of his way to make sure the cat’s appeal crossed borders. As he said in 1982 interview,

Garfield is an international character. Therefore, I don’t even use seasons. The only holiday I recognize is Christmas. I don’t use rhyming gags, plays on words, colloquialisms, in an effort to make Garfield apply to virtually any society where he may appear… I would like for readers in Sydney, Australia to think that Garfield lives next door. Dealing with eating and sleeping, being a cat, Garfield is very universal. By virtue of being a cat, really, he’s not really male or female or any particular race or nationality, young or old.”

Going back to the marketing side of things, Davis once again drew inspiration from Peanuts noting in an anniversary compendium of Garfield strips that he saw the commercialisation of Snoopy in particular as, to quote, “a template that I could apply to Garfield”.

And this wasn’t just for the animal appeal, but also because, as he told the Chicago Sun-Times, “After 50 years, Snoopy was still laying in that dog house, and rather than getting old, it actually has the opposite effect.” In other words, the Snoopy template allowed for continuing the same old gags over and over and over again with people still loving it, and buying the merchandise, eventually if nothing else but for nostalgia’s sake.

In June of 1978 Garfield found its way into some 40 newspapers. Less than two years later it could be found across the world in over 800. By late 1982, four and half years after the debut, it was in a whopping 1,400 newspapers. Fast forward a few decades and even in 2013 with the downfall of many newspapers world-wide, Garfield still showed up in over 2,500 newspapers and journals. In fact, Garfield currently holds a Guinness World Record for being the most widely syndicated comic strip in history.

Using this platform of the most read comic in the world, Davis was able to easily execute stage two of his, quite frankly, genius plan- merchandising.

Unlike the creator of Calvin and Hobbes, Bill Watterson, who famously not only passed up, but fought vehemently against merchandising Calvin and Hobbes beyond the comic material itself (and, note, this includes the near ubiquitous and completely unauthorized “Calvin peeing” stickers which Watterson joked of, “long after the strip is forgotten, those decals are my ticket to immortality”), Davis had no qualms about leveraging his ingenious creation to squeeze every dime possible out of it. That said, in all merchandising and licensing opportunities, he does strongly consider how something might harm the brand, whether because of poor association or simply oversaturation to the point of people getting sick of Garfield.

For example, in the late 1980s and early 1990s Garfield suction cup plush toys became hugely successful to the point of almost achieving fad status. He stated of this crisis, “We accepted the royalty checks, but my biggest fear was overexposure.” In it for the long term, to solve the problem, “We pulled all plush dolls off the shelves for five years.”

But the plush dolls weren’t the only place money was pouring in from. In fact, even in the early days of the comic’s popularity, Davis admitted to only spending a little over a dozen hours a week working on the comic itself, with another 60 or so hours spent coming up with and managing merchandising and licensing deals and ideas.

This includes everything from your standard books (which by the way at one point saw Garfield with 7 such books on the New York Times Bestseller List at the same time), cartoon specials, lunch boxes and stuffed animals, to Garfield slot machines in Las Vegas, toilet seat covers, a Garfield Restaurant, and even educational material, with Garfield licensed in some regions for use in textbooks teaching children English.

You might at this point be wondering how much Davis has made from Garfield given its success both as a comic on its own merits and the behemoth that is the merchandising side of the business. Well, nobody knows for sure but Davis and presumably the IRS.  That said, it is known that sales of Garfield merchandise grosses in the ballpark of billion dollars- yes billion- every single year world-wide, even today.

So we guess you kind of have to hand it to Davis- not only did he achieve his goal of creating an enjoyable comic for the masses, but also has masterfully run the business side of things, making him probably the most successful comic creator in history on both fronts, with no end in sight.

Yes, unlike so many other comic artists over the years who’ve famously very abruptly ended their strips when their bank accounts were large enough and they felt they’d hit a creative roadblock, Davis stated he has no such intention.

However, to save time and risk of burnout, he’s long since stopped drawing the cartoons himself, usually leaving that to employees of his rather large company. As for running out of ideas, well, the comic was designed to be repetitive as a positive feature of it. He further notes, “I’ve never worried that I would run out of material because I’ve never written the material. I just watch Garfield. I put him in my head like a TV screen and watch him. I ask what he would do, what he would say. It’s almost like a working meditation. I just edit the material.”

That said, in more recent times, Davis has also leveraged a subset of his many dozens of employees to generate rough ideas for future comics. Of this process, he notes, “I see gags and I work with assistants on the strip and stuff like that. We do roughs and it all filters through me so that it has one voice. We all get together occasionally in the same room and draw and work on shapes of fingers and gestures and expressions and things like that so that if any one of us draws it, you can’t tell which one did it.”

In the end, Davis summed up his rather impressive life’s work (both in the entertaining comic he created and the amazing business acumen demonstrated in its creation and growth over time), “I think part of the appeal is, you know, like with Peanuts, you always want to go back to see Snoopy on the doghouse. In such a changing world, [readers] want to know that some things stay the same, so I feel a responsibility to keep Garfield loving lasagna and hating Mondays; he’s never going to go on a diet.”

And by the way, unlike his famous character, Davis has on several occasions noted he himself loves Mondays.