The Curious Case of the Fruit That Transforms Sour to Sweet 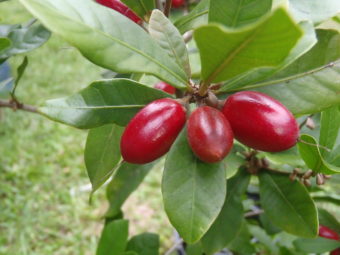 The plant that produces the berries, Synsepalum Dulcificum, is native to West Africa, where the fruit was traditionally used to sweeten palm wine and make soured cornbread more palatable. Growing best in acidic soil in tropical zones, the coffee-sized berries were introduced to Europeans by the explorer Chevalier des Marchais.

Not a subtle effect, the perceived sweetness produced by the miracle fruit can be remarkable – equivalent to up to a 17% sucrose solution. For reference here, the equivalent sucrose solution for typical soft drinks is only about 10%. The effect is things like Tabasco sauce reportedly changing flavor to that of doughnut glaze, among a myriad of other weird taste alterations.

To date, the miracle fruit has yet to be developed into a commercially-viable non-caloric sugar substitute in the United States, although an attempt was made in the 1970s. However, the day before the product was to launch under the brand name Miralin, the FDA suddenly switched from original plans to classify it as generally recognized as safe (GRAS) to classifying it as a food additive (which meant years of further testing to be deemed safe). This was a highly controversial move given that the berries had been regularly eaten for centuries in Africa without apparent ill effect. The project backers lacked the funding to conduct the years of testing needed and Miralin ultimately folded.

However, because of the circumstances of the FDA’s decision-making process, it was suggested that the sugar industry flexed its political muscles to sabotage the project. As such, using the Freedom of Information Act (FOIA), Miralin ultimately requested documents related to the FDA’s processing of their product. Fanning the conspiracy theory flames, when the files were produced, most of the documents were inexplicably completely blacked out, and there was no mention anywhere of why the FDA suddenly chose to switch from a GRAS classification to classifying the substance as a food additive.

Whatever the case, the berry has been classified as a harmless additive in Japan, where researches are fiddling with it using recombinant technology. For instance, using genetic modification, they have managed to produce lettuce that expresses miraculin equivalent to one miracle berry with just two grams of lettuce leaves.

In 2009, an oncologist at Miami’s Mount Sinai Medical Center also filed an investigational new drug application with the United States Food and Drug Administration (USDA) for the use of the miracle fruit with chemotherapy patients. From anecdotal evidence, the oncologist had discovered that some patients found it helped counteract the metallic taste byproduct of chemotherapy.