The Surprisingly Interesting Reason Chicago is Called the “Windy City” 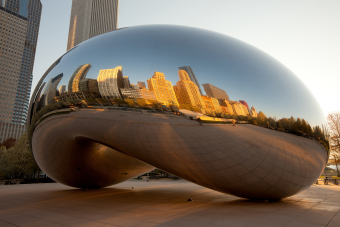 On a particularly blustery February South Side day, it is easy to understand why the city of Chicago has the nickname of the “Windy City.” After all, it has one of the roughest winters of all major American cities and it does get pretty regular gusts. But, in truth, it actually isn’t all that windy, relatively speaking; in terms of average annual wind speeds, Chicago ranks as the 73rd windiest city out of 275 cities where data is collected from – behind other major cities like Cleveland, San Francisco, Boston and New York City. (This is not dissimilar to the fact that Seattle doesn’t actually get that much rain, ranking 44th among major cities in the United States on that front, with less rain than such cities as New York, Houston, and Boston.) So, why does Chicago have the reputation of being so windy and where did it get the nickname?

While the word “Chicago” has Native American origins, the origin of the “windy city” moniker seems to have more to do with infamous Chicago politics than weather patterns.

For most of the 19th century, Chicago went by other nicknames, including “Garden City” in reference to the city’s immense collection of beautiful gardens, parks and Victorian-era rural cemeteries. There was also “City by the Lake” and “Heart of America,” which are fairly self-explanatory. Beyond these, the city was sometimes called the “Second City,” which the famed Chicago comedy troupe still goes by. The origins of this stem from civic pride, with Chicago literally rising from the ashes of the catastrophic 1871 fire and becoming the second most populated city in the country only two decades after the fire, partially due to extensive rebuilding efforts, see: Was the Great Chicago Fire Really Started by a Cow? (However, only a few years after that, Los Angeles would knock Chicago to third. Today, Chicago is still third in population though Dallas and Houston are gaining fast.)

As for “windy city,” according to esteemed etymologist Barry Popik, who’s also the word-nerd who managed to definitively track down Why New York City is called The Big Apple, the first known usage of the term “windy city” in reference to Chicago can be found in an April 1858 edition of the Chicago Daily Tribune, where it notes: “An hundred militia officers, from corporal to commander, condemned to air their vanity and feathers only for the delectation of the boys and servant girls in this windy city.”

This is followed up by a July 4, 1860 edition of the Milwaukee Daily Sentinel that notes, “We are proud of Milwaukee because she is not overrun with a lazy police force as is Chicago — because her morals are better, he [sic] criminals fewer, her credit better; and her taxes lighter in proportion to her valuation than Chicago, the windy city of the West.”

More poignantly making the figurative connotation crystal clear, it was noted by a Cincinnati Times reporter in the 1866 publication of Chronicling America,

Chicago is a very windy town. There is probably more blow about that place than any other in the world. In comparison to its “blows” the dreaded Simoon is only Simoonshine. The elements are combined to form a monster ear trumpet, the little end of which is inserted into the public ear, and thro’ it all Chicago blows the praises of that wonderful city, until it makes the public head ache — actually splitting the ears of the groundlings.

Over the course of the next few decades, there are many similar instances of individuals from Cincinnati particularly noting Chicago was a “city of wind” or a “windy city.” As with the aforementioned examples, these were often not talking about literal wind, but referencing things like Chicago’s elites – such as politicians and bankers – who were purportedly always full of hot-air and constantly looking to con regular citizens.

This nickname and its figurative sense was even reported on all the way in New York, when, in 1867, the New York Evening Post (later with the same message repeated in the Philadelphia Public Ledger) noted, “The controversies between the Cincinnati, Chicago and St. Louis newspapers as to the importance of their respective cities, is amusing to outsiders. The Cincinnati Commercial lately called Chicago a ‘city of wind’…”

While this sort of civic name-calling and city rivalry isn’t quite as common today, at this time citizens of certain cities often jumped at any chance to take jabs at their neighboring cities, sometimes even when disasters struck.  For instance, when a twister hit Chicago in the 1880s, the Cincinnati writers, rather than showing concern for the people affected, took the chance to make fun of Chicago by saying that the tornado failed to knock down the buildings because they “were so heavily weighed down with mortgages that no whirlwind could affect them.”

By the late 1880s, reporters in other of Chicago’s surrounding major cities, like St. Louis and Cleveland, had copied the frequent Cincinnati taunt and were likewise regularly calling Chicago the “windy city”.

In 1890, Chicago was in competition with New York to get the 1893 World’s Fair and a fair bit of mudslinging ensued over which city was best. It is claimed that the editor of the New York Sun, Charles A. Dana, took up the mocking moniker for Chicago when he wrote a passionate plea to his readers about why New York deserved the World’s Fair over Chicago. In the article, he supposedly wrote that everyone should ignore the “nonsensical claims of that windy city. Its people could not hold a world’s fair even if they won it.” He further supposedly noted that Chicago was “a dingy aggregation of disgraceful hovels situate in a dank and foul morass, disgracing a noble sheet of water; the air polluted not only by natural decay but also by the dense effuvia arising from Chicago’s crude and filthy habits…” Of course, Chicago did end up beating out New York to host the 1893 Columbian Exposition.

It should be noted here, however, that while both the Chicago Public Library and Chicago Historical Society claim that this how the term was popularized, the Dana editorial has actually never been found and the first known reference to it is a whopping four decades later in a 1933 Chicago Tribune article “Chicago Dubbed `Windy’ In Fight For Fair of ’93” purporting to explain how the city got the nickname.

Today, most etymologists think that the “Dana popularization/origin” story isn’t correct given that going all the way back to the 1860s there were many references, from St. Louis to New York, to Chicago being called the “windy city,” with the same mocking sense Dana used (along with the occasional reference to literal wind).

In the end, despite its mostly mocking origin, the city ultimately embraced this moniker. In fact, the Chicago tourism industry even occasionally used the phrase in the literal sense as a way to promote itself as a great summer vacation spot, with the winds off of Lake Michigan supposedly keeping sunbathers cool on the nearby beach.