March 4, 2014 Daven Hiskey
This is an excerpt from our new book: The Wise Book of Whys, available in: Print | Kindle | Nook | Audiobook 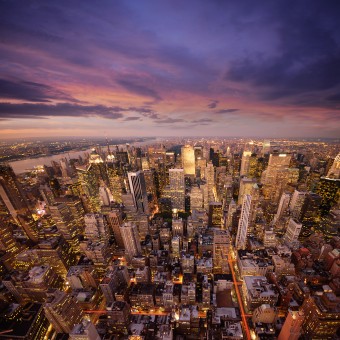 The earliest documented reference to New York being referred to as “The Big Apple” comes from a 1909 book by Edward Martin, called The Wayfarer. In it, he uses the moniker in a metaphorical sense, rather than a proper name for the city:

The next known documented instance of New York being called “The Big Apple” comes from sportswriter John J. Fitz Gerald who began popularizing the name starting on May 3, 1921, where he stated in a column:

J. P. Smith, with Tippity Witchet and others of the L. T. Bauer string, is scheduled to start for ‘the big apple’ to-morrow after a most prosperous Spring campaign at Bowie and Havre de Grace.

In this case, he was referencing the early 1920s practice of calling certain race courses in the New York City region this particular fruity name; the New York City races tended to payout significant prizes to the winner compared to races in many other regions, hence “big apple.”

According to linguist Dr. Gerald Cohen, this wasn’t out of the ordinary, even outside of horse racing. As he states,

Apples were important throughout history, but the big red delicious apples developed in Iowa in the 1870s came to be regarded as extra special. That led to ‘the big apple’ being applied to things and people who were extra special, or perhaps only thought they were…

As to applying this to New York City, it’s thought that Fitz Gerald didn’t come up with this on his own but rather heard it from people from New Orleans in 1920 when he traveled down to that city to supposedly sell one of his horses, with the common tale being that it came from a couple of stable hands.

Fitz Gerald explicitly mentions this three years later in his 1924 column “Around the Big Apple,” though it’s possible he just made the story up:

The Big Apple. The dream of every lad that ever threw a leg over a thoroughbred and the goal of all horsemen. There’s only one Big Apple. That’s New York. Two dusky stable hands were leading a pair of thoroughbred around the ‘cooling rings’ of adjoining stables at the Fair Grounds in New Orleans and engaging in desultory conversation. ‘Where y’all goin’ from here?’ queried one. ‘From here we’re headin’ for The Big Apple,’ proudly replied the other. ‘Well, you’d better fatten up them skinners or all you’ll get from the apple will be the core,’ was the quick rejoinder.

This nickname for New York City gradually caught on and began being used in a non-sporting sense, including a popular song/dance coming out in the 1930s called “The Big Apple,” as well as numerous references in other songs, particularly in jazz music.

However, this nickname for the city died off by the 1960s and few outside of the city would have understood the reference had you used it then. That all changed in the 1970s when Charles Gillett and the New York Convention and Visitors Bureau decided to revive the nickname in a tourism campaign. In this campaign, they began aggressively advertising New York City as a tourist hotspot and referred to it as “The Big Apple,” using bright, clean looking red apples in their advertisements to attempt to contrast the popular notion of the day that New York City was a dirty place where you were as likely to be mugged as not if you visited there.