From Desert to Party Central: The Birth of Las Vegas 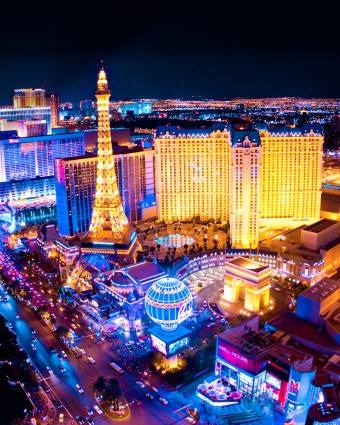 For thousands of years, Mohave tribes dotted the land in and around what is now the modern-day city of Las Vegas. Sometime in the 1770s, Spanish missionary Francisco Gracias became the first foreigner to encounter the tribes. As he detailed in his travel notes, their meeting was quite friendly.

In 1826, the first English-speaking explorer, Jedediah Smith, came upon this land and the tribes. In a letter he wrote to General William Clark, the Superintendent of Indian Affairs for the US, he described his peaceful encounter,

After traveling 300 miles in that direction through a country somewhat fertile, in which there was a great many Indians, mostly naked and destitute of arms, with the exception of a few bows and arrows and what is very singular amongst Indians, they cut their hair to the length of three inches; they proved to be friendly; their manner of living is on fish, roots, acorns and grass.

Only three years later, the Mexican trader Antonio Armijo was traveling with his company through the area (though a bit to the north) to forge a trade route from New Mexico to Los Angeles. They were thrilled to find the valley to be somewhat fertile and wet, unlike most of their desert travels. So, they named it “Las Vegas,” meaning “fertile plains.”

The great explorer John Fremont, appointed by President John Tyler, led a company of surveyors and scouts through the valley and beyond in 1844. He went on to publish his report that ended up being the guide for settlers in years to come, entitled “Report of the Exploring Expedition to the Rocky Mountains 1842 to Oregon and Northern California in 1843-44.” In it, he describes “gushing springs” that were great to swim in.

Within ten years, the Las Vegas Valley had been settled by a variety of explorers, settlers, traders, and missionaries. In 1854, the US Congress commissioned it be a regular stop on the monthly mail service route between Salt Lake City and Los Angeles while appropriating $25,000 (about $638,000 today) for military and mail roads. Among the missionaries settling down in Vegas were Mormons. In fact, Brigham Young in spring 1855 called for thirty men to make their permanent home in the Las Vegas Valley with the assignment to “build a fort there to protect immigrants and the United States mail from Indians.”

For the next fifty years, settlements in the Las Vegas Valley continued as not much more than train stops, sporadic mining towns, and trading posts. According to Robert McCracken’s book “Las Vegas: The Great American Playground,” May 15, 1905 was when all that changed and Las Vegas at least began to resemble the town we now know today.

On that day, three thousand speculators arrived mostly from LA and Salt Lake City  and were given a chance to bid on lots of land along the railroad. The man who initiated this owned the land near the railroad and figured to make a tidy profit from the sales. This man was US Senator William Andrews Clark, whom the county that Las Vegas currently resides in is named after – Clark County. Directly thereafter, businesses and establishments that catered to the railway traveler and worker were built. Downtown Las Vegas was born.

Completely counter to modern Vegas, it was technically a “temperance town” during its early years, meaning that “no liquor clauses” were written into the deeds of the lots. But there were exceptions. Many of them. Drug stores, doctor offices, and restaurants that served food were all allowed to sell alcohol. Additionally, after much push back, establishments in Block 16 and Block 17, between first and third street on Ogden and Stewart Streets, were given the green light to serve. This became known as the “red-light district” of old Las Vegas. Bars, saloons, hotels, and brothels populated the area with the Arizona Club being the biggest of them all. Despite this, in 1910, gambling was officially made illegal. At least in theory.

For the rest of the country, the Eighteenth Amendment was ratified in January 1919 and went into effect the following January. Prohibition was official in the United States. Las Vegas, according McCracken’s book, “resisted compliance with the national laws to the best of its abilities.” City officials would let business owners know when they would be visited by federal agents far in advance. Arrests were few and far between. Fines were more frequent, but even those were quite nominal, mostly as a punishment for not being discreet enough. Although many big cities had speakeasies and a prosperous bootlegging industry, Las Vegas was nearly lawless in the matter. Along with prostitution being legal at this point, it was around this time that Las Vegas earned its nickname “Sin City.”

The Twenty First Amendment went into law in December 1931 and Prohibition was officially repealed across the country. But it was actually a completely different kind of government intervention that caused the population of Las Vegas to boom. Construction began on the Boulder Dam (later called Hoover Dam) in 1931, fifty miles from Vegas.

As thousands upon thousands of young, able bodied men descended upon the giant public project, the government attempted to keep them in a dry and “wholesome” community nearby called Boulder City.

It didn’t work. The population of Las Vegas, a place where tired workers could drink, fraternize, and frequent prostitutes to their monies’ content, quadrupled in the first year of construction of the Boulder Dam. The influx of people brought immediate growth in every avenue. More saloons, bars, brothels, and hotels were constructed. Casino gambling was legalized by the Nevada legislature in December 1931.

In order to keep up with the demand, more city projects were begun, including paved roads, a sewer system, and police stations (to keep up with the increase in crime). Tourists coming from all over the country to witness the man-made marvel of Boulder Dam being built also made sure they stopped in Las Vegas. From the beginning of the project in 1931 to 1939, the online Nevada Encyclopedia states that $70 million more came into the city of Las Vegas than was spent on the Hoover Dam.

The Las Vegas Club, Apache Hotel, and Northern Club were the first hotels to get their casino licenses. They were all located on Fremont Street. Construction slowed during World War II, but in December 1946, on what is now known as the Strip, the Flamingo opened. This hotel and casino with its 105 rooms was known as “The World’s Greatest Resort Hotel.” Named after a nickname of the girlfriend of the majority owner (due to her long skinny legs), this would be what every Vegas Hotel & Casino would be modeled after going forward. That majority owner was reputed Los Angeles gangster and criminal Bugsy Siegel. And so began, Las Vegas’s famous ties to the mob.

The Las Vegas we now know today may be full of buffets, glamorous live entertainment, 24/7 gambling, and poolside drinks, but the beginnings of “Sin City” dates all the way back to when there were no streets, neon signs, or even railroads. It was just a fertile plain located in the Mojave Desert.