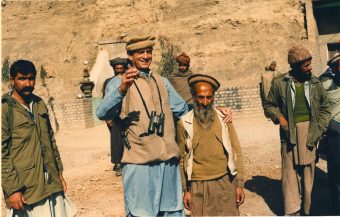 As well-known for leading a flamboyant, playboy lifestyle as being the mastermind responsible for funneling $5 billion dollars (about $12 billion today) to Afghan rebels (when they were on our side) in their fight against the Soviet Union, Texas Congressman Charlie Wilson was a larger than life character who serves as a stark reminder of how different the political landscape was before social media and the 24 hour news cycle. So it should come as no surprise that his first introduction into politics was just as notable as his later exploits.

Charlie was born on June 1, 1933 and raised in Trinity, Texas, a small town north of Houston. As he explained in the book Charlie Wilson’s War: The Extraordinary Story of the Largest Covert Operation in History, written by George Crile, when Charlie was 13, his dog strayed into his neighbor’s, Charles Hazard’s, yard one too many times. Hazard, living up to his name, fed the dog something that contained crushed glass, ultimately leading to the dog’s death.

Unsurprisingly, Charlie sought revenge – first by setting Hazard’s garden on fire with a little help from a decent amount of gasoline. This did not satisfy him, however. Realizing the man sat on Trinity’s City Council, Charlie decided to hit Hazard where it really hurt. Organizing a campaign against the dog-murderer, Charlie took the family Chevy truck and in total drove just shy of 100 voters to the polls for the next City Council election. As each voter left the vehicle, Charlie told them what Hazard had done to his dog.

The 95 voters transported by Charlie that day comprised about 25% of those that voted. Hazard lost his bid for reelection by 16 votes. Making sure Hazard knew Charlie was behind the loss, he went by his house after and told him maybe he “shouldn’t poison any more dogs.”

As you may or may not already know, Charlie went on to be rather successful in politics, although it appears mostly due to a fair amount of personal charm and ingenuity, rather than strictly hard work and adherence to the rules.  In fact, his political career was highlighted by various sexcapades, drunken car crashes (including a hit and run, which he was only fined $25 for), being a functioning alcoholic, investigations for drug use (including cocaine), and stealing a car used by one of Lyndon B. Johnson’s Secret Service agents and then hiding it in an alley. Why? He felt Johnson’s Secret Service agents were “assholes” and this one in particular had double parked, blocking his car.

Never seeming to learn from his mistakes, Charlie noted in an interview that his largely Christian voter base continued to elect him because “When the day was done, the working people knew I was on their side, and the blacks knew I was on their side. And it’s hard to explain, but there is a tolerance for human frailty that doesn’t exist outside of East Texas… The good Lord blessed me with the world’s most tolerant and forgiving constituency…”

As for the more direct start of his political career, receiving an appointment to the U.S. Naval Academy at Annapolis, Charlie was infamous for his poor grades, shoes lacking polish and missing curfew. In fact, when he graduated 8th from the bottom in 1956 with a degree in electrical engineering, he left with the distinction of having the most demerits in the history of the academy.

Serving in the Navy for five years, Charlie violated the rules and ran for Texas state representative while still on active duty (a no-no as active duty individuals are not allowed to hold public office.) Utilizing his charm, however, Charlie campaigned door to door, winning the election.

He was just 27 when he began the first of his 12 terms as a Texas legislator. Because he was Democrat in the mode of JFK, he earned the nickname the “liberal from Lufkin”.

Tall, handsome and charming, Charlie was a well-known womanizer, with his exploits frequently being reported in the media right down to his bedroom hot tub equipped with handcuffs, as well as an incident in Las Vegas in which he ultimately was investigated for cocaine use. As for Charlie, he noted of that particular escapade,

The girls [strippers] had cocaine, and the music was loud. It was total happiness. And both of them had ten long, red fingernails with an endless supply of beautiful white powder…. The feds spent a million bucks trying to figure out whether, when those fingernails passed under my nose, did I inhale or exhale, and I ain’t telling.

Despite such unabashed behavior, Charlie paradoxically had no trouble getting votes from women; he once described his appeal:

Feminists like me because I am an unapologetic sexist, chauvinist redneck who votes with ’em every time…

On that note, Charlie’s political platform was largely built on pushing for equal rights for women and minorities, raising minimum wage, tax exemptions for the elderly and Medicaid.

Not just surrounding himself with beautiful women outside of the office, Charlie did so within as well. After he became the U.S. Congressman for Second Congressional District for Texas, he broke with Washington, D.C. tradition and employed a bevy of female staffers, publicly stating of his choice in hiring women instead of men in an era when that was rarely done, “You can teach ’em to type, but you can’t teach ’em how to grow tits…”

Young, hard working, and beautiful, including one Miss USA, the female contingent in his office became known as “Charlie’s Angels.” Charlie noted that many of his fellow politicians didn’t mind and that “Bill Clinton used to say I was the only congressman who didn’t need an appointment to see him, as long as I didn’t come understaffed…”

As for Charlie’s work, his most famous achievement was getting the Afghan rebels funding, with this memorialized in the movie Charlie Wilson’s War (2007), starring Tom Hanks and Julia Roberts. Initially a cause of his close friend, conservative Houston socialite Joanne Herring, Charlie parlayed his influential positions on the House Appropriations Committee and Subcommittee on Foreign Operations into billions of dollars to support efforts against the Soviets (who had invaded the country in 1979).

Spurred by Herring to help, Charlie visited a refugee camp in Pakistan early in the war and, after seeing the suffering there, was sold on supporting them. He noted of this experience,

…going through those hospitals and seeing, especially those children with their hands blown off from the mines that the Soviets were dropping from their helicopters. That was perhaps the deciding thing… and it made a huge difference for the next 10 or 12 years of my life because I left those hospitals determined, as long as I had a breath in my body and was a member in Congress, that I was going to do what I could to make the Soviets pay for what they were doing!

And that, “The U.S. had nothing whatsoever to do with these people’s decision to fight … but we’ll be damned by history if we let them fight with stones.”

Working over the next decade, through numerous clever dealings (and voting for military contracts in his colleagues’ districts to get their support), Charlie succeeded in increasing support for the Afghans from a few million in the early 1980s to $750 million (about $1.7 billion today) each year by the end of the decade.

More than just money, at various times Charlie also provided things like mules (from Tennessee), stinger missiles, and walkie-talkies- some of the latter he purchased at a Virginia Radio Shack when the CIA refused to provide more advanced field radios. (Not that the CIA’s relationship with him wasn’t good, with Charlie becoming the first civilian to be given the CIA’s Honored Colleague Award.) 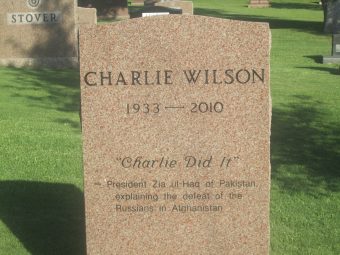 Declining to seek re-election in 1996, Charlie retired, ultimately dying of cardiac arrest on February 10, 2010 at the age of 76 in Lufkin, Texas.

And if you’re wondering about Charlie’s thoughts given what has happened in Afghanistan since the Soviets left, he laments that the U.S. didn’t choose to stick around and help rebuild Afghanistan, resulting in a power vacuum and instability in the region that allowed the Taliban regime to take hold. He further defended the former support the United States gave to certain infamous individuals, including Osama bin Laden, stating in a Time magazine interview shortly before his death,

We were fighting the evil empire. It would have been like not supplying the Soviets against Hitler in World War II. . . . Anyway, who the hell had ever heard of the Taliban then?

And that, “You think this f—er [Ayman al-Zawahiri] they’re chasing around now in the tribal areas of Pakistan is terrifying? Well, what was terrifying was a nuclear exchange between us and the Russians. What was terrifying was the idea of a Soviet invasion of Western Europe and what we would have had to do about that. I have absolutely zero regrets.”