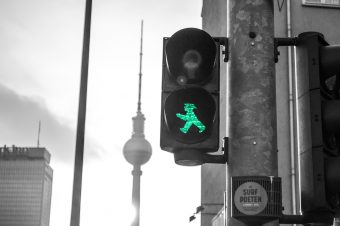 When East Germany passed into history in 1990, the newly reunited Germany happily set about removing every last vestige of the old Soviet-dominated police state. If you visit the capital city of Berlin today, you’ll find very few signs that the old country ever existed…until you try to cross the street.

In 1961 an East German traffic psychologist named Karl Peglau was assigned to see if he could find a way to reduce the rising number of traffic fatalities in East Berlin, the capital city. Some 10,000 people had died in traffic accidents between 1955 and 1960, and as Peglau pored over the numbers he saw that many fatalities were pedestrians who were hit by cars while crossing the street. At the time, East Berlin didn’t have traffic lights for pedestrians, not even at crosswalks.

Peglau thought installing some would help. He wanted them to be so simple that small children, the elderly, people who were colorblind, and people with cognitive difficulties could easily understand them. Then he hit on the idea of covering ordinary traffic lights with stencils that changed the shape of the emitted light into a symbol. The green light would look like the profile of a walking man. The red light would show a man with his arms outstretched, as if he were physically blocking people from crossing the street.

Peglau handed off the idea to his assistant, Annelise Wegner, and told her to work out the details. To increase the amount of light emitted and to make the character more appealing to children, Peglau instructed Wegner to make the little men chubby and friendly in appearance. The designs that Wegner came up with—fat little men in porkpie hats—were so cheery and playful that Peglau feared they’d never be approved by the humorless communist bureaucrats that he reported to.

He was wrong. The designs were approved, and the first Ampelmännchen, or “little streetlight men” as they came to be known, began appearing on the streets of East Berlin in the fall of 1961. Just as Peglau hoped, the Ampelmännchen were popular with children, who happily waited on the sidewalk until the little green man told them it was safe to cross.

The year the Ampelmänn debuted, 1961, was also the year that the communist East German government erected the Berlin Wall to keep its citizens from fleeing to the West. When the wall came down in 1989, nearly every trace of the hated old order was swept away. By the mid-1990s even the street signs, traffic lights, and pedestrian lights bearing the friendly Ampelmännchen began to be phased out in favor of their humorless West German equivalents.

Had the reunification of Germany gone more smoothly, the little green and red men might well have disappeared. But as the years passed, what had initially seemed like a joining of East and West came to feel more like a swallowing of the East by the West. The former East Germans, or Ossis (Easterners), as they were nicknamed, felt like second-class citizens in the new Germany. They worried about losing their identity in what felt like a foreign country, and they resented being looked down upon by the Wessies, or “Westerners,” as backward and slow. The Ossis were glad to be rid of the old regime, but they chafed at the idea of losing even this most innocuous and cheery reminder of their old lives. They came to identify with the chubby little man in the silly hat as he was being pushed aside.

CAN’T KEEP A GOOD MANN DOWN

In 1996 Peglau banded together with fans of the Ampelmännchen to form a group called “Rescue the Ampelmännchen!” and began lobbying the Berlin government to leave the pedestrian lights alone. They had more than nostalgia on their side: the chubby Ampelmännchen gave off nearly twice as much light as their skinnier West German counterparts, making them easier to see.

Berlin officials soon realized that keeping the lights was good politics. The Ampelmännchen not only stayed up in old East Berlin, in time they became the standard for the entire city. Since then other German cities have adopted them as well.

MANN ON THE STREET

The Ampelmännchen also became pop-culture icons, thanks to a West German industrial designer named Markus Heckhausen, who first saw the lights during a trip to East Berlin in 1988, when Germany was still divided. “I loved them because they seemed like the only bright, humorous thing in a gray world. They were so happy and friendly,” he says.

After the wall came down, Heckhausen converted some discarded streetlights into decorative lamps. Those sold so well that he bought the rights to the character from Karl Peglau and put it on T-shirts, hats, key chains, pens, playing cards, shot glasses, coffee mugs, you name it—hundreds of products in all. Tourists have snapped up millions of the souvenirs every year and, in the process, have turned the Ampelmänn into as iconic a symbol of Berlin as the Eiffel Tower is for Paris and the Statue of Liberty is for New York. “People just love them, as I did when I first saw them,” Heckhausen says. “They are kind of naive and childlike. And fun.”