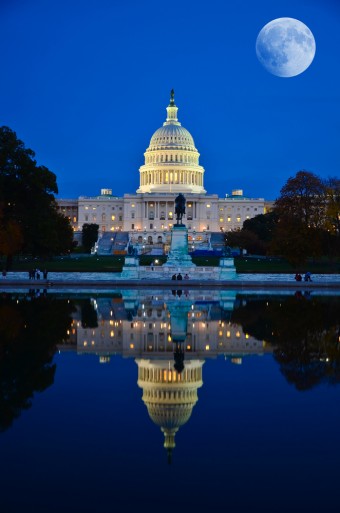 In its modern incarnation, the filibuster demands no personal and political sacrifice by an idealistic legislator who is willing to stand up for what he believes in (e.g., Mr. Smith Goes to Washington). Requiring neither speech, ideology or commitment, in today’s Senate if fewer than 60 senators are willing to first vote to stop debate on a bill (cloture), then one senator, alone, can just make a procedural motion that stops all voting on the bill. Rather than going through these motions, most often the bill is simply just not even brought to the floor, and no votes are ever taken (one senator from each party, known as a Whip, keeps track of how each member will vote on a bill before it is ever formally presented).

Therefore, while it should only take 51 votes (50 if the Vice-President voted to break a tie) to pass a bill or confirm a nominee in the U.S. Senate, in reality, because of the threat of a filibuster, in order to limit further debate, the majority must first obtain 60 votes for cloture on anything even remotely controversial. In today’s sharply divided Senate, that is essentially anything of importance to the country.

In the modern era (and through several Presidents), key positions in the administration, and dozens of judicial nominees, have waited months if not years to be confirmed, and necessary legislation often never makes it to the floor because of a threatened filibuster.

To protect minority rights and provide for the expression of views that would not otherwise be heard. One such example happened this year when Senator Rand Paul filibustered the nomination of John Brennan to become the Director of the Central Intelligence Agency.

In his former position as Deputy National Security Advisor, Mr. Brennan had responsibility for managing the administration’s covert drone war, which has killed around 2,000 people. Senator Paul was particularly troubled over the use of drones to assassinate Americans (classified as al-Qaeda leaders) overseas; during his nearly 13-hour filibuster, Senator Paul drew attention to the drone program, and may even have forced the administration to clearly state its policy on the use of drones, both overseas and at home. Sadly, this valid use of the filibuster is a rarity in today’s Senate.

It is important to remember that the filibuster is not included in the Constitution, and there is no indication the framers intended it to be part of the Senate’s rules. In fact, prior to 1806, the Senate had a method for cutting off debate by a simple majority vote with the previous question motion.

However, since it had never been used, at the suggestion of Vice President Aaron Burr, the previous question rule was discarded. From that day over 200 years ago until 1917, there was no rule that even allowed for any vote in the Senate to stop debate – thus allowing for a filibuster. However, few filibusters were waged prior to the latter half of the 19th century; and even then, it was nothing like contemporary practice.

Nonetheless, majorities soon found the filibuster to be a great irritant, and by 1917, even the President wanted a method for ending debate. The result of much compromise between a minority desirous of keeping some method of checking majority tyranny, a majority desperate to make an end run around a small group of Senate doves, and President will to use his bully pulpit, Rule 22 (cloture) was passed.

As originally designed, cloture required a supermajority of 2/3 of those present in order to cut off debate; yet, unlike today, for a number of years, many bills were passed in the Senate with narrow majorities. Although there is no single reason why more legislation could get through with fewer votes in the past, one theory holds that, back in the day, Senators built larger coalitions that, presumably, crossed party lines, and thus were able to avoid party-based filibusters.

Even though the vote requirement for cloture was reduced to 3/5 of the entire Senate (60 votes) in 1975, in the intervening years, the filibuster has been increasingly used to obstruct legislation. By the 21st century, the situation had become intolerable.

As noted by the Chairman of the Senate Rules Committee, Chuck Schumer, during hearings in 2010 on the filibuster, 400 bills that had been passed by the House, dozens of presidential appointments and 41 judicial nominations never even made it to the Senate floor for a vote. To put it another way, as demonstrated in a recent report by the Brennan Center for Justice, there were 52 filibusters in the 110th Congress (2007-2008); that was a 44% increase from the previous Congress. So what to do?

Some had advocated for the majority to exercise a full nuclear option, which would involve changing the Senate’s rules so that cloture (ending debate) could be invoked on any matter before the Senate (legislation or nomination) by a simple majority. Easier than it sounds, proponents of the nuclear option say that the Senate’s rules only require a majority vote to change them (meaning only 51 votes would be required to change the cloture threshold from 60 to 51).

Slightly cooler heads prevailed, and rather than completely eviscerate the filibuster, Senate Democrats (the majority) exercised a more limited nuclear option: with a vote of 52-48, now administrative appointments and judicial nominees to the district and circuit courts (but not the Supreme Court) could be confirmed with only a simple majority vote; however, legislation and nominations to the Supreme Court would still need 60 votes to invoke cloture, end debate and kill a filibuster.

Yet, it is still not easy for the majority party in the Senate to confirm nominations. According to Senate rules (those again?), even after the majority votes to end a filibuster on a nominee, “post-cloture debate time” may still be demanded by any Senator.

Recently, as Senate Democrats are moving forward with approving Presidential nominations, Senate Republicans have invoked their right to debate. Since for most nominees debate may last up to eight hours, the minority party has been able to harass the majority on its way to confirmation.

During the second week of December 2013, Republicans have insisted on having the Senate in session during all debate. As a result, and in order to confirm as many nominees as quickly as possible, Senate Majority Leader, Harry Reid, has been holding all night sessions, which he described as: “hard to imagine a more pointless exercise than spending an entire day waiting for a vote whose outcome we already know . . . “.

In an encouraging display of compromise and reasonableness, or perhaps they were all just tired, by the end of a 48-hour Senate session that week, Senate leaders agreed to cancel a scheduled all-night Saturday session and simply hold the next scheduled vote on Monday. It is anticipated that, the “final slate of pending nominations, most notably Janet Yellen as chairman of the Federal Reserve, could be taken care of with time to spare before the scheduled Christmas recess.”

Cease-Fire Declared in Senate Over Nominations

Democrats Strip GOP of Power to Block Many Obama Appointees