Can Lobsters Really Not Die of Old Age? 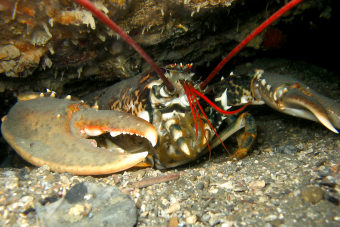 You’ll often hear it claimed that lobsters are biologically immortal. So is it true?  Not really, though this is partially an argument in semantics as you’ll soon see. (And while we’re on the topic of lobster myths, no: Lobsters do not mate for life. In fact, the male lobster pretty much gets it on with every female lobster that comes a knockin’. And they do almost literally line up and knock on the male’s door.)

So what’s the source of the staple of social media timelines that lobsters can’t die of old age? Cells make up all living creatures on Earth, from humans to lobsters. (Shocker, I know.) However, cell replication is limited based upon nucleotide sequences called telomeres which are found on the ends of chromosomes. In a nutshell, telomeres prevent the strands of DNA from coming undone and also prevent them from accidentally fusing with neighboring chromosomes.

The issue is that these end caps get shorter each time the cell divides owing to the fact that the enzymes that duplicate the DNA, with a little help from short pieces of RNA, cannot do so all the way to the end of a chromosome.  So something gets cut off every time a replication occurs. Telomeres ensures that what is cutoff isn’t critical information. But the result of this shortening each time is that telomeres eventually become too short to provide an adequate buffer. For reference, human cells can only be replicated around forty to seventy times before the telomeres become too short. This leads to the cell no longer being able to correctly replicate and to cell death.

Lobster cells work a little differently. A lobster’s body produces quantities of the enzyme telomerase even into adulthood. While humans and other vertebrates also produce telomerase, our bodies only (usually) produce it while in embryonic form. What does telomerase do? It continuously repairs the cells’ telomeres, keeping it from becoming too short. The result is that the DNA in the cells can continue to replicate indefinitely- hence why it is often claimed that lobsters are technically “immortal.” 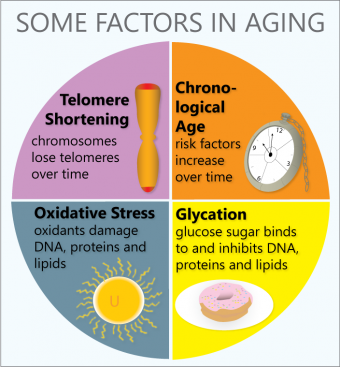 Image Courtesy of the University of Utah Health Sciences

While partially an argument in semantics, the problem here is that when most hear “biologically immortal,” they think it means that if a lobster isn’t killed by some predator or the like, lives in a suitable environment, and has an adequate supply of nutrients to supply their biological needs, the lobster never gets old and can live forever. But the truth is that there are many factors that go into aging (a number of which aren’t well understood), not just a cell’s ability to replicate itself. DNA damage happens over time regardless of telomere length. While much of this gets automatically repaired via various mechanisms, genetic mutations do occasionally occur from things such as oxidative stress, potentially resulting in cellular deterioration and malfunction.

With regards to the lobster, evidence at hand appears to indicate they do, in fact, die of what we’d colloquially call “old age” eventually.  How? Lots of ways, similar to humans. For example, beyond potential environmental damage to their cells causing issues, we know definitively that how the lobster grows and the metabolic energy required to do it greatly affects their lifespan. Humans grow through childhood and adolescence until they reach a certain size after which they usually do not grow any bigger (at least not vertically…) A lobster’s body, however, never stops growing.

Lobsters grow in size during a process called molting, in which they shed their hard exoskeleton, from claws to tail, before growing a new one around a bigger body. A young lobster may molt several dozen times before its first birthday as it rapidly grows. The process slows to about once a year by around age seven and then once every two or three years after that. The largest lobster ever caught weighed in at a whopping forty-four pounds. For reference, a typical lobster you’ll find in the store or restaurant usually rings in at about 1-2 pounds and is around 5-10 years old.

The bigger a lobster, (usually) the greater its age. However, molting takes more and more energy as a lobster increases in size and the amount of effort it takes for even a 30-50 year old lobster to molt kills between 10% and 15% of the lobsters every year.

But just because lobsters can potentially continue to grow and molt up until their death, that does not mean they always do so, even if they have sufficient food available and ideal environmental conditions. Elderly lobsters have been observed to stop molting altogether, with the theory being that their bodies simply no longer have the capacity to do so, likely via a lack of the needed metabolic energy.

Much like an elderly human is often more susceptible to things like pneumonia for various age related reasons, this is a major problem for the lobsters as it often leads to shell disease, a bacterial infection in the shell that can form scar tissue between the lobster and the shell. If they are able to molt again later, they potentially have the problem of scar tissue binding the inner body and the shell which can cause the lobster to become stuck and die. Shell disease can also lead to other problems such as shell rotting, with the net effect being the same- the lobster that no longer molts dies.

So how long do lobsters actually live before dying of these types of so-called natural causes? This isn’t clear at all. Estimating how old the largest lobsters ever found are comes with a huge margin of error. As Biologist Carl Wilson of the Maine Department of Marine Resources explains, “The problem with lobsters is when they molt, they molt their entire exoskeleton, including their digestive tract and gastric mill and the like, so there are no hard parts that are left,” leaving little in the way of accurately measurable physical markers. Even judging by size isn’t fool proof owing to a variety of environmental factors greatly influencing their rate of growth. But for reference, using several different means of trying to judge the age of lobsters, the overarching average lifespan in the wild of the various types of lobsters out there is thought to be about thirty years for males and around fifty or sixty years for females.

So if you want to use as the definition of “biologically immortal”- “no known point in which cells will stop replicating barring outside influence,” then lobster are possibly biologically immortal. But even then, it should be noted that there has never been a definitive study (to date) demonstrating that lobsters producing telomerase throughout their adulthood actually increases their natural lifespan. There is so much more that goes into real-life biological immortality than just if the cells have a point in which they will definitely stop being able to replicate, and we humans (unfortunately for all of us alive today) don’t yet fully understand all the factors at play nor exactly how much telomeres really plays a causative role in aging. If body and cellular aging only had to do with telomeres, few humans would be colloquially labeled to die of “old age” before around the age of 120.

In the end, even with ample resources and in an optimal environment, most lobsters’ bodies seem to cease to be able to sustain themselves at around 1/3 to 2/3 the age an average human lives before we succumb to our own set of complications due to age related factors. So while it is a semantic argument, it seems a bit of a stretch to call lobsters biologically immortal just because their cells don’t see telomeres shortening like many other animals. Humans have shorter telomeres than mice, but mice die of “old age” after only a few years. There is even a species of bird (Oceanodroma leucorhoa) that actually has its telomeres increase in length as they age, but they, too, are not immortal. Why and how animals age, it turns out, just like most things in life, resists such simplistic explanations.