November 9, 2016 Melissa
Gary M. asks: When did people start wearing black to show they were mourning a death? 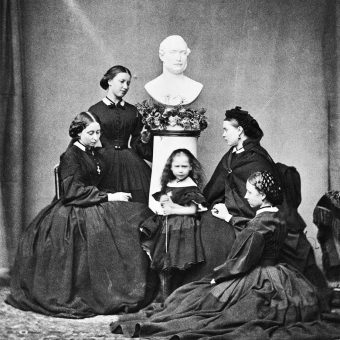 Funeral rituals have been practiced since long before the dawn of civilization. For instance, Neanderthals are known to have intentionally buried their dead as far back as around 130,000 years ago.  (And if you’re wondering, see What Ever Happened to the Neanderthals?). As for humans, we’ve been burying each other for around the last 100,000 years.

Wearing special clothing to mark the funeral event and the period of mourning afterward, however, seems to be a much more recent (although still ancient) tradition. One of the oldest references to such appears in the Bible in the form of Jacob wearing sackcloth, an uncomfortable and plain-looking fabric made from coarse goat hair:

As for the first to wear intentionally dark clothing while in mourning, at least as far as surviving records indicate, that seems to start with the Ancient Romans, whose civilization dates to the 753 BCE. They wore a special, dark wool toga called a toga pulla (as opposed to the more well-known, white toga virillis) in times of mourning, or sometimes in protest, such as when protesting a senatorial decision.

More familiar types of mourning attire in the West began to appear in Europe during the Middle Ages. A society with a strict hierarchy, its fashion reflected its social stratification, and during the funeral and period of mourning, only the most high-ranking could afford to wear expensive black or white crepe, and these were adorned with long trains and hoods; others showed their bereavement by wearing far plainer dark clothing. It was also during this period that widows began to wear veils with their “widow’s weeds.” 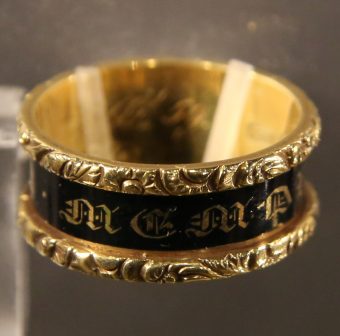 The social revolutions of the 18th century, in which the merchant classes of Europe and America continued to aspire to a higher standing within their communities, witnessed an expansion of those who invested the time and significant money in mourning dress. For some, this required the purchasing of a whole new black wardrobe. The most affluent would top the rest, opting for wearing mourning jewelry which including things like brooches, rings, necklaces, etc. often set with jet. Thus, by the middle of the 19th Century when Britain’s Prince Albert died (1861) and Queen Victorian adopted her now-iconic black widow’s weeds made of heavy crape, the remainder of society was eager to follow, with the financial ability to do so also functioning as something of a very visible status symbol; in fact, many of her subjects continued to wear mourning clothing long past the regulated period out of respect for their monarch, and no doubt to get a little more mileage out of the mourning garb that was otherwise not appropriate to wear in public.

It was also during the Victorian era that the duration of time to wear mourning clothing became more or less established in the West. While not universally followed, particularly sometimes ignored by the less affluent by necessity, a widow was expected to observe a period of “full mourning” for a year after death, and this included wearing only dull clothing and a veil over her face when she left the house, as well as to avoid “balls and frivolous events.” For the following year, she would be in “half mourning,” during which she could wear colors as bright as mauve and violet, as well as a bit of normal jewelry.

Parents and children of the deceased were expected to wear dull, dark mourning clothes for two years, although the heavy crepe was only worn for one.

Not as much was expected of widowers, and they wore a black suit and gloves for only a year. Siblings only had to endure the heaviest mourning clothing for six months, after which they were expected to wear only gray, white or black. After the various mourning periods ended, proper etiquette also indicated that movement to brighter shades was to occur gradually, although there were no hard rules on this front.

Victorian norms that reflected a Protestant tradition were not necessarily followed by Catholics in the 19th century, and the latter’s rules were a bit more strict. For example, Catholic widows and widowers were expected to wear only black during the period of what they called “deep mourning,” which lasted for one year.

For their half mourning (another six months), the color remained severe for widows, and was either black with a bit of white, or white with a bit of black. It was not until “light mourning” (another six months) that Catholic widows were allowed to incorporate the muted colors of gray, lavender and mauve; Catholic widowers skipped half mourning, and went straight to six months of light mourning after deep mourning.

Catholic children (under age 12) were allowed to wear gray in the winter and white in the summer, and they, like older children of deceased parents, were only expected to endure six months of heavy mourning, six of half and three of light.

While this may all seem overly restrictive, it did at least function as a way for people to broadcast without words they were in mourning, with those around knowing at a glance they should be sympathetic to the individual and perhaps give them a little more leeway than they might otherwise do in interactions with said person.

On the other hand, the fact that adhering to the wardrobe aspects of these rules tended to cost a lot of money if one didn’t already have appropriate mourning garb from a previous mourning session meant that impoverished families once again got the short end of the stick, as illustrated in The Wonderful Wizard of Oz (originally published in 1900) in which Dorothy laments,

My greatest wish now… is to get back to Kansas, for Aunt Em will surely think something dreadful has happened to me, and that will make her put on mourning; and unless the crops are better this year than they were last, I am sure Uncle Henry cannot afford it.

Over time, these rules have, obviously, relaxed considerably, with the death knell for such strict practices coming thanks to WWI when the number in mourning due to a killed loved one encompassed a significant percentage of the population. But even as late as the 1960s, certain remnants of the old traditions were still practiced by many. For example, avoiding balls, public dinner parties and the attention of potential partners for at least a year was the norm, and although certain activities, like sports, were allowed, the bereaved were expected to wear somber colors.

Today, while the rules of etiquette have lessened drastically regarding what is appropriate for mourning (pretty much anything), when attending a funeral, certain attire, generally black or otherwise darkly colored, is still expected in the West unless those organizing the funeral request that you dress in a particular manner, such as the deceased’s favorite color or if the deceased requested the event should be festive in nature.