Can a Vice Presidential Candidate or the Speaker of the House Really Be Elected President Instead of the Main, “Winning” Candidates?

November 7, 2016 Matt Blitz
Michelle S. asks: Is it actually possible for a vice president candidate to be elected president like on VEEP or were they just making that up? 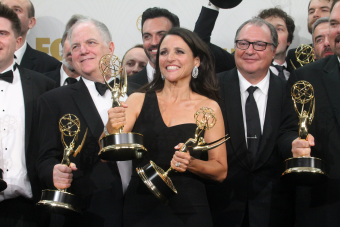 The season five finale of HBO’s Emmy-award winning comedy VEEP sure seemed like a Hollywood fantasy. Through a series of wacky situations, hilarious gaffes and complicated procedures, an obscure Vice-Presidential candidate was elected by the incumbent Vice-President to be the President of United States. Seems far-fetched, right? Well, no, not at all. Sure, a lot of details were added for dramatic effect and comedy’s sake, but in terms of how congressional procedures and rules would play out if presented with such a scenario, the show was quite accurate. There is, in fact, an actual chance that one of the Vice-Presidential candidates in a given election will be elected POTUS. Not only that, it is also possible that the Speaker of House could become the President of the United States instead. Here’s how.

Of the 538 electoral votes up for grabs, a candidate must get (or exceed) 270 electoral votes in order to get the presidency. So, if split in half between two candidates, that’s 269 per and one vote short of the magic number. Of course, it doesn’t necessarily work this way. There could be a third party candidate or even a fourth candidate that could siphon votes from the two main ones. In the 1824 election, this is exactly what happened. Andrew Jackson won the popular vote (the first time it had ever been counted- initially certain states didn’t even select their electors based on their populace’ votes) but was only able to get 99 electoral votes – which was 32 short of the majority (there were 131 electoral votes up for grabs at that time). However, there were four candidates running for president (oddly, all of them considered themselves from the same political party – the Democratic-Republicans) that received electoral votes that year: John Quincy Adams got 85, William Crawford got 41 and Henry Clay had 37. There have been other elections where third-party candidates have received electoral votes (for example, 1860, 1912 and 1968), but 1824 is the only one to date that an electoral tie was produced due to third and fourth candidates.

Now, if no candidate gets an electoral majority – be it with a 269 vote tie or other candidates taking votes – the election gets sent to the House of Representatives, where each state delegation gets one vote. So, no matter if it’s California with their 53 representatives or Rhode Island with their 2 representatives, it is one vote per state. With 50 states, it is possible that the House of Representatives could also tie in their voting, assuming there are no abstentions (or “faithless electors”) and the House isn’t heavily weighted towards one party or the other. In addition, in accordance with the 12th amendment, only the top three vote-getters are considered in the House. And, to make matters a bit more confusing, it wouldn’t be the House that was in office when the presidential election first started in November, but the one that had been elected. Because the vote would not officially happen until January when the new House is sworn in, the dynamics of the House could change – meaning there could be a swing in which party controls it.

When the 1824 election got sent to the House, shadiness ensued. Since Henry Clay finished in fourth place in the electoral vote race, he was disqualified from the House vote. However, that didn’t stop him from having a significant influence. Officially, Clay made it known that he agreed with Adams’ nationalist agenda and hated Jackson. So, he told his supporters in the House to throw their weight behind electing Adams President. When the vote came down in February 1825, Adams won the majority of the states with 13, while Jackson got 7 and Crawford got 4. This shocked Jackson and his supporters, considering he had won the popular vote and the electoral college.

To make matters even more hard to stomach for Jackson, Adams quickly named Clay his Secretary of State, fanning the flames of conspiracy that this was a corrupt bargain. Livid, Jackson responded with harsh words,

[T]he Judas of the West has closed the contract and will receive the thirty pieces of silver . . . Was there ever witnessed such a bare faced corruption in any country before?

However, as previously stated, it is possible for the House’s voting to end in the tie. If that is the case, then the Vice-President would become President of the United States. But there’s a rub: It wouldn’t be the incumbent VP, but the one that the Senate has elected. In the 1800 election, Thomas Jefferson and Aaron Burr tied in the electoral college for the presidency (at the time the second-place vote getter would be Vice President- there was not a separate vote for that office), even though the intention when campaigning was for Jefferson to be president and Burr to be his VP. A series of votes and threats of militia marching on the capital resulted in Jefferson ultimately getting elected president and Burr his VP. As a result of this mess, four years later, the 12th amendment was passed and called for separate voting designation for each position. It also gave the Senate the power to elect the Vice-President in a separate election, which means that if the House does end up electing a president, the Senate can elect a vice-president that’s from a different party.

But, if the House is deadlocked in its selection of President, the Senate’s choice for VP would become President (of course, this is highly contingent of what party controls the Senate after the election).

So, what happens if the Senate is also unable to come to a majority vote? Well, in theory, the incumbent VP is supposed to have the tie-breaking event due to being President of the Senate. With each state voting, that would be 26 to 25 in favor of whoever the VP picks. Now, a state (or several) could abstain from voting, which would completely alter the outcome. If an abstaining state prevents the VP vote to be the deciding one, then the presidency goes to the Speaker of the House.

To attempt to make that jumble of a mess a little more clear, here’s a potential scenario for something like this happening with the 2016 election. Let’s say Clinton and Trump are tied with 269 electoral votes each. Now the decision would go to the House of Representatives in January to be determined by the recently-elected Congress. If that ends up in a tie, the Senate would choose between the VP candidates Tim Kaine and Mike Pence. Now, if a state ends up abstaining and turns incumbent VP Joe Biden’s vote into the tying one instead of the tie-breaker, it makes the current Speaker of the House President of the United of States. And that is Paul Ryan.

It is also possible that both the House and Senate elect their respective offices, but they end up being from different parties. This means, for example, you could get a Clinton-Pence or a Trump-Kaine White House.