How Do We Pee and Why Can’t We Do It Any Time?

November 10, 2015 Melissa
Erica H. asks: How do we pee in terms of the nuts and bolts of it? Why can we only pee sometimes and not just anytime there is liquid in our bladders? What’s the trigger and how exactly is the pee expelled once the floodgates do open? Is it just gravity or do our stomach muscles squeeze our bladders? Inquiring minds want to know! 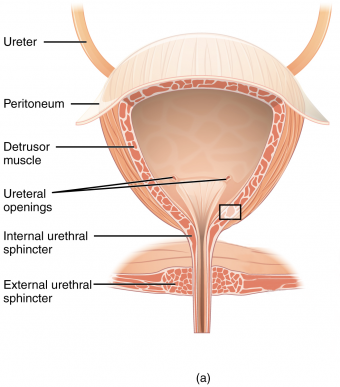 An average healthy adult responds to nature’s call anywhere between 4 and 10 times each day. The need to take a leak begins when pressure in the bladder rises, stretching the bladder wall which is made up of bands of smooth muscle (detrusor) that are filled with beta adrenergic receptors that send and receive messages between the muscle’s cells and the nervous system.

While the bladder is initially stretching as it fills via the ureters propelling urine from the kidneys to your bladder, messages are sent from the sympathetic nervous system (the fight or flight part of the autonomic nervous system) via the hypogastric nerve to the detrusor muscles telling them to suppress the urge to contract. At this point, you experience no urge to pee and even if you wanted to, (unless you’re experiencing some sort of renal system issue) you typically wouldn’t be able to without doing something to squeeze the bladder manually (pushing on it directly, using your abdominal muscles, etc.). This is due to an internal urethral sphincter keeping things closed tight along with the lack of squeezing by the detrusor, both controlled by your autonomic nervous system.

As the urine in the bladder reaches approximately one quarter to half full, however, the stretch receptors in the detrusor as well as other receptors in and around the opening to the urethra (the tube that runs from the bladder to the outside world) signal back to the Sacral region of the spinal cord triggering the micturition reflex, as well as letting your brain (and you) know it’s time to pee.

The parasympathetic system kicks in and signals the detrusor muscle to now alternate between contracting and relaxing, in a process known as the micturition wave. If you choose to simply hold it, your brain sends impulses down the spinal cord inhibiting the micturition reflex, particularly making sure your external urethral sphincter is ignoring a secondary action of the micturition reflex which is telling your voluntary external sphincter it should go ahead and relax and let the urine flow. These impulses from the brain, thus, make sure this sphincter stays clamped shut until you decide it’s time to pee.

However, the longer you continue to hold it, the less effective this is and the more intense and frequent this micturition wave will be, until it reaches a level where the detrusor contracts for a long time. This is the point when you really, really need to go. But if you’re on a road trip and your husband just refuses to stop and you don’t have some form of travel urinal, you can still generally (until things become critical) tell your external urethral sphincter it’s really not a good time and consciously make sure it stays closed. (Though this system will continue to remind you on occasion that your bladder can only expand so much.)

As alluded to, all the time you’re searching for a suitable spot, your brain is working with other muscles helping to prevent an accident. An internal automatically controlled sphincter surrounds the neck of the bladder (where it meets the urethra), and the voluntarily controlled muscles of your pelvic floor form the external sphincter that supports the muscles of the urethra itself. Working together, these help you hold it in if you’re so inclined.

Also, if your renal system is working properly, a sort of 1-way valve at each of the two connection points of the ureters and the bladder makes sure urine isn’t squeezed back up the ureters into your kidneys (via the detrusor and ureter muscles creating a 1-2 cm compression point, squeezing that section of your ureters shut at appropriate times).

When you are finally ready to relieve yourself, if your detrusor isn’t already bearing down, you’ll typically increase the pressure in your bladder via your abdominal muscles. This triggers an unsuppressed micturition reflex, at which point your automatically controlled internal sphincter is relaxed, as is the voluntary external urethral sphincter (now that the higher centers of your brain aren’t telling it to stay squeezed shut), and your detrusor muscles give a good, long squeeze. The result is the majority of the contents of your bladder being squeezed out, with typically around 50 or so milliliters remaining. Ah, sweet relief.