What Exactly Does Landing on Free Parking Do in a Game of Monopoly? (And Other Ways You’ve Been Playing Monopoly Wrong That Make It Take Longer)

November 16, 2016 Karl Smallwood
Richard G. asks: I’ve seen so many different rules for it, but what’s actually supposed to happen when you land on free parking in Monopoly? 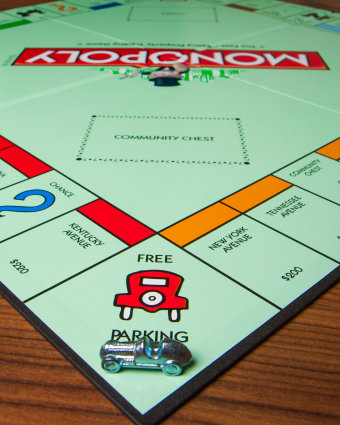 Few board games have the ability to cause arguments like Monopoly, an unsurprising fact given the object of the game it was based on (see: Who Invented Monopoly?) was to send your opponent to the poor house while you bask in the pleasures of immense wealth and prosperity. In the eight decades or so the game has existed, the rules of Monopoly haven’t really changed all that much, but because everyone “knows” how to play, how people actually play the game has slowly diverged from what the actual rule book, which nobody ever bothers to read, says. In anticipation of various family get-togethers coming up this holiday season, in which you’ll no doubt be subjected to a game of Monopoly at some point, in this article, we’re going to correct the various ways you’ve probably been playing Monopoly wrong your whole life.

To begin with, according to the copy of the rules slipped into every copy of Monopoly ever sold, Free Parking does nothing. It is quite simply a free space for your tiny car or hotel owning feline avatar to rest while they count their rent money.

Despite this rule being clearly displayed in every box of Monopoly, Hasbro (the game’s publisher) has stated they receive hundreds of calls from customers asking about it every year. (As for us, in the seven years this site has existed, we’ve only been asked this question three times to date.)

This, amongst other things, encouraged Hasbro to commission a study of customers during which they found that an astonishing 68% of respondents admitted that they’d never actually read the game’s rules. In addition, Hasbro also found that around 30% of players simply made up their own rules while playing. This actually prompted Hasbro to include these so-called “house rules” in later games as an option, one of the most popular of which is that every tax dollar and fine goes into the centre of the board which is then given to whatever player lands on Free Parking.

This misconception concerning what happens when you land on Free Parking isn’t the only way you’re probably not playing Monopoly by the book. And some of the actual rules speed up the game considerably, and ensures you often have something to do even when it’s not your turn.

To begin with, nowhere in the rule book does it say you have to wait until you’ve made it around the board once before you can start buying properties. That’s just something just about everyone thinks is a rule, which needlessly slows down the game a bit.

Much more importantly, anytime a player lands on an available property and chooses not to buy it, every player, including the player who landed on the property, is supposed to be able to place a bid on the property if they so choose. Don’t believe me?  Here’s the relevant excerpt from the official rules:

Whenever you land on an unowned property you may buy that property from the Bank at its printed price. You receive the Title Deed card showing ownership; place it face up in front of you. If you do not wish to buy the property, the Banker sells it at auction to the highest bidder. The buyer pays the Bank the amount of the bid in cash and receives the Title Deed card for that property. Any player, including the one who declined the option to buy it at the printed price, may bid. Bidding may start at any price.

This rule not only adds considerable strategy to property buying, rather than just relying on dumb luck of where you land and going by the stated purchase prices, but also drastically speeds up game play as properties are snapped up very quickly as players traverse around the board.

Another rule that potentially speeds up the game over what people normally do is when you bankrupt a player (i.e. if the debt a player owes you exceeds their ability to pay), you’re supposed to get all that player’s remaining assets minus that they’re required to first sell back any buildings they have to the bank, though you get the money for this.

In actual practice, what many do when playing is turn those properties over to the bank to be available for purchase by others if they happen to land on them (again with people ignoring the auction rule). This latter is only supposed to happen if the thing that causes the bankruptcy is a result of debt to the bank. And even then, rather than requiring another player lands on the property again to kick off purchasing or an auction, all of the properties are supposed to be immediately auctioned upon said player going bankrupt.

Next up, that rule where if you land on Go! you collect $400 instead of the normal $200 for passing?  Ya, that’s not a thing in the official rules, it’s just something people do.

You also aren’t supposed to be able to give loans to other players. “Money can be loaned to a player only by the Bank and then only by mortgaging property. No player may borrow from or lend money to another player.” Beyond potentially making the game last longer when such loans are given by other players, this also makes the game significantly less enjoyable as it tends to cause fights when a player refuses to loan money or the like.

Another way in which many play the game incorrectly lies in what happens when a person is in jail. The official rules state “Even though you are in Jail, you may buy and sell property, buy and sell houses and hotels and collect rents.” Yep, contrary to what many do when playing, being in jail in the game of Monopoly doesn’t actually stop you from making any money and is of no real hindrance to a rich enough player just like real life. In fact, a popular tactic amongst professional Monopoly players (which are a thing that exist) is to try whenever possible to wind up in jail to basically get two free turns where they run no risk of landing on another player’s property.

Speaking of which, the rules also stipulate that there are a finite number of houses (32) and hotels (12) in the game and that when they run out, that’s it. So all those times you’ve lamented having to use random little objects from around your house to make up for the game makers not including enough hotels and houses, you were fundamentally changing the game by breaking the rules and buying more hotels and houses.

You may at this point be wondering what happens when houses or hotels become scarce or run out. In this case the rules state, “If there are a limited number of houses and hotels available and two or more players wish to buy more than the Bank has, the houses or hotels must be sold at auction to the highest bidder.” So as the precious building resources run low, they actually potentially get a lot more expensive, adding extra strategy to the game.

And once every house and hotel is gone, if you want to buy such a building, you have to wait until some player returns some of the houses or hotels to the bank, whether via going bankrupt or selling them back at half the original cost. This latter is also a requirement if one player wishes to auction off or otherwise sell any of their properties to another player- at least by the official rules you cannot sell said property until you’ve gotten rid of all of the buildings on it, contrary to what many do when playing.

Again, savvy players can take advantage of this rule by quickly snapping up as many of the houses and hotels as possible before anyone else can buy them, such as initially putting 4 houses on every cheap property they own, inexpensively kneecapping other players in the most beautifully frustrating way possible.

Another little known rule that occasionally gets players accused of cheating after the fact, but is just part of the official rules, is that if you land on someone else’s property, “The owner may not collect the rent if he/she fails to ask for it before the second player following throws the dice…” That’s right, if the owner of said property fails to notice you’re squatting on it fast enough, they can’t demand rent later.

This is similar to the game Scrabble where it’s entirely legal to play a totally made-up word, with the only risk being losing a turn if your opponent challenges it and your ruse is discovered. (Incidentally, if you’re wondering about the origin of the game, see: The Great Depression and Scrabble.)  You might think doing this is a high risk venture, but since 1976 in many regions of the world (depending on what company actually produced the game in your region) wrongly challenging a valid word results in the challenger losing their next turn or in some regions losing 5 points (a rule many a-novice Scrabble player is ignorant of). So if your made up word sounds believable enough, you might just get away with it.

So in the end, over the near century the game of Monopoly has existed, the official rules have gradually become ignored, presumably owing to the fact that everyone “knows” how to play Monopoly and teaches others to play based on their knowledge, with no one in many decades actually bothering to read the rule book. The result is that certain of the common “house rules” ultimately make the game significantly more time-consuming and more boring when it’s not your turn. So when you get together with your family over the holiday season, to save yourself a lot of time and grief, maybe go full-Melvin and teach people the right way to play the game.