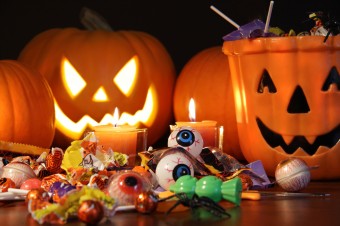 Remember your mom sorting through your Halloween candy as a kid, looking for signs of ‘tainted’ candy laced with poison, needles or razor blades?  It turns out, unless she was just using it as an excuse to steal the good candy before you got it, she was wasting her time.  You are more likely to get attacked by a samurai sword wielding bear while trick or treating than be poisoned by a stranger.  Further, it’s more likely that your Halloween candy will be poisoned or otherwise tampered with by one of your parents or family members, than a stranger.  Think about that while your mom is “checking out” your candy before letting you eat it. 😉

So why all the worry? Because the news media needs something to talk about and there’s nothing better for ratings than saying something like “Is your child’s Halloween candy poisoned?  Find out the deadly truth at 11!”

Further, while many children die directly after Halloween from non-candy related things (after all, people die every day), if there isn’t an apparent cause the week following Halloween, many-a-sensationalized story gets widely publicized with poisoned Halloween candy generally being blamed. (There are numerous instances of this happening.) This isn’t all bad in theory.  I mean, if there is even a chance that some child’s death was poisoned-candy related, the police (rightly) encourage the news media to tell parents in the area to get rid of their children’s Halloween candy because it might be poisoned.

When it turns out the death had nothing to do with Halloween candy, most media outlets tend to have moved on from Halloween stories, so either don’t report a retraction or don’t make it the headline like when they claimed the death was from candy.  Thus, the perception that poisoned Halloween candy is a rampant problem embeds itself in the popular psyche, going all the way back to at least 1970 when the New York Times reported “Halloween goodies that children collect this weekend… may bring them more horror than happiness,” which proceeded to tell parents all about how the candy could potentially be tampered with, even though there had never been an instance of this actually happening at the time.

So what about more recently?  According to the author of Halloween Sadism: The Evidence,  professor of sociology Joel Best from the University of Delaware who’s been studying this since 1985, he hasn’t yet been able to find one single instance of a child dying as a result of candy given them by a stranger on Halloween.

Certainly, such reports pop up every now and again (since 1958, he’s found about 78 such instances, including being connected to 5 deaths), but they were all debunked once the matter was investigated by police in each case, and most of them were simple hoaxes.  For instance, one child, Best says, “brought a half-eaten candy bar to his parents and said, ‘I think there’s ant poison on this.’ They had it checked and, sure enough, there was ant poison on it. Of course, the youngster had applied the poison himself.”

If you were paying close attention, you perhaps notice we said “dying as a result of candy given them by a stranger”.  It has happened once before that someone poisoned candy and gave it out to children with one child dying.

In 1974, eight-year-old Timothy O’Bryan of Texas died after eating a Pixy Stix laced with cyanide after trick-or-treating. Clearly trick or treating is unsafe now, right?  I mean, he trick or treated, then died from candy someone gave him. Case closed.

Except, it wasn’t candy a stranger gave him.  O’Bryan’s dad, Ronald, was trying to kill his kids, so put the cyanide laced candy in their bags.

The senior O’Bryan was about $100K in debt and close to having his car repoed.  His solution?  Suddenly take out about $60,000 worth of life insurance policies on his two children, then given them both the poison candy to try to collect on the policies. What could go wrong?  I mean, there’s nothing at all suspicious there.

Needless to say, the police had him as prime suspect number one as soon as they learned these details. After the investigation and trial, the dad was convicted of murdering his son.  His daughter survived the ordeal thanks to the fact that she simply didn’t eat hers.  Timothy wasn’t so lucky as Ronald had made sure he ate the tainted candy just before tucking him into bed.

Now, this wasn’t quite the end of it.  In order to divert suspicion from himself, O’Bryan had also slipped the poisoned candy in a few other children’s Halloween bags without them knowing. (It’s thought four others received the poisoned Pixie Stix), presumably hoping that if several children died, it wouldn’t look nearly as fishy.

Like his daughter, the other children also didn’t eat their Pixy Stix.  Upon investigation, none of the kids could remember any place they went giving out Pixie Stix, but did have contact with O’Bryan, so the evidence further pointed to him being the poisoner.

Needless to say, being a resident of Texas, where the state policy for any extreme crime is essentially, “Kill ’em all and let God sort ’em out”, despite the fact that all the evidence against him was circumstantial- though very compelling- O’Bryan was executed a decade later via lethal injection: the poisoner was poisoned.

Before that, in 1970, there was a case of a family that tampered with candy after a child died, to cover for a family member. The 5-year-old in question was a Detroit boy who ate a large amount of heroin his uncle had hidden. The boy died four days later.  The media at the time, of course, reported it was a case of Halloween candy poisoning.  In the media’s defense, in an attempt to divert attention away from the uncle, the family had sprinkled some heroin on some of the child’s Halloween candy and claimed that’s how the boy wound up ingesting the drug.  Upon investigation, the truth came out.

As far as other illegal substances go, in 2000, kids in a San Francisco neighborhood got a trick mixed in with their treats when they found Snickers candy bar wrappers stuffed with marijuana. Needless to say, depending on their age, I’m guessing some of the kids weren’t upset about this. 😉

But was this intentional?  Police traced the pot to a homeowner who was confounded by the accusations. It turns out the man worked in the “dead letter office” at a local postal facility, and when he found a bag of Snickers in a lost package, he brought them home to give out as treats. He hadn’t realized that someone had gone to a lot of trouble to put pot in the packages and reseal them in an attempt at smuggling pot through the mail.

So as far as the actual non-hoax instances of poisoned candy given out on Halloween, that mostly sums it up. We have one instance of someone actually doing this, though mostly just trying to kill his own kids;  one accidental giveaway of some pot; and one kid who simply ate a stash of his uncle’s heroin.

So that’s poisoning.  What about razors and needles? There are verified reports of sharp objects being placed in random trick-or-treaters’ candy, although these incidents are exceptionally rare (under 100, even including the hoaxes and pranks).

In nearly all of these cases, the sharp objects were found to have been placed in the food item by a relative or friend, usually as a prank.  From the poisoning and this, it would appear kids should be fearing what their families and friends are doing to their candy more than strangers on Halloween. 😉

In fact, despite the fact that this has been reported as a widespread problem since the late 1960s, the first known confirmed case of a person intentionally giving out candy with sharp objects embedded to random children didn’t happen until the year 2000.

49 year old James Joseph Smith did stick needles into Snickers candy bars as a prank and give them out to kids. While several children bit into the candy, the only injury was to a teenager who was pricked by one of the needles, but did not require any medical attention. Smith was charged with “adulterating a substance with intent to cause death, harm or illness”.

In another non-family related poking- in 2008, candy from a Florida dollar store was found to have metal shavings and metal blades embedded in it. An investigation revealed that the candy (Pokémon Valentine’s Day lollipops) was manufactured in China and the foreign objects believed to have gotten into the candy at the factory accidentally.

So while the instances of both the poisoning and embedded needles are not zero, they are virtually zero when you consider the many millions of kids that have trick or treated since the early 20th century.  And if you want to include guising and souling, we can go back several hundred more years without a confirmed case of poisoning or stranger-related embedding of sharp objects in the given food item. So- faith in humanity restored.

In the end, there has only been one death as a result of either of these things and a stranger wasn’t involved.  On the flip-side, statistically- and not surprisingly- children are four times more likely to be struck by a car on Halloween than any other day of the year.  Yet another instance where we humans tend to obsessively worry about extremely unlikely things, while conveniently ignoring the fact that for most of us the most dangerous thing we do in our lives, we do just about every day without worrying about it at all- ride in automobiles or on bikes and cross or walk along streets on foot.  The human brain is a funny thing. 🙂