The Silver Lining of the Worst Movie Ever Made 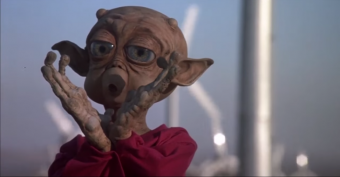 Product placement is a subtle art and when it’s done well, a few seconds of footage can instantly raise the profile of a given brand. Perhaps the best known example of this is the use of Reece’s Pieces in E.T., which saw a 65% boost in sales almost overnight. This makes it kind of fitting that arguably the worst example of product placement in a movie appeared in a shameless rip-off of E.T. called Mac and Me. (Even the title was taken from E.T., as the working title for E.T. had once been E.T. and Me.)

Released in 1988, six years after E.T., to a chorus of zero and one star reviews, Mac and Me has become somewhat infamous in film circles for being one of the single worst movies ever made. (Despite the editor of this article having extremely fond recollections of the film as a child… I see now that this must be like Knight Rider; if you loved that show as a kid, do yourself a favour and don’t try to re-watch it as an adult…)

While critics of the time panned almost every aspect of the Mac and Me, the most common complaint amongst the sea of bile directed towards this cinematic monstrosity was the ludicrous amount of painfully obvious product placement it contained. Particular attention was drawn to the inexplicable amount of screen-time dedicated to both Coca-Cola and McDonald’s, which are prominently featured in almost every key scene in the entire movie.

For those who’ve not seen this cinematic classic, as noted, the film’s “plot” is an unabashed knock-off of E.T.’s, focusing on a stranded alien called MAC (which is an acronym for Mysterious Alien Creature, and totally “not” a ham-fisted allusion to anything to do with McDonald’s…) who befriends a wheelchair bound young man called Eric Cruise while trying to reunite itself with its family. If that wasn’t on the nose enough, the alien is also being pursued by a shady government agency. The two films even had a near identical budget of $13 million for Mac and Me vs. $10 million for E.T. (When adjusting for inflation for the 1988 Mac and Me and the 1982 E.T., that comes out to $26 million and $25 million respectively today.)

This brings us to the product placement. For starters, one of the trailers for the film started with a direct message from Ronald McDonald who is shown reading a copy of the script which is the same color scheme as his outfit. Ronald also featured heavily in commercials and posters for the film, in some cases only having his billing preceded by the logo for the company that produced the film.

Ronald also briefly appears in the film’s most infamous scene, which features an impromptu almost 10 minute long choreographed breakdance featuring dozens of dancers inside and around a McDonald’s restaurant that is never adequately explained. This continues even as the plot unfolds around the dancers who are oblivious to the government stooges chasing a boy and his alien friend disguised in a teddy bear outfit. But we’re not done yet- as if having about 10% of the film’s runtime spent inside a McDonald’s full of people exuberantly dancing wasn’t overt enough, the film also features a main character who works at McDonald’s and wears her uniform in every scene she appears in, most of which she wasn’t at work for. That’s not to mention the Oscar-worthy dialogue in which the family discusses how incredibly good Big Macs are.

As for Coca-Cola, along with being prominently featured in several scenes, either in characters’ hands or handily placed McDonald’s cups, it ends up being a key plot point later in the movie when the main character uses it to revive Mac’s ailing alien parents. Yes, this movie features a scene in which a character is shown bringing someone back to life by pouring Coca-Cola into their dying mouth. This is then immediately followed by a scene showing the same aliens risking detection to buy more Coca-Cola. Coca-Cola, along with Skittles are also the only things the eponymous Mac is shown to consume, with the latter being used to lure him out of hiding like a grotesque parody of the Reece’s Pieces scene in E.T.

The film also features a rather prominent plug for the department store Sears, when it is revealed the main character’s mother relocated her entire family to another state because she was offered a job there.

Unsurprisingly from all this, the director and screenwriter of the film, Stewart Raffill, noted the genesis of the film was hardly conducive to producing quality entertainment, despite its relatively high budget for the time:

Mac and Me? That was another movie where somebody called me up and he was a producer who had worked on quite a few films. He’d made a lot of big movies, but he decided he want to make his own movie. And he raised the money from one of the main partners at McDonalds—I think, like, the produce provider for McDonalds—and he put up the money to do that movie with the understanding that the proceeds from that movie would go to the Ronald McDonald Foundation.

So I was hired out of the blue. And the producer asked me to come down to the office. So I did and he had a whole crew there, a whole crew on the payroll. It was amazing. He had the transportation captain. The camera department head. The AD. The Production Manager. He had everybody already hired and I said, “Well, what’s the script?” And he said, “We don’t have a script. I don’t like the script. You have to write the script. You’re gonna have to write it quick so prep the movie and write the script on the weekends.”

Yeah, so I’d go and lock myself in a hotel on Friday night, write ’til Monday, anticipate what the locations were going to be, go out and find the locations, design the aliens and all that stuff. It was kind of a messy way to make a movie.

(Note: the producer in question, R.J. Louis, among many other movies, also produced The Karate Kid, Karate Kid Part II, and Ocean’s Eleven.)

One thing we can say for certain though is that although this movie has been rightly panned and called one of the worst movies of all time, it does feature a silver lining- Jade Calegory, the actor who played the main character, Eric Cruise.

Now for most actors this role would have been an embarrassing footnote they’d rather not discuss. (Fun fact: this movie was the first one Jennifer Aniston was ever in.) For Calegory, though, it was one of the defining moments in his young life, because, like his character, he too is disabled, having been born with spina bifida.

Why is this important? Well, to begin with, disabled characters in Hollywood films are almost always played by people who have no such disability, and this was even more so the case in the 1980s. But far more importantly, the film never makes a big deal about the character’s handicap. It isn’t an integral part of his character or plot and it isn’t played for laughs or sympathy; he’s refreshingly, and very purposefully, portrayed as just a normal kid doing otherwise normal things until he encounters his little alien friend.  The fact that he’s in a wheelchair isn’t even commented on by any character in the movie.

Moreover, the fact that the kid was in a wheelchair both in the film and in real life wasn’t overtly mentioned in the marketing campaigns either. As Raffill note, “…when they finished it was as if the fact that they used a real encumbered person to play the [character] didn’t mean anything to even the people who lived in the world.”

While in a perfect world this shouldn’t be notable in any way, as noted in a LA Times article from the time of the film’s release, this was (and still is) a huge deal because it marked one of the exceptionally few times in film history where a disabled actor had secured a role for a character that wasn’t “written disabled” and didn’t have the disability made into a defining character trait or plot element.

In stark contrast to this, Calegory later noted when he showed up for other auditions to play various disabled characters, not only were the characters always “written disabled”, but it was generally very obvious that the casting directors had no interest in hiring an actual disabled person. “They were just kind of bringing disabled people in there just to say they did, you know what I mean?”

Fitting then that in Mac and Me they found a boy, Calegory, who’d never acted before at the time and whose only real qualifications for the role was that he was a kid who had a disability, but was otherwise pretty much like any other young boy- exactly the message they were going for. Speaking of this, according to his mother, among Calegory’s many other childhood exploits, when he was five years old and literally only a few minutes out of the hospital after surgery and still in a full body cast, she turned her back on him for just a moment… only to turn back to find him flying by precariously perched spread-eagle on a skateboard he’d found somewhere.

Calegory later noted of his attitude on life: