The Truth About Lord Paget and His Leg 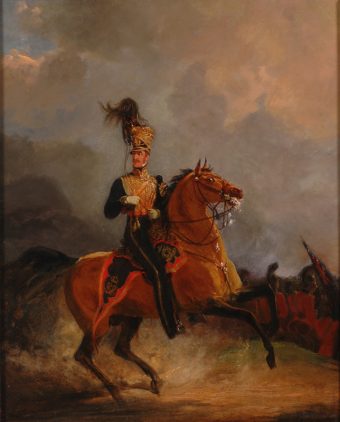 We British are a famously stoic people and notable figures from our history are often portrayed as being impossibly composed- facing unthinkable hardship and turmoil with a quiet, reserved dignity. Perhaps no man in history has ever typified this stereotype better than Henry Paget, a man who by all accounts reacted to his leg being blown off and then amputated (without the benefit of an anaesthetic) like he was patiently waiting for water to boil so he could pour a good cuppa.

Known variously as the 1st Marquess of Anglesey, the Earl of Uxbridge or more simply, Lord Paget, Henry Paget is an almost mythical figure in British military history, famed for his unflappable demeanour and fearlessness in battle during the Napoleonic Wars.

Prior to the war, he famously courted (and eloped and subsequently had ten children with) the wife of the Duke of Wellington’s brother while the pair were both still married, infuriating the Iron Duke. This ultimately led to a duel with the lady in question’s brother, Colonel Henry Cadogan. During the duel, Cadogan fired at Paget but missed. Rather than take careful aim and fire back, as was his right, Paget refused to shoot and the duel ended.

Six years later, Paget was assigned as the Duke of Wellington’s second in command before the battle of Waterloo, much to the Duke’s chagrin. Nevertheless, during the battle, Paget’s performance was nothing short of heroic, reportedly having eight horses shot from under him, each time calling for another and soldiering on.

Speaking of horses shot out from under him, very near the end of the battle, Paget was riding alongside Wellington, discussing the battle with the Duke, when out of nowhere case shot ripped through both Paget’s horse and the lower region of his right leg, sending him crashing to the ground.

Unfortunately (because it’s hilarious and quite possibly the most stereotypicaly British way to note that one has suddenly unexpectedly lost a leg), we could find no direct evidence that this exchange occurred this way. It’s just something that is widely repeated, even by extremely reputable sources. And while it certainly is in-line with Paget’s legendary stoicism (better documented examples of which, you’ll soon read), it seems unlikely Paget actually said this as he had not lost his leg at all at this point; it was still very much attached and it wasn’t clear at this stage whether it would need amputated.

The only evidence of what Paget may have actually said after getting his leg punched full of holes comes from the diary of one J.W. Croker, written a little over three years later on December 8, 1818. Croker wrote that Horace Seymour, who was present when Paget was shot and helped carry him off the field, told him that Paget exclaimed directly after being hit, “I have got it at last!” And the Duke replied, “No? Have you, by God?”

Of course, this is somewhat tenuous evidence, but at least has a contemporary source to back it up, unlike the “By God, sir, I’ve lost my leg!” exclamation.

Whatever the case, those attending to Paget immediately after his injury noted that he was remarkably reserved in spite of the crippling pain he was undoubtedly feeling. For example, shortly after the incident, one Thomas Wildman noted that Paget smiled and stated, “I have had a pretty long run. I have been a beau these 47 years and it would not be fair to cut the young men out any longer.”

Paget was similarly nonplussed while being examined by the doctor. Deputy Inspector of Medical Staff John Robert Hume would later state:

His lordship was perfectly cool, his pulse was calm and regular, as if he had just risen from his bed in the morning, and he displayed no expression of uneasiness though his suffering must have been extreme…

After being informed by Hume that his leg needed to be amputated, Paget simply replied, “Very well, I am ready”.  Once Hume then told him he was about to begin, he stated Paget replied, “Whenever you please”.

Throughout the amputation, which was conducted without any anaesthetic, Paget lay calmly and, according to Hume, he “neither uttered groan or complaint nor gave any sign of impatience or uneasiness.”

After the amputation was finished and the wound sealed, Hume took measurements of Paget’s vitals and was astounded to find that his pulse was still a calm and collected 66 BPM and his skin was “perfectly cool”.

This lead Hume to later recall, “So far was he from exhibiting any symptoms of what he had undergone in his countenance that I am quite certain, had anyone entered the room, they would have inquired of him where the wounded man was.”

Indeed, according to Lieutenant General Richard Hussey Vivian, who commanded the 6th Brigade of Paget’s Cavalry Division, very shortly after the leg was removed, Vivian entered to find Paget quite collected. Paget, upon seeing his officer, exclaimed to him,

Ah, Vivian! I want you to do me a favour. Some of my friends here seem to think I might have kept that leg on. Just go and cast your eye upon it, and tell me what you think.

Vivian later recalled, “I went, accordingly and, taking up the lacerated limb, carefully examined it, and so far as I could tell, it was completely spoiled for work. A rusty grape-shot had gone through and shattered the bones all to pieces. I therefore returned to the Marquis and told him he could set his mind quite at rest, as his leg, in my opinion, was better off than on.”

Following his recovery, Paget refused to acknowledge that he’d done anything other than his duty, turning down a large (for the time) £1,200 annual pension (by purchasing power today this would be about half a million pounds per year) to compensate him for the loss of his limb. He then went on to live a long, full life, dying at the ripe old age of 85.

But this isn’t the end of the story, because we still have to talk about what Paget’s leg did after the war. You see, after Paget’s leg was amputated, the owner of the house he had it amputated in, Joseph-Marie Paris, asked the lord if he could bury it in his garden. Paget, seeing no use for the ruined limb anymore, gave Paris permission to do as he wished with the appendage.

Paris, true to his word, buried it in his garden, making its final resting place with a large tombstone bearing a flowery epitaph that read:

Here lies the Leg of the illustrious and valiant Earl Uxbridge, Lieutenant-General of His Britannic Majesty, Commander in Chief of the English, Belgian and Dutch cavalry, wounded on the 18 June 1815 at the memorable battle of Waterloo, who, by his heroism, assisted in the triumph of the cause of mankind, gloriously decided by the resounding victory of the said day.

The grave eventually became something of a tourist attraction, the profile of which was raised considerably when notable figures like the Prince of Orange and the King of Prussia visited it. After a storm tore up a large portion of Paris’ garden in the late 19th century, exposing the bones of the leg to the elements, Paris’ descendants put the remains on display and began charging people to see them as part of a museum.

Upon discovering that the bones were now on display in 1878, Paget’s son demanded that the remains be returned to England. The Paris family agreed… if the Paget family paid them to compensate for the loss of the attraction.

They then used the full might of their family influence to get their way, at one point convincing the British government to threaten to cut off all trade with Belgium if the remains of the leg weren’t returned. Eventually, the Belgian Minister of Justice intervened, citing an ordinance that stated all human remains must be interred in a cemetery. He then ordered the bones be buried in such a place.

What happened after isn’t fully clear and, unfortunately, documented evidence is once again scant despite the events after often widely being reported as definitive. In truth, there are two accounts- one that the bones were indeed buried in a cemetery as ordered. Alternatively, it is widely stated that the curator of the museum took the bones and hid them in his attic. In 1934, his widow supposedly found them and, remembering the threats issued against her family last time they were uncovered, ordered a maid to dispose of them in the furnace.