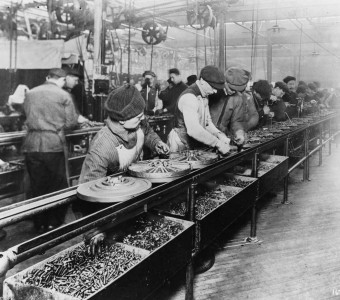 On September 25, 1926, the Ford Motor Company instituted a five-day, 40-hour work week for its factory employees. While Ford wasn’t the first to do this, they were arguably one of the most influential.

This action, at least initially, did not win Ford many friends among his fellow business owners, some of whom believed giving the working man any time off just encouraged them to indulge in drink even more than they already did. (To be fair, that was a real problem around this era. It was not from nothing that excessive drink was blamed for many of society’s woes at the time, ultimately inspiring Prohibition, which even a very large percentage of said drinkers supported in the beginning. But, of course, if you had to work 14-16 hour days, 6 days per week from your very early teen years on- for reference in 1890 the average work week in the United States for a blue-collar factory worker was 90-100 hours- you might be driven to drink excessively too. ;-))

Beyond this, many competing employers were still miffed at Ford for raising his (male) workers’ salaries up to five dollars per day (about $116 today) back in 1914, double the former going rate, and around the same time cutting the typical work week down to 48 hours at his factories. (Women had to wait until 1916 to command the same wage.) But since Ford was one the world’s largest manufacturers, most in the industry were compelled for various reasons to follow their example, like it or not.

Ford stated in his company’s newsletter,

Just as the eight-hour day opened our way to prosperity in America, so the five-day work week will open our way to still greater prosperity … It is high time to rid ourselves of the notion that leisure for workmen is either lost time or a class privilege.

Of course, Ford wasn’t just doing this out of the goodness of his heart. He understood that a five-day work week with “eight hours labour, eight hours recreation, eight hours rest” would encourage working people to vacation on weekends, shop on Saturdays, and have ample free time to fill during their daily 8 hour recreation time. (See: Why a Typical Work Day is Eight Hours Long) People with more leisure time required more clothing, ate a greater variety of food and, of course, were far more likely to be in the market to buy an automobile to travel around in. Workers who were paid more also were more likely to be able to afford such an automobile.

Beyond benefiting sales as other companies followed suit, he had also observed that happy workers (both in their home and work life) meant better and more efficient workers.

Now, Ford expected his workers to produce in those shorter working hours, but with the higher pay and weekends off, there were very few complaints from any of his employees. They were happy to put the pedal to the metal Monday through Friday for their excellent salary and five-day, 40 hour work week.

As Ford had thought, after instituting these changes, productivity skyrocketed, meaning he was getting more results from significantly fewer work hours and company loyalty and pride among Ford employees was equally boosted. Beyond low-skilled laborers banging down the doors to get work at Ford, he also now had the luxury of having the top talent in each of the high-skilled fields he needed workers for applying in droves. Needless to say, manufacturers all over the world would soon follow Ford’s example, which played right into his hands.

Edsel Ford, Henry’s son and then company president, was quoted in March of 1922 in the New York Times as saying of all this, “Every man needs more than one day a week for rest and recreation….The Ford Company always has sought to promote [an] ideal home life for its employees. We believe that in order to live properly every man should have more time to spend with his family.”

Ford himself laid it all out in black and white:

The harder we crowd business for time, the more efficient it becomes. The more well-paid leisure workmen get, the greater become their wants. These wants soon become needs. Well-managed business pays high wages and sells at low prices. Its workmen have the leisure to enjoy life and the wherewithal with which to finance that enjoyment.