July 14, 2016 Karl Smallwood
Randal T. asks: When someone makes some giant food item for publicity, what do they actually do with the thing after? 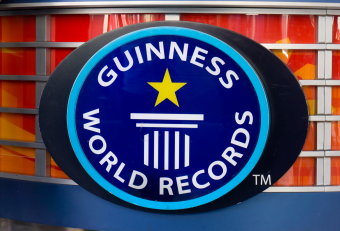 According to Guinness World Records, the de-facto authority on world record breaking, this is one of the most common questions they’re asked alongside “What record is broken the most often?” (the heaviest object lifted with glue according to them) and “Who holds the most Guinness World Records record titles?” (Ashrita Furman with 125 records at last count). Since we’ve also gotten this question a few times from readers over the years, we figured it’s high time we looked into the answer.

In regards to records involving comically giant food, as of 2011, Guinness has a policy in place that all giant food or records involving large amounts of food, such as most pizzas made in 24 hours (7,539 by a team of Domino’s employees in Queensland in 2012), must be either donated, consumed or sold for consumption for the record to be recognised as official. This stipulation was put in place for a number of reasons, but was mostly added to prevent such a large amount of food going to waste, something Guinness was being criticised for encouraging.

Guinness allows those attempting records to choose between selling or donating giant food in acknowledgement of the fact that such records often require a considerable amount of money and the option of selling it allows some of that money to be recouped. A second, and perhaps less obvious, reason for this particular stipulation is that it means the food produced, whatever it may be, has to be edible, making it much harder to break some of these giant food records.

For example, when a company called Juicys Outlaw Grill attempted to create a record breaking 770 pound burger in 2011, their initial attempt failed when they were unable to cook the 600 pound beef patty they’d made all the way through– meaning the entire burger could not be eaten and thus, they were unable to fulfill all of Guinness’ stipulations to a satisfactory degree, even though they technically did make a 770 pound burger. The company did eventually succeed at breaking the world record and now holds the record for selling the largest commercially available hamburger in the world. The price? A mere $5000 dollars for over one million calories of burgery goodness, give or take depending on the fat content. And if you’re curious, a typical beef cow yields about 450 pounds or about 200 kg of usable meat. So this world record attempt was essentially about one and a third cows worth of meat or about 6000 McDonald’s hamburgers.

A further stipulation of creating giant food for a world record attempt is that it must generally resemble the original foodstuff it is based on. For example, a stipulation of creating a giant popsicle is that the final product must be able to stand upright like a regular popsicle without falling apart. This is a rule the company Snapple were unable to abide by when they attempted to create a record breaking 35,000 pound stick of frozen goo in 2005 and inexplicably tried to erect it in the middle of New York in June…

Despite careful preparation before hand and keeping the giant popsicle frozen during transport to its final destination, the kiwi-strawberry popsicle melted before it could be propped up, resulting in thousands of litres of pink, sugary liquid shutting off several lanes of traffic while a bemused fire crew used hoses to wash it down into the sewers.  Presumably the rats and other such creatures appreciated Snapple’s efforts, even if they didn’t get the world record. Perhaps next time they should think about doing it in December.

Of course, because Guinness isn’t always invited along to giant food cook-offs, there’s nothing to really stop companies or individuals that create giant food from throwing it away after the attempt is complete; it’s just that if they do, the most recognisable world record recording entity won’t give them a plaque acknowledging their achievement. This means the group in question won’t get near the publicity, which is generally the point of these sorts of things. On top of that, if they aren’t making the food item edible, they just completely wasted their money on the raw ingredients for no good reason. Needless to say, officials from Guinness are often invited to such events and, even when not, the food item is generally meant to be eaten after.