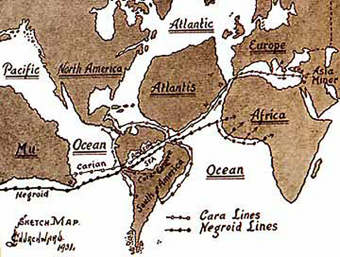 Thousands of years younger than the tales of its fabled cousin, Atlantis, the lost continent of Mu was first proposed in the mid-19th century to explain the phenomenon of similar symbols, architecture and myths found in otherwise disparate, ancient cultures around the world. Unfortunately for adherents to the idea, there is no empirical evidence to support its existence or the theories of its demise.

Ancient Aliens aside… it’s hard not to notice that both the Mayans and Egyptians built pyramids, that ancient people from around the world (including Hindu, Greek, Ojibwa, Cañari, Sumerian and Hebrew) all share a similar flood myth, and that cultures as far away as Easter Island and Egypt have similar names for the Sun (ra’a and Ra). So, it’s easy to see why people develop theories to explain the resemblance that involve a common, ancient source.

Accordingly, in the late 19th century, Augustus Le Plongeon first published his idea of Mu, in Queen Móo & the Egyptian Sphinx (1896). Le Plongeon, who had explored some Mayan sites, claimed that writing found at the ruins indicated that Mayan civilization was older even than that of Egypt, and dated back to an earlier, lost continent.

Naming it Mu, Le Plongeon’s lost continent was doomed from the start since the word, Mu, ostensibly meaning a land that had been submerged after a catastrophe, was itself a mistranslation. Undeterred and conflating what he thought was a story of a lost land with the myth of Atlantis, Le Plongeon decided that his Mu had been a continent peopled by an advanced civilization that had, in ancient times, sunk into the Atlantic Ocean.

Refugees from that catastrophe, according to his theory, then fled to regions throughout the Earth, with some making their way to Central America to become the Mayans, and others, led by (I’m not making this up) Queen Móo, founded ancient Egypt.

Unlike Le Plongeon, however, Churchward focused his research in India where, he claimed, he had found ancient clay tablets kept by a high-ranking priest, containing writings in a lost language that only he and two other people could read. These tablets, according to Churchward, told of “the place where man first appeared – Mu.”

Combined with other information he said he garnered from the 2,500 or so tablets found by William Niven in Mexico (see below), Churchward formed a vivid narrative of Mu as the home of an advanced civilization where the Naacal thrived from 50,000 to 12,000 years ago. At the time of Mu’s demise, the continent was said to contain many large cities as well as colonies on the other continents, and Mu, itself, was home to 64 million people.

Also unlike Le Plongeon, Churchward claimed Mu was situated in the Pacific Ocean, stretching from the Marianas to Hawaii to Easter Island to Mangaia, and the catastrophe that marked its doom was essentially a super volcano – an expansion of underground gases that led to a series of earthquakes and eruptions that ultimately sank the entire continent.

Much like Atlantis, modern dreamers continue to be enthralled with Mu, and not necessarily without reason. For many, “mainstream scientists'” explanations of sites such as massive Moai in Easter Island and the underwater features of Yonaguni Island, Japan are unsatisfying, while the thought of a great, ancient Mu is far more appealing.

But scientists aren’t backing down, either, and for several reasons. Archaeologists argue that: (1) evidence demonstrates that Old and New World cultures developed independently; (2) agriculture and urban societies developed in the Levant and spread outward circa 10,000 years ago; and (3) genetic studies do not support the Mu theory. Likewise, geologists variously assert: (1) under the theory of plate tectonics, it’s impossible for an entire continent to actually sink; (2) just changing the shape of an entire continent, such as when Pangaea split, would take millions of years (and could not happen overnight); and (3) were the massive foundations of a continent to be blown apart by volcanic action, its enormous base (sial) rocks would be seen today on the ocean floor – and they’re not.

Nonetheless, there are continental sized landmasses that, today, are submerged beneath the waves, either due to geological upheavals, erosion or simply rising seas; and, in fact, a new submerged continent was discovered in 2013 that some call the Brazilian “Atlantis.” Of course, that “Atlantis” was never visible or livable in the modern era, as it likely was lost when the Atlantic Ocean was formed as Africa and America drifted apart – about 100 million years ago.