Is Pet Food Safe for Humans to Eat?

June 16, 2016 Matt Blitz
Marcus G. asks: If I had nothing else to eat, could I eat my dog’s food without getting sick from it? 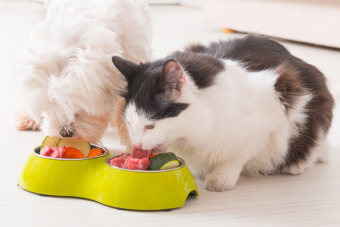 Nearly 80 million American households have a pet, with a majority being a cat or dog. Additionally, 42% of homes have more than one pet. A lot of food is needed to feed all of these animals, so it should come as no surprise that pet food is a 21 billion dollar industry. While this food is specially made for our four-legged pals, the question many have (including this researcher) is- in a post-apocalyptic world where human food was scarce, could I eat my cat’s wet food? Would I get sick from eating my dog’s milk bones?

For the short answer, while it certainly doesn’t look appetizing, nor (probably) taste any good, the answer is, for the most part, yes- humans can safely eat their pets’ food… but there are some important caveats which we’ll get into. For the long answer, let’s look at a brief history of pets and their food and what manufacturers put in it today and why.

It is theorized that dogs first became man’s best friend sometime during the Ice Age, between 19,000 and 32,000 years ago. It’s thought that the first dogs were simply tame wolves. Their domestication likely was associated with the wolves realizing they could get a quick and easy meal if they hung out near human gathering sites, feasting on the leftover meat of the humans’ hunt. The domestication of cats came much later, perhaps about 3000-10,000 years ago, with the first potentially domesticated cat discovered in a 9,500 year old grave. That said, the mass domestication of cats probably occurred at least a few thousand years after that and was directly related to the proliferation of agriculture. The theory goes that as humans started storing grain and wheat, mice came along to eat it. As we all know, the natural (and cartoon) enemy of mice are cats. (Aside: as we also all “know,” mice love cheese… except they don’t actually, and will even sometimes be actively averse to it.)

Over thousands of years, both animals have evolved or been bred to have certain traits become more pronounced or disappear entirely. In terms of physical characteristics, domesticated dogs today have smaller skulls, paws and brains than their wolf ancestors. Dogs have also adjusted their behavior, becoming active during the day as opposed to nocturnal like they once were.

Today’s house cats, which haven’t been so deliberately bred, aren’t that much different than the wild cats of yesteryear, at least physically. Domestic cats may be slightly smaller than their ancestors, but it is really their genetic and personality traits that separate them from their forebears. For instance, present-day cats are thought to be more docile and have better memories than their ancestors.  Essentially, cats over time evolved such that they’re more likely to purr than hiss, with the latter cats less likely to get food from humans, providing them a decided disadvantage over cats more comfortable around us.

Because of these changes (and a more sedentary lifestyle due to be domesticated), both animals have developed to require fewer calories and slightly different dietary requirements than their ancestors, who primarily lived off of raw meat.

This brings us to what these animals should be eating today, and what is generally included in their commercial pet foods. Dietary needs for a dog differ from other animals, including humans. Canines need more fat than humans, which is their primary energy source. While dogs also need protein (which helps build muscle mass) and some amount of carbohydrates (which helps with digestion), human diets require more. In addition, dogs produce their own vitamin C and don’t need it included in their food. Despite the differing dietary requirements, in the end, today’s dogs eat much like their ancestors – consuming the leftovers of humans, whether you feed them from the table or not. You see, commercial dog food products are often simply made from “the byproducts of human food production,” as in what’s left over after humans have taken what we want of the meat.  And this is perfectly fine, according to the Association of American Feed Control Officials, provided the recipe is formulated specifically for a dog’s dietary needs.  It also means that dogs have adapted to be able to eat a large variety of foods.

On the other hand, cats do not eat like dogs, nor should they be eating dog food or a typical human diet. For one, cats need to eat more meat due to the presence of an amino acid called taurine, which is only found in animal-based proteins. Unlike humans and other animals, cats are unable to manufacture their own taurine and, therefore, need to get it from their food sources. If they don’t, they relatively quickly, and permanently, go blind, among other health issues. Additionally, since cats are “obligate” carnivores – as in, they must eat meat in order to get the nutrients they require – animal-based proteins are essential for felines.

Despite this fact, many dry cat foods use primarily plant based protein. Dry cat foods are also not typically optimal for our feline friends owing to the fact that they do not have a strong sense of when they’re dehydrated. You see, cats at one point were desert animals and their bodies are still optimized for desert-like conditions- able to withstand temperatures as high as 126° F to 133° F (52° C to 56° C) before showing signs of being overheated and their feces is typically very dry and their urine highly concentrated, allowing them to potentially stay hydrated off nothing but the water they get from eating animals.

While cats that eat a dry food diet do drink more water than their wet food diet compatriots to make up for the discrepancy, studies have shown that, in the general case, their total daily water intake is generally less than optimal, likely due to their weak thirst “sense”. Thus, if they are not getting a significant amount of moisture from their food, as they would in the wild, many cats tend to live in a perpetually mild dehydrated state.  For reference, most wet cat foods are about 75% water (about what they’d get from eating animals in the wild) vs. most dry cat food at about 5%-10% water.

The combination of many dry cat foods primarily being based on plant-based protein and lacking much in the way of moisture is generally thought to be why many house cats ultimately develop diabetes and kidney problems, among other related issues, later in life. That’s not to say all dry cat foods are inherently bad (some are made of very high quality meat-based proteins and the like, and simply suffer from a lack of moisture) nor all wet cat foods are inherently good for your cat (some are packed with unhealthy amounts of fats and the like). In either case, the order of the ingredients is key here, with the first item on the list being the primary ingredient and on down. Cats also need more thiamine, Vitamin A and Vitamin C than dogs and humans. Without food that specifically has these elements, cats will be undernourished.

This brings us back to humans. In theory, given the human body’s ability to adapt to a wide variety of food sources, humans are able to eat both dog and cat food, whether wet or dry, high quality or not… in a limited quantity.

For instance, regular high intake of animal based Vitamin A (which, as mentioned, pet foods tend to have a relatively high amount of) in humans can cause a myriad of serious, even fatal, complications. For this reason, good quality vitamin supplements (which are harder to find than you might think) generally use plant based Vitamin A via carotenoids, like beta-carotene.  In this case, if your body needs more Vitamin A, it will convert the beta-carotene to Vitamin A; if it doesn’t need it, it won’t. In contrast, a meat-based Vitamin A source is already in the form your body needs, meaning you can potentially get too much of it in your system. This is particularly a concern for pregnant women.

So, in the end, while it is possible for a human to subsist for a time on dog and cat food, there is the general caveat that these animal foods are specifically formulated for the particular animal and not meant to meet the dietary requirements of humans, though irregular consumption of these foods shouldn’t hurt you. In other words, cat food shouldn’t be your breakfast every day. Of course, this hasn’t stopped other writers and publications from attempting this very thing as a stunt. Nor did it stop a pet store owner from eating dog treats for thirty days as a way to promote her store. She was later featured on the Today Show. There’s also the TLC show “My Strange Addiction” with one episode focusing on one person’s cat food fascination.